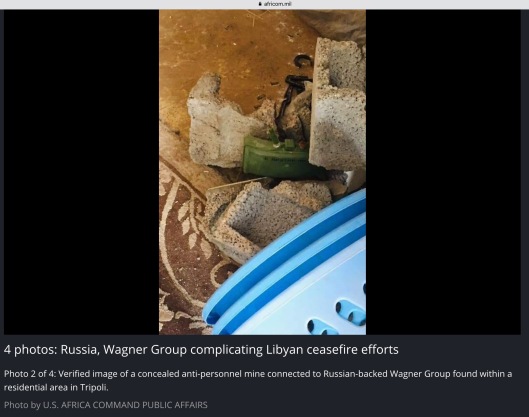 Wagner Group is sort of a Russian “Blackwater” group. Wagner is owned by “Putin’s Chef”, Prigozhin, who also had a 2016 US election troll farms (including Internet Research Agency).

Verified photographic evidence shows indiscriminately placed booby-traps and minefields around the outskirts of Tripoli down to Sirte since mid-June. These weapons are assessed to have been introduced into Libya by the Wagner Group.
“The Russian-state sponsored Wagner Group is demonstrating a total disregard for the safety and security of Libyans,” said U.S. Marine Corps Maj. Gen. Bradford Gering, director of operations, U.S. Africa Command. “The Wagner Group’s irresponsible tactics are prolonging conflict and are responsible for the needless suffering and the deaths of innocent civilians. Russia has the power to stop them, just not the will.”

In late May, AFRICOM reported that at least 14 Mig-29s had been flown from Russia to Syria, where their Russian markings were painted over to camouflage their Russian origin. The aircraft were then flown into Libya, a violation of the United Nations arms embargo. AFRICOM assesses that the warplanes were being actively flown in Libyan airspace, further complicating the conflict in Libya and elevating the risk of miscalculation.

Russia’s introduction of landmines, booby traps, attack aircraft, and their continued support of the 2,000-person strong Wagner Group in Libya changes the nature of the current conflict and intensifies the potential risk to non-combatants.

Russia’s use of PMCs in Libya is just part of a long history of using these non-state actors as tools of power projection. Russian-sponsored PMCs are active in sixteen countries across Africa“. https://www.africom.mil/pressrelease/33008/russia-wagner-group-complicating-libyan-cease