Who told Trump to use this phrase? It has to be Roger Stone, or someone similar to him. Perhaps a former KGB agent, apart from Roger Stone, who could have been KGB himself. Roger Stone is still at large and not yet in jail. “Trump did not coin the phrase “when the looting starts, the shooting starts.” The line is half a century old, and combative Miami Police Chief Walter Headley Jr. originally used it during the height of civil rights protests in the 1960s.” See: “The Racist Origins Of Trump’s ‘When The Looting Starts, The Shooting Starts’ Quote: A line originally used by an aggressive Miami police chief prompted Twitter to issue another content warning for the president’s tweets“. By Sara Boboltz, 5/29/2020: https://www.huffpost.com/entry/trump-looting-starts-shooting-starts_n_5ed0fce6c5b6a2136472be03 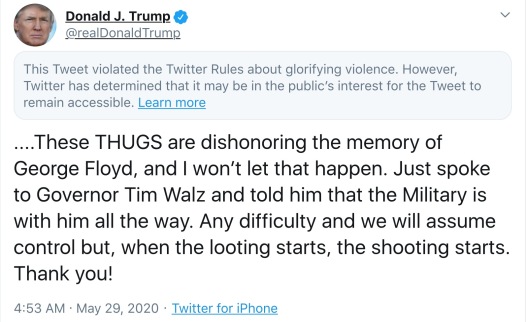 The tweet appears to have been initially hidden and then later flagged.
From TheGuardian.com:
“Twitter hides Donald Trump tweet for ‘glorifying violence’
Warning on ‘when looting starts, shooting starts’ post risks further escalation of row between firm and president
By Alex Hern [1] UK technology editor
Fri 29 May 2020 17.57 BST 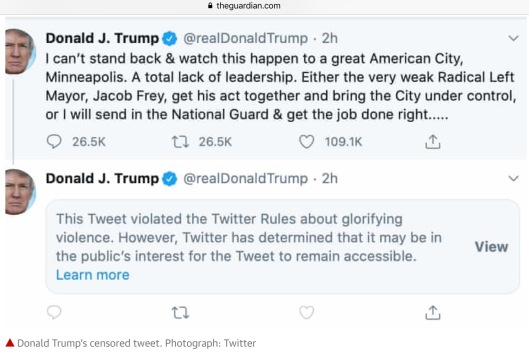 Twitter [2] has hidden one of Donald Trump’s tweets behind a warning that it “glorifies violence”, further escalating the social media company’s row with the US president.

The US president’s tweet, posted on Thursday night Washington time, warned people in Minneapolis protesting against the killing of a black man, George Floyd [3], by a white police officer that he would send the military to intervene if there was “any difficulty”.

The warning was accompanied by a link to its policies [6] about public interest exceptions.

Users who try to reply to the tweet are instead presented with a second notice that reads: “We try to prevent a tweet like this that otherwise breaks the Twitter rules from reaching more people, so we have disabled most of the ways to engage with it.”

Existing replies no longer appear below it.

The tweet’s spread will also be limited by Twitter’s algorithms, according to the company’s policy documents.

Early on Friday morning, the Trump administration responded by sending an identical tweet from the official White House account, placing Trump’s words in quotation marks [7], which was duly hidden by Twitter in turn. Trump himself sent several angry tweets, accusing Twitter of “doing nothing about all of the lies & propaganda being put out by China or the Radical Left Democrat Party”, and warning that “it will be regulated!”

The back and forth suggests neither Twitter nor Trump has any intention of backing down in their dispute, which erupted on Wednesday [8] when the company applied a fact-checking label to the president’s tweets for the first time.

He had tweeted an accusation that California was using mail-in ballots to ensure a “rigged election” to which Twitter added a label reading: “get the facts about mail-in ballots”, which had a link to a “Twitter-curated” set of fact checks.

In response, the president signed an executive order [9] that aims to remove Twitter’s protections against civil claims in cases where it acts as an “editor” rather than a publisher. 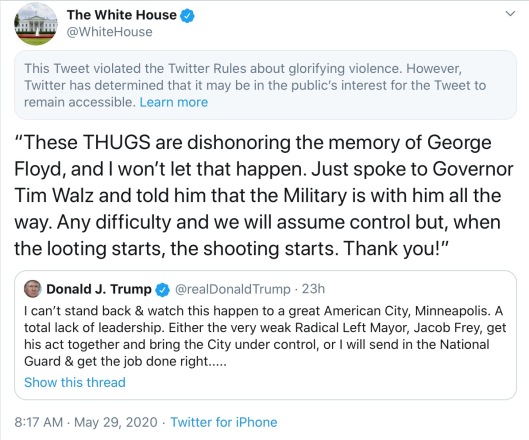