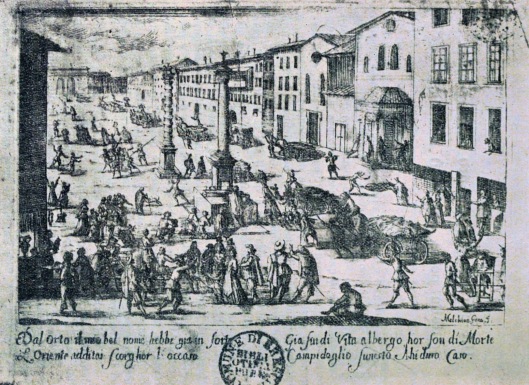 Melchiorre Gherardini, Piazza S. Babila, Milan, during the plague of 1630: plague carts carry the dead for burial.
The dates for the start of the outbreak can be found here: https://en.wikipedia.org/wiki/Timeline_of_the_2019–20_coronavirus_outbreak_in_December_2019_–_January_2020
From VOA News:
“Coronavirus Outbreak
Italy’s Coronavirus Death Toll Spikes as Lockdown Takes Effect
By VOA News
Updated March 09, 2020 03:21 AM
China on Monday reported its lowest number of new coronavirus cases, while about one-quarter of Italy’s population was under quarantine orders and passengers from a cruise ship prepared to disembark in the western U.S. state of California after some tested positive for the virus.

Chinese health officials said there were 40 new cases, the lowest there since January just before the government put in place strict restrictions on travel and gatherings in a number of cities.

China on Monday reported its lowest number of new coronavirus cases, while about one-quarter of Italy’s population was under quarantine orders and passengers from a cruise ship prepared to disembark in the western U.S. state of California after some tested positive for the virus.

Chinese health officials said there were 40 new cases, the lowest there since January just before the government put in place strict restrictions on travel and gatherings in a number of cities.

Italy began its lockdown in the northern part of the country, including the regions containing the cities of Milan and Venice, Sunday as the death toll spiked by 133 to 366.

Travel into and out the areas will be highly restricted until early next month, as the country seeks to slow the tide of fatalities from the virus. Museums, theaters, cinemas and other entertainment venues have also been ordered to close nationwide.

In the United States, there have been 21 deaths from the virus and more than 500 cases reported.

The Grand Princess cruise ship has waited off the coast of California as local and federal officials developed a plan for handling its passengers and crew, some of whom have tested positive for the virus.

Carrying multiple people who have tested positive for COVID-19, the Grand Princess maintains a holding pattern about 30 miles off the coast of San Francisco, March 8, 2020.

It is expected to dock in the city of Oakland on Monday to let the passengers get off.  Those who are California residents will be taken to military facilities in the state to wait out a 14-day quarantine, while residents of other states will be taken to bases in Texas or Georgia.

The U.S. Centers for Disease Control and Prevention said the State Department is working with the home countries of several hundred foreign passengers to arrange getting them home.

The cruise line said the crew will remain on the ship and depart after the passengers leave.

With a confirmed coronavirus case in the area of Indian Wells in southern California that hosts the BNP Paribas Open, tournament officials announced the event will not be held.  It was due to begin this week with a field including such stars as Rafael Nadal, Novak Djokovic, Serena Williams and Naomi Osaka.

Two members of Congress have also said they are self-quarantining after having contact at a recent conference with someone who has tested positive for the coronavirus….

Globally, the World Health Organization said that 100 countries are now reporting coronavirus cases with more than 106,000 people reported as being ill, while deaths have surpassed 3,500.

“While very serious, this should not discourage us,” said WHO Director-General Tedros Adhanom Ghebreyesus. “There are many things everyone, everywhere can and should do now.”

Tedros praised Italy for “taking bold, courageous steps aimed at slowing the spread of the coronavirus (and) protecting their country. They are making genuine sacrifices.” He said the WHO “stands in solidarity” with Italy and “is here to continue supporting you.” https://www.voanews.com/science-health/coronavirus-outbreak/italys-coronavirus-death-toll-spikes-lockdown-takes-effect

From VOA News:
“Coronavirus Outbreak
Political Backlash Mounts to Coronavirus Lock-Down in North Italy
By Jamie Dettmer
Updated March 08, 2020 04:20 PM
Train stations in northern Italy were stormed with thousands of Italians, many of them students, trying to flee the regions of Lombardy and Veneto, ahead of the implementation of a government order Sunday quarantining a swathe of northern Italy, including the cities of Milan and Venice.

The lock-down order, the most dramatic and widespread effort at containing the spread of coronavirus outside China, prompted the fury of regional governors in the south of the country, who warned the exodus risked accelerating the contagion.

They accused the government of Prime Minister Giuseppe Conte of mishandling the lock-down by allowing the draft decree to be leaked to the media ahead of its implementation, and they questioned why train services services and flights weren’t halted in the run-up to its implementation.

The president of the southern region of Puglia, Michele Emiliano, reacted by signing an order of his own requiring anyone arriving from Lombardy and northern provinces badly hit by the virus to quarantine themselves. He urged on social media all those heading to his region, including Apulians, to stop and go back, accusing them of bringing the  virus to Puglia. “You are carrying the virus into the lungs of your brothers and sisters, grandparents, uncles, cousins and parents,” he said.

Lazio, anther southern region, followed Puglia’s lead and issued Sunday an order requiring anyone who enters the region from the north to notify local authorities of their presence and to observe a home stay until evaluated by public health officials.

Military personnel are seen on Duomo square after the Italian government imposed a virtual lockdown on the north of the country, in Milan, March 8, 2020.

The lock-down applies to some 10 million residents in Lombardy — which includes the country’s commercial capital Milan — and another six million living in another 16 northern provinces. Venice, Modena, Parma, Treviso and Venice are included in the order. Previously only 10 towns in Lombardy and one town in the Veneto had been shuttered.

The decree came just hours before the country’s Civil Protection Agency reported another jump in confirmed cases and Coronavirus deaths, from Saturday’s 5,883 to 7,375. The total death toll has also climbed from 233 to 366, a nearly five percent fatality rate and much higher than seen in other stricken countries.

Northern governors also reacted with anger at the unprecedented decree signed overnight, saying they had not been consulted and had no chance to shape the order. The president of the Lombardy region, Attilio Fontano, a member of Matteo Salvini’s populist Lega party, said the proposals “go in the right direction”, but were a “mess.” Some aspects of the decree do not go far enough, he said. And he criticized parts of the decree for being confusing.

His counterpart in the neighboring region of Veneto, Luca Zaia, said: “We have seen these measures at the last minute. We did not help to draw them up, and now we are being asked to give our assent almost at once. It is literally impossible.” He said he had been highly supportive of the government in the battle to halt the spread of the virus. “I have never allowed myself to disagree, even if there were measures that sometimes I would have done in another way.” But he criticized the inclusion of some Veneto provinces he says shouldn’t have been added to the list.

The president of Piedmont, Alberto Cirio, said many mayors shrieked when they learned their towns were included in the decree and are furious they were not updated by the government or forewarned, despite the fact their role will be crucial for the enforcement of the new containment provisions.

From Milan to Venice there was panic and confusion. As news circulated about the upcoming decree, bars and restaurants emptied of customers, many of them heading to grab belongings before rushing to train stations, all fearful of being stuck in the north. At Milan’s central station hundreds of passengers crowded on to trains heading away from the city. Many wore face-masks and gloves. The scene was repeated in stations across the north.

“I read two hours ago that they may be putting out an urgent decree putting Padua in the red zone. Because I would like to return down south to my relatives, I decided to go earlier,” student, Roberto Pagliara told AP.

The mayor of Asti, in the Piedmont region, parts of which are included in the lockdown, posted an furious video on his Facebook page, condemning the government in Rome for not keeping local civic leaders appraised. “Nobody told me,” Maurizio Rasero said.“ It’s incredible that information that is so delicate and important would come out in the newspapers first.”

At a news conference, Prime Minister Conte defended the decree, saying, “I take political responsibility.” He added: “For Lombardy and for the other northern provinces that I have listed, there will be a ban for everybody to move in and out of these territories and also within the same territory,” Conte said. “Exceptions will be allowed only for proven professional needs, exceptional cases and health issues,” he added.

He explained it is not an “absolute ban,” saying, “everything does not stop,” and that trains and planes should continue to run. But the police will be able to question people and ask them why they are moving,” he added. As a political backlash to the order mounted. Conte urged Italians to show responsibility. “We will make it,” he said.

It remains unclear what foreign tourists in the affected areas are meant to do — no mention was made of them in the decree. But a government official told VOA they would likely be allowed to leave, but he was unclear about what bureaucratic hurdles they might have to navigate.

Under the order, which will stay in effect to at least to April 3, bars and restaurants will have to close at 6pm and the owners must ensure customers are at least one meter apart. Anyone with a fever should stay at home and those people asked by local authorities to quarantine at home are strictly prohibited from going out. Fines and jail terms can be imposed on anyone leaving towns or provinces covered by the order.

Amid the criticism from some in Italy over the handling of the lock-down, the head of the World Health Organization, or WHO, Tedros Ghebreyesus, praised Conte. In a tweet, he said: “The government & the people of are taking bold, courageous steps aimed at slowing the spread of the #coronavirus & protecting their country. They are making genuine sacrifices. @WHO stands in solidarity with & is here to continue supporting you.”

In a statement Saturday, WHO called on “all countries to continue efforts that have been effective in limiting the number of cases and slowing the spread of the virus.” It added: “Allowing uncontrolled spread should not be a choice of any government, as it will harm not only the citizens of that country but affect other countries as well.” https://www.voanews.com/science-health/coronavirus-outbreak/political-backlash-mounts-coronavirus-lock-down-north-italy

Coronavirus Infections Boom in Italy, Slow Down in China