HUNDREDS OF northern Vermont residents are campaigning against U.S. Air Force plans to base the new F-35 bomber at the Burlington, Vt., airport–and they’re getting fierce opposition for their activism from the primary backers of the plan, Sens. Bernie Sanders and Patrick Leahy and the rest of Vermont’s Democratic Party establishment.

The F-35 is designed for stealth, first-strike capability and its capacity to carry 19,000 pounds of materiel, including nuclear bombs. As an attack aircraft, the F-35 is promoted [1] as “unparalleled” and capable of reducing its human targets to “nothing but hair, teeth and eyeballs.”

The Vermont Air Guard currently flies a fleet of F-16s out of the Burlington airport, which the F-35s (when they eventually go into production) would replace. Based in the middle of residential neighborhoods, the extremely loud F-16s are widely unpopular. So when the Air Force released an Environmental Impact Statement (EIS) regarding the new basing plan that acknowledged that the F-35 is four times louder, local communities were outraged. 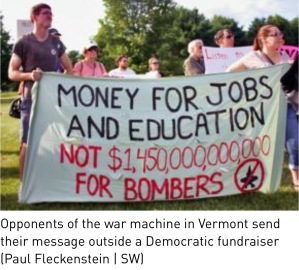 While the EIS failed to adequately address numerous environmental impacts, the deafening noise projection alone was alarming enough. The current F-16s are so loud that it’s necessary to pause conversation and sometimes even cover your ears. Janice Schwartz, a member of the Stop the F-35 Coalition [2], reported at a recent protest that there is a school across the street from her home. “When the kindergarten class comes in,” she explained, “they do F-16 orientation…because they hear these planes and they freak out. The F-35 is four times louder…That’s why they put military airports in deserts.”

Two hundred units of affordable housing near the airport have already been demolished because they were in the existing extreme noise zone. The EIS also notes that studies predict a substantial decrease in property values adjacent to the airport, which has been a flashpoint of homeowner opposition.

Research also shows the noise effect on local schools will be substantial. According to the EIS, peak noise levels from the F-35 would be 128 times louder than normal limits for classrooms. Classes are already interrupted daily at several schools by the F-16s, and studies show that this level of noise poses learning issues for children. “German researchers have discovered that people who are exposed to jet noise have a substantially increased risk of stroke, high blood pressure and heart disease,” according to Time magazine [3].

THESE ISSUES have brought hundreds of people to organizing meetings, rallies and public hearings. Two local school boards passed resolutions against the F-35 basing, and the South Burlington City Council has also condemned the plan. However, to date, Vermont’s senators and its Democratic congressman, Rep. Peter Welch, have continued to promote the basing and have yet to take seriously any of the community concerns. All members of the congressional delegation have refused to even meet with F-35 opponents.

As with other states, the amount of Pentagon spending in Vermont has steadily increased during the past decade and now totals upwards of $1 billion per year. Vermont’s largest newsweekly dubbed Sen. Leahy “Paddy Warbucks” for his success in bringing home the military pork.

At the one official public hearing on the F-35 held by the Air Force [4], the Democratic establishment and a whole contingent of Vermont’s 1 percent (especially in the construction and manufacturing sectors) were paraded out for the first hour to tout the great economic benefits of the F-35.

The dog-and-pony show also warned of dire consequences–all unsubstantiated–for jobs and the local economy if the bombers didn’t base in Vermont. This has been the basis for a fake grassroots, pro-F-35 petition campaign run out of regional gas stations that has collected thousands of signatures under heading “Save the Vermont Guard.”

While the F-35 will drain a projected $1.45 trillion from government coffers, spending on needed infrastructure, health care, green technologies and education would be far more effective at providing needed jobs and benefits to workers.

What’s more, Democratic Party support for the F-35 basing raises a more glaring contradiction. Vermont Democrats campaign on their “antiwar” credentials, but now they are cheerleading a first-strike weapon of mass destruction. Sen. Sanders even deflected questions about his support for the F-35 bomber during a Vermont Public Radio interview [5] by turning to glowing praise for the Vermont Guard’s contribution to the occupations of Iraq and Afghanistan, presumably including the use of Vermont Air Guard F-16s to bomb Iraq as part of the illegal occupation.

But this shouldn’t come as a shock. Sanders initially ran for Congress in 1990 while supporting the first Gulf War. Sanders has since aligned himself with several U.S. wars, including the 1990s blockade and bombing of Iraq that killed more than 1 million Iraqis, the war in Yugoslavia and the “war on terror.” His views on war and interventions closely mirror those of President Obama.

THIS SHOULDN’T play well with Democratic voters. Forty-one percent of respondents in a recent Gallop Poll think that military spending is too high. The New York Times reported that 69 percent of Americans oppose the occupation of Afghanistan, and in Vermont, these numbers are likely higher, especially among working-class and younger people.

Even an establishment journal like Foreign Policy has published an article about the F-35 entitled “The Jet That Ate the Pentagon.” [6] “The F-35 is a boondoggle,” writes Winslow Wheeler. “It’s time to throw it in the trash bin.” Nevertheless, support from Vermont’s liberal establishment continues.

Through the Stop the F-35 Coalition, hundreds of F-35 opponents have come together to build a movement that has in a matter of months put a significant dent in plans for the basing. The coalition has leafleted and petitioned among downtown crowds, organized through an online local network called Front Porch Forum, and held rallies and protests. More than 100 people came out to a honk-and-wave protest in the busiest intersection in Winooski where signs read “The F-35 bombs property values,” “Money for jobs and education, not $1.45 trillion for bombers,” and “Jobs yes, but not these jobs.”

When a similar-sized mobilization for a Burlington City Council meeting watched as Democrats and Republicans defeated a “no F-35” resolution put forward by progressives, the campaign set its sights on the leadership of Vermont’s Democratic Party, especially the two senators who have the power to halt the basing.

In July, protesters gathered at a Democratic Party fundraiser to send their message loud and clear–money for Democrats is money for their agenda, including F-35 basing. Retired Air Force pilot Roger Bourassa addressed the crowd about many reasons to oppose the stealth bomber. “This is an offensive weapon and the most expensive weapons system the Department of Defense has ever undertaken,” said Bourassa. “It feels like we’ve lost our moral compass.” Indeed, Vermont has a choice to make.

Proponents of the bomber regularly defend it as essential to maintaining U.S. empire–though they often call it something like defending our freedom. But the fact that the bomber has nothing to do with defending “us” at home, it’s obvious that sustaining the empire is the central concern. Obama and the Democratic Party differ more in rhetoric than substance compared to Bush and the pro-war administration they replaced.

At a basic level, the Stop the F-35 campaign is about what kind of future we expect for Vermont and elsewhere–one driven by military budgets, pork-barrel spending and wars at the expense of housing, health care and education, or one where we can successfully bring the pressure of thousands in Vermont and elsewhere so politicians have no choice but to represent our interests.
[1] http://www.stopthef35.com/f-35-stealth-bomber-not-defense-fighter
[2] http://stopthef35.com/
[3] https://www.time.com/time/specials/packages/article/0,28804,1929071_1929070_1947782,00.html
[4] http://vtdigger.org/2012/05/15/at-hearing-public-divided-over-bedding-f-35s-in-burlington/
[5] http://www.vpr.net/episode/54091/sen-sanders-on-gas-prices-citizens-united-gun-cont/
[6] http://www.foreignpolicy.com/articles/2012/04/26/the_jet_that_ate_the_pentagon
Creative Commons (by-nc-nd 3.0): https://socialistworker.org/2012/08/09/vermont-says-no-to-the-f35