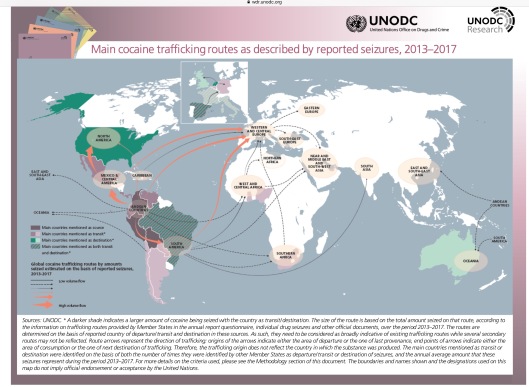 The following Government of Canada report is interesting not just for Jamaica, but brings to mind historic US and Canadian machine politics. This raises the question of how much of this sort of machine politics is still active, and the extent that it may account for the current political and social dysfunction of the United States, as well as many other countries. Are politicians forcing massive immigration from Latin America, the Caribbean, and India, upon the United States to better facilitate drug (and human) trafficking; money-laundering, etc.? “Family joining” facilitates family-based organized crime. Family-based organized crime is difficult to impossible for law enforcement to infiltrate. Crime families from other countries have and can still immigrate, as well.

“Jamaica’s Organized Crime Environment
Organized crime and politics have historically been related and mutually reinforcing in Jamaica. Interparty electoral violence has a long tradition in the country; in particular, the leaders of Jamaica’s two major political parties, the Jamaica Labour Party and the People’s National Party, have relied on gangs to clear neighbourhoods of opposition voters, with the aim of creating monolithic voting blocs capable of delivering electoral victories. 9 This created an enduring relationship between political power, patronage and organized crime. As one report noted, “elections turned into zero-sum games with one side scoring points through low-level jobs, paved roads, and improved housing, while the other side would risk government sanctioned retaliation, mass eviction, and deteriorating infrastructure” (Arias, 2013:221). Over the years, just as politicians have used gang structures to control electoral violence and marshal votes, they have delivered economic rents to gang leaders in the form of protection and access to government contracts, allowing gangs to deliver public goods to the communities they control.10

As one report put it, “in return for delivering votes, [gang leaders] can act as channels for political patronage, cementing their status as community leaders” (IHS, 2015: Art. 1, p. 2). These politically affiliated gangs rose to prominence by “exchanging directed political violence for public works contracts” in Jamaica’s garrison communities (Government of Jamaica, 2013:19).

Jamaica’s Ministry of National Safety describes a spectrum of criminal enterprises operating in the country, ranging from highly organized, transnational groups to local gangs defending small patches of turf and engaging in opportunistic crime (Government of Jamaica, 2013:19). The transnational groups are involved in weapons and narcotics trafficking, money laundering and large-scale fraud schemes. They may also have domestic real estate and business interests, and collude with corrupt government officials to divert state resources (Government of Jamaica, 2013:19). A 2010 Small Arms Survey report estimated that there were 12 organized crime groups in the country (Leslie, 2010). 11

The same report cited estimates of as many as 268 active gangs in Jamaica, with 20,000 members (Leslie, 2010). A 2008 survey indicated that 34,000 Jamaicans were involved in gangs, while “5 percent of the population had friends or relatives who were gang members” (IHS, 2015:Art. 2, p. 3). The most prominent of these groups are the Shower Posse and the Spanglers, both of which are thought to regularly engage in international drug trafficking (Arias, 2013:226). The Government of Jamaica has taken measures to counter corruption and break the connection between politics and organized crime. One report found that “while political patronage towards certain gangs persists, the number of garrison communities has declined and most gang-related violence is no longer primarily political” (UK Home Office, 2013:13). In mid-2010, a major anti-gang operation targeting the Shower Posse in Tivoli Gardens resulted in the extradition of the country’s premier drug and crime don, Christopher “Dudus” Coke to the U.S. Coke’s extradition and the disruption of the Shower Posse led to an initial decrease in violence through 2011 and 2012, although the murder rate rebounded in 2013 (IHS, 2015:Art. 2, p. 4).

From a Canadian perspective, the most relevant organized crime group in Jamaica is the Shower Posse, which leveraged diaspora connections in North America (in particular, New York and Toronto) to establish a transnational drug trafficking network. The nature of this network, which uses local brokers to conduct business on the ground, makes it particularly resistant to deportation as a law enforcement strategy. As one report noted, “these major criminal groups maintain some autonomy vis-à-vis their international criminal partners. Deportation of collaborators in foreign countries is less likely to disrupt activities in Jamaica since their networks are broad enough to cover such contingencies” (Arias, 2013:226).

Drug Trafficking Trends
Of particular concern for Canadian law enforcement officials is Jamaica’s return to prominence as a major transshipment point for cocaine originating in South America. Jamaica’s role in the hemispheric drug trade has fluctuated over time, mainly in response to law enforcement efforts in the region. Geographically, Jamaica is a prime candidate for the transshipment of cocaine from South America to markets in North America, with over 1,000 km of coastline and 100 unmonitored airstrips (Council on Hemispheric Affairs [COHA] 2007). However, the country’s relative importance as a transshipment point for cocaine reached its height in the 1970s and 1980s.12

Subsequently, concerted law enforcement efforts caused Caribbean trafficking routes to be replaced by ones using Panama and the so-called Northern Triangle countries of Central America (Guatemala, Honduras and El Salvador), the Gulf of Mexico and the Pacific corridor (Bagley, 2012:6). By 2010, as a United Nations Office on Drugs and Crime (UNODC) report noted, most cocaine intended for North America was smuggled over the U.S./Mexico land border (UNODC, 2010). The 2014 UNODC World Drug Report noted that in 96 percent of seizure cases made in the U.S., the drugs transited either Mexico or Central America (UNODC, 2014:35). In 2012, the Caribbean as a whole accounted for approximately five percent of cocaine reaching the U.S. market (Bargent, 2013), with Jamaica in particular accounting for approximately one percent (U.S. Senate, 2012:18). Even as cocaine shipments declined, Jamaica remained a prominent source country for marijuana, which was often traded for guns with partners in the U.S.13

The movement of drugs through Jamaica has in recent years tended to involve relatively small quantities of drugs being moved through airports as personal cargo.14

Figures from U.S. Customs cited in a recent report found that “more than 63 percent of all arrests at U.S. airports for cocaine possession involved passengers on flights from Jamaica” (COHA, 2007), supporting the contention that airline cargo is a major source of drugs originating in Jamaica.

However, just as law enforcement efforts in the 1980s greatly diminished the viability of Caribbean trafficking routes, the same “balloon effect” phenomenon is now pushing traffickers out of Central America. Recent research suggests that Jamaica’s prominence as a transshipment point for cocaine is on the rise, as increased attention and law enforcement in Central America causes traffickers to revisit Caribbean trafficking routes. As one report noted, Jamaica’s return as a transshipment point has resulted from “the displacement of trafficking routes as a result of the strengthening of drug trafficking countermeasures in Latin America” (International Narcotics Control Board, 2014:50). The report found that “Jamaican criminal groups are using the elaborate networks originally established to traffic cannabis, to traffic cocaine as well” (International Narcotics Control Board, 2014: 50). Cocaine seizures in Jamaica, which increased from 338 kg in 2012 to 1,230 kg in 2013, reinforce this analysis (International Narcotics Control Board, 2014: 51). William Brownfield, the U.S. State Department’s senior anti-drugs official, was quoted in one report as saying that 16 percent of cocaine entering the U.S. in 2013 transited the Caribbean, compared to 4 percent in 2011 (International Drug Policy Consortium, 2014).Brownfield reportedly told a group of Caribbean police commissioners in April 2014 that the drug trafficking situation was “likely to get worse before it gets better” (International Drug Policy Consortium, 2014). Jamaica’s return as a significant transshipment point for cocaine underscores the significance of the connection between Jamaican and Canadian organized crime groups“. Read the study/report here: https://www.publicsafety.gc.ca/cnt/rsrcs/pblctns/2016-r007