The FBI’s Rachel Rojas says there is no “credible threat to our community“, which presumably means Pensacola, from the context. Who thought there was still a threat to Pensacola? What about the rest of the country? The majority of Americans want to know if there is a credible threat to the country, not if there is a threat to Pensacola! Pensacola is a miniscule 52,590 people. If there had been an additional credible threat to Pensacola, wouldn’t the credible threats have attacked already and/or fled to other parts by now? She says that no international students are missing from the Naval Air Station (NAS) Pensacola, according to the Navy, but are any missing from elsewhere? She says that their Saudi commanding officer is restricting them to base! Shouldn’t the US restrict them to base? It’s unclear if her emphasis has meaning, or is simply an effort to enunciate clearly, surely from her Boston University communications training (probably to overcome her New York accent.) BU is where Martin Luther King studied homiletics (preaching): https://archive.li/KCKWT To be so precise, her English grammar is not, and is apparently from a base of Spanish (or Italian). Is her emphasis on Saudi’s “pledge” of cooperation intentional? We encourage you to listen to the original and judge for yourself (we have created a partial transcript is below). Video Link: https://youtu.be/FOZeoZm2ECI

Excerpts from FBI Jacksonville Division Rachel Rojas, (as delivered; English uncorrected): “We are looking very hard at uncovering his motive… There are a number of Saudi students who are close to the shooter and continue to cooperate in this investigation. Their Saudi commanding officer has restricted them to base and the Saudi government has pledged to fully cooperate with our investigation. I thank the Kingdom for their pledge of full and complete cooperation.

We are as we do in most active shooter investigations work with the presumption that this was an act of terrorism. This allows us to take advantage of investigative techniques that can help us more quickly identify and then eliminate any additional potential threats to the rest of our community.

As we have stated multiple times, our investigation has not led us to any information that indicates any credible threat to our community. As we speak, members of the FBI’s joint terrorism task force, and the FBI’s counterterrorism division are working tirelessly to discern if any possible ideology that may have been a factor in this attack. But, they are working alongside members of our criminal investigative team as well. So, we are all on the same page, no matter which direction our investigation ultimately takes.

So far the FBI has dedicated 80 special agents, and task force officers and there are nearly 100 professional staff from field offices across the country to this investigation. That is in addition to the many, many resources that has been provided by [other agencies]….

Our main goal, right now, is to confirm whether he acted alone or was he a part of a larger network. We currently assess: there was one gunman, who perpetuated this attack, and no arrests have been made in this case.

There have been many reports that the FBI is searching for or unable to find certain individuals. I can report that the FBI is working side by side with the US ?CIS? Navy and they have confirmed to us that they have 100% accountability on all international students from NAS Pensacola. This is a large investigation…

Once again our investigation has not led us to any information that indicates that there is any credible threat to our community…”
[It’s unclear what she said between US and Navy whether US Navy Criminal Investigative Service US Navy CIS or US “C” for chief, or US Sea Navy. See original for the list of “other agencies”]

She reminds everyone to report any relevant information – no matter how small: 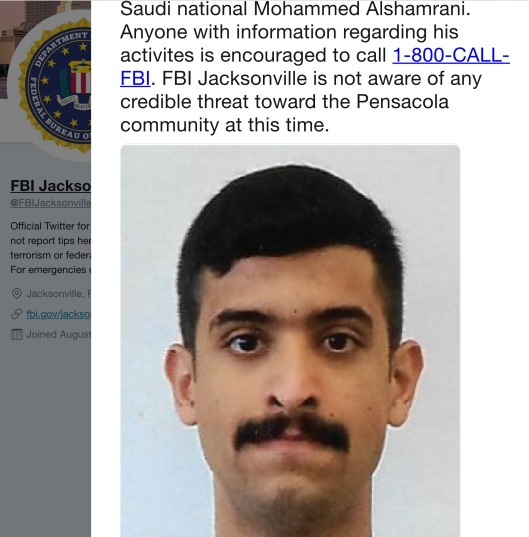