Trump invited to hearing:  “I remind you that participation by the President or his counsel has been described by the Committee in past inquiries as “not a right but a privilege or a courtesty which is being extended to the President’s counsel… The Committee looks forward to your participation in the impeachment inquiry as the Committee fulfills its constitutional duties. While we invited you to this hearing, we remind you that if you continue to refuse to make witnesses and documents available to the committees of jurisdiction, under H. Res. 660, “the chair shall have the discretion to impose appropriate remedies“. (Jerrold Nadler, US House Judiciary Chairman, November 26, 2019; See screen shot of entire letter further below.)

Chairman Nadler also sent a letter to President Trump today, reminding him of his and his counsel’s right to attend the hearing.

Chairman Nadler issued the following statement:
“As Chairman Schiff indicated yesterday, the impeachment inquiry is entering into a new phase.  Today, we noticed a hearing on the ‘Constitutional Grounds for Presidential Impeachment.’  That hearing will take place next Wednesday, December 4th at 10:00 am.  Our first task is to explore the framework put in place to respond to serious allegations of impeachable misconduct like those against President Trump.

“House Judiciary Dems @HouseJudiciary‪ @HouseJudiciary‬
will hold a hearing to examine the framework of high crimes and misdemeanors in order to address the serious allegations of impeachable misconduct, like those against Trump, and understand how the law applies to the evidence found in the ongoing investigations. 3:31 PM · Nov 26, 2019

This administration can no longer hide behind meritless claims of absolute immunity. Yesterday’s court ruling reaffirms Congress’s ability to issue lawful subpoenas and is a huge victory for the rule of law.https://t.co/x37ea1Lznc 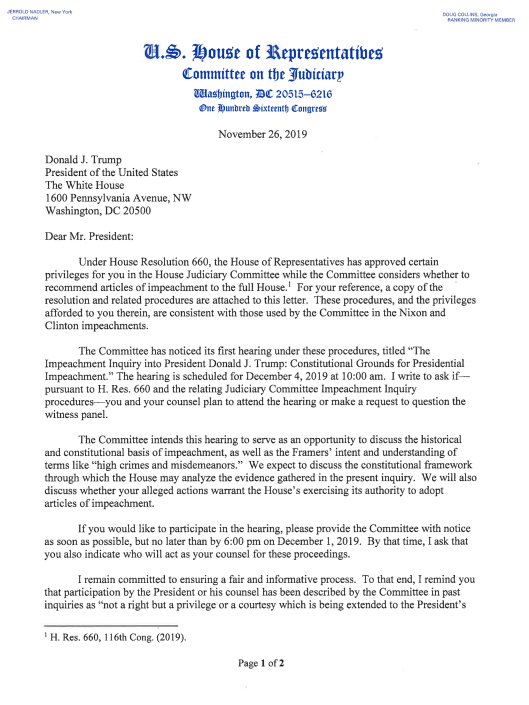