Man from India was working as an employee of a US military contractor in Afghanistan. (Doing what?) He is not a US citizen. He sexually assaulted an American woman on the military base: “working as an employee of a U.S. military contractor on Operating Base Fenty, Afghanistan, [Lokesh] Naik allegedly entered the room of a 24-year-old U.S. national and sexually assaulted her by force.” What company hired this man? They don’t tell us. It is possible that it is Security and Intelligence Services, as someone by that name works for it. However, there are over 100 people with the name Lokesh Naik on linked in alone, so we can’t make any assumptions. And, we do not know if SIS company works in Afghanistan or not: https://en.wikipedia.org/wiki/Security_and_Intelligence_Services_(India)
Note this wasn’t what we were looking for on the justice department web site, but there it was – the reality of the alleged “model minority“. Maybe he will learn that the US is not India – yet. “What’s Really Behind India’s Rape Crisis: India and China both have a surplus of males, but only one country has an out-of-control rape epidemic“, by Shaan Khan Updated Jul. 12, 2017, Mar. 25, 2016, The Daily Beast: https://archive.li/fQA1J Will Trump pardon him to make India’s Modi and Trump’s Republican Hindu coalition friends proud?

As can be seen below the Justice Dept news release, there are over 2000 third country nationals (TCN) working in Afghanistan, mostly as subcontractors-service contractors to prime US Department of Defense contractors.

“JUSTICE NEWS
Department of Justice
Office of Public Affairs
FOR IMMEDIATE RELEASE
Monday, November 18, 2019
Indian National Charged with Aggravated Sexual Abuse while Working as a U.S. Military Contractor in Afghanistan
An Indian national arrived in the U.S. yesterday after being ordered detained and removed to the U.S. for the alleged sexual assault of a U.S. national on a military base in Afghanistan.

Lokesh Naik, 35, of India, was charged by a federal grand jury in the District of Columbia on Nov. 6, 2019, with two counts of aggravated sexual abuse and one count of abusive sexual contact.  U.S. military authorities in Afghanistan arrested Naik on Nov. 8, 2019, and his initial appearance was held before U.S. Magistrate Judge Harvey via video teleconference, at which time Naik was ordered detained and removed to the United States pursuant to the Military Extraterritorial Jurisdiction Act (MEJA).  Naik arrived at Joint Base McGuire-Dix-Lakehurston by a military transport aircraft in the custody of Deputy U.S. Marshals.

According to the indictment, on Aug. 7, while working as an employee of a U.S. military contractor on Operating Base Fenty, Afghanistan, Naik allegedly entered the room of a 24-year-old U.S. national and sexually assaulted her by force.

Trial Attorney Jay Bauer of the Criminal Division’s Human Rights and Special Prosecutions Section and Assistant U.S. Attorney Andrea Hertzfeld of the District of Columbia are prosecuting the case.  The U.S. Army Criminal Investigation Command and the FBI’s Washington Field Office are investigating the case.  Invaluable assistance with the defendant’s transfer to civilian custody and removal to the United States was provided by the Department of Defense, United States Central Command, U.S. Forces – Afghanistan, and the U.S. Marshals Service.  The Criminal Division’s Office of International Affairs also provided valuable assistance.

The charges in the indictment are merely accusations, and the defendant is presumed innocent unless and until proven guilty.
Component(s):
Criminal Division
Criminal – Human Rights and Special Prosecution Section
USAO – District of Columbia
Press Release Number:
19-1266
Updated November 18, 2019” https://www.justice.gov/opa/pr/indian-national-charged-aggravated-sexual-abuse-while-working-us-military-contractor 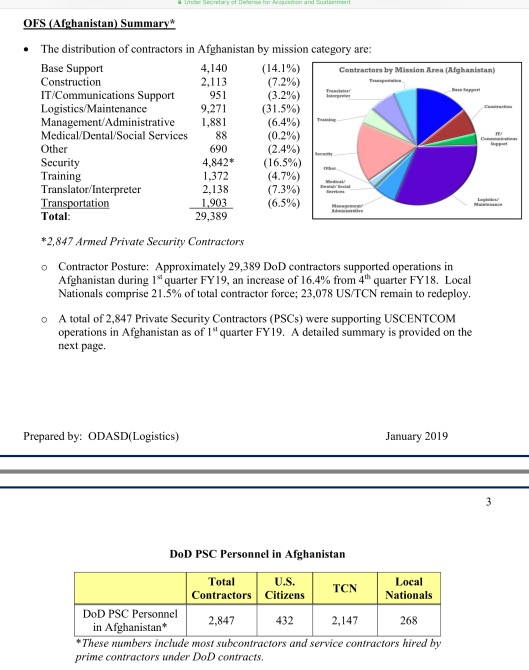 If they put the Asian-Indian workers in security then that might help India’s male overpopulation.

An important read because it explains the origins of the Americans who have died doing security in Iraq Afghanistan. Also, the difficulties of obtaining information/data:
https://www.militarytimes.com/news/your-navy/2019/03/14/who-are-the-private-contractors-in-iraq-and-afghanistan/

“So there are mutual interests that Iran and Afghanistan share; water rights, commerce. We welcome the recent economic treaty between Iran, Afghanistan and India the Chabahar port. We think this offers Afghanistan economic alternatives to going through Pakistan…” Excerpt from testimony: https://rs.nato.int/news-center/transcripts/senate-armed-services-committee-the-situation-in-afghanistan-full-transcript.aspx