Trump tweeted support of the wrong person on Friday. He thought he was going to Louisiana, instead of Tupelo, Mississippi (Elvis birthplace). Trump went to Kentucky on Monday, where the current governor Matt Bevin faces a tough re-election campaign against State AG Andy Beshear. Kentucky poverty jumped from 13.5% in 2017 up to 15.7% in 2018. Bevin appears to have made light of teachers working multiple jobs to survive in Kentucky. Poverty in Mississippi is 19.6%; Louisiana 19%, and Virginia 9.8%. The Louisiana candidate, supported by Trump, is apparently trying to undermine homestead exemption. 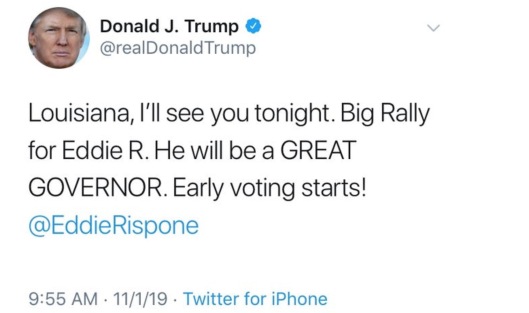 From VOA News:
“Trump, in 2020 Election Preview, Pushes Republican Candidates in Tuesday Voting
By Ken Bredemeier
November 4, 2019 04:46 PM
WASHINGTON – There are scattered key elections in the U.S. on Tuesday, with President Donald Trump campaigning for Republican candidates in hopes of shoring up his own political standing a year ahead of his re-election contest.

Trump, with polls showing widening disapproval ratings from voters nationally and facing an impeachment inquiry in Washington, heads Monday night to the mid-south state of Kentucky, where he won easily in the 2016 national election that sent him to the White House and remains popular.

Whether his Republican allies win there and elsewhere could signal how voters feel about him as he looks to the Nov. 3, 2020, national election against a Democratic challenger that won’t be picked for months.

He is headlining an election-eve rally for incumbent Republican Gov. Matt Bevin, a loyal supporter of the president who is facing a tough re-election campaign against his Democratic challenger, State Attorney General Andy Beshear, the son of a former Kentucky governor.

“Kentucky is having the best economic year ever under Matt’s leadership,” Trump said on Twitter ahead of his visit. In another tweet, Trump said, “Matt will never let you down, and we have to send a strong signal to Nancy Pelosi and the Radical Left Democrats. See you on Monday night, VOTE TUESDAY!!!”

Trump was referring to his nemesis in Washington, House Speaker Nancy Pelosi, the leader of the Democratic-controlled House of Representatives that has launched the impeachment inquiry against Trump after he pressed Ukraine to investigate one of his top 2020 Democratic rivals, former Vice President Joe Biden.

But Bevin has openly feuded with teachers and others in the state, putting his re-election in doubt in a state that has long voted for Republican candidates. Polls show his race against Beshear is a tossup.

In the run-up to Tuesday’s voting, Trump also has visited the southern states of Mississippi and Louisiana, two other states he won in 2016, to lend support to Republican gubernatorial candidates.

On Twitter, Trump has called for the Louisiana election of Eddie Rispone, a self-described “conservative outsider for governor” over incumbent Democratic Gov. John Bel Edwards, in a runoff that occurs Nov. 16.

Trump contended that Edwards “is always fighting” his Make America Great Again agenda. “Wants to raise your taxes and car insurance to the sky. Vote for Republican Eddie R!”

In a recent open contest for the governor’s seat, with both Republicans and Democrats on the ballot, Edwards won easily, but narrowly failed to reach a majority, necessitating the runoff late next week with Rispone, his closest challenger.

At a rally in Mississippi last week, Trump called on voters to elect Republican Lt. Gov. Tate Reeves, who is locked in a tight contest Tuesday with Democratic Attorney General Jim Hood, to replace the term-limited Republican Gov. Phil Bryant. Analysts in the state say it could be one of the closest elections in a generation.

There are four states that are holding state legislative contests on Tuesday, but only in the mid-Atlantic state of Virginia, which borders Washington, is there a possibility of a switch in political control.

Republicans now narrowly hold majorities in both the House of Delegates and the state Senate. But a handful of Democratic wins in closely contested contests throughout the state could give them control of both the legislature and the governor’s office, where Gov. Ralph Northam has two years remaining in his term.

“Virginia has the best Unemployment and Economic numbers in the history of the State,” Trump tweeted, apparently unaware that Democratic governors have run the state 14 of the last 18 years, even as Republicans have recently held majorities in the state legislature.

Trump claimed that if Democrats take control of the General Assembly, as the state legislature is called, “those numbers will go rapidly in the other direction.”

“I hope everyone in the Great State of Virginia will get out and VOTE on Tuesday in all of the local and state elections to send a signal” to Washington by voting for Republicans, Trump said.

Numerous cities throughout the U.S. are also holding elections Tuesday, electing mayors and other officials.

In Tucson, Arizona, in the southwestern part of the U.S., voters are deciding in a referendum whether to declare it a sanctuary city, like numerous other municipalities throughout the U.S., to protect immigrants when they have been arrested from being turned over to federal immigration authorities. Trump has often derided such localities as counter-productive to his tough anti-immigration policies” .https://www.voanews.com/usa/trump-2020-election-preview-pushes-republican-candidates-tuesday-voting

In order to show some of the responses to the video, the video shows several times, below.

Yesterday, I told a story about a teacher named Laura, who drives Uber to make ends meet. Matt Bevin's response was dismissive & showed he doesn't care how our people are falling behind. I'm ready to lift up Kentuckians like Laura and want you to hear directly from her. pic.twitter.com/szMLJnf7Hd

America better wake up. It’s teachers. It’s farmers. Veterans. Military. Coal miners. UPSers. Amazon warehouse. Retail. Anyone of us who has ever made an hourly wage are seen as second class servants. We should have made better choices. Invested. Welcome to the #hungergames

Once again, 46-1 is showing his blatant ignorance. He doesn't know where he's going or what he's doing. https://t.co/cIMWZCGh3a