Advice to backlogged migrants who need “relief” 💩: Eat dates, apple sauce, and/or prune juice, drink water, as you fly back to your home country. (Dalits awaiting should apply for US asylum).

US immigration policy does not reflect the will of the people. When people are told how many immigrants are coming, they want less: https://www.numbersusa.com/sites/default/files/public/Voters_Want_Less_Immigration1.pdf

The vast majority of immigrants from India to the USA are upper/dominant castes. If S386 or the RELIEF Act for immigrants passes, and they get “relief” from the constipated immigration backlog, who will clean up their sh*t 💩 without Dalits? One Dalit (untouchable) dies in cleaning the sewers in India every five days: “Indians Should Be Ashamed For Sending Dalits To Sewer“: https://youtu.be/lkDUvLLOYg8

“Caste is like racism except that we’re not differentiated by skin color…” https://www.pri.org/stories/2017-08-10/india-she-was-untouchable-new-york-city-she-became-author

Backlogged economic migrants don’t need RELIEF, they need to return home and get their country’s sh*t 💩 together. The Asian-Indian student who screwed up my tour in Ireland, said that she was going home to build her country. Praise God, I thought. But, why must we depend upon immigrants wanting to return to build up their own country?

The building in New Orleans, which just collapsed, is owned by an Asian-Indian migrant (Mohan Kailas), apparently brought to us via family joining. A missed tour is one thing, a collapsed building is far more serious. Furthermore, that building was based on exemptions to the city ordinance for height and should never have been allowed. However, the nearby Marriott and other high-rises are still standing tall. The exemptions sound remarkably like the exemptions demanded by Holtec – owned and operated by a migrant from India (Kris Singh) – for his crappy 💩 nuclear waste cans.

Why are we so helpless that we can’t say no to economic migrants? The United States turns their backs on refugees without any qualms, but for economic migrants, whose sole goal is to steal our jobs, there are arms wide open.

URGENT: AMERICANS CALL YOUR MEMBERS OF CONGRESS!
United States Capitol switchboard at (202) 224-3121
How to contact your officials: https://www.usa.gov/elected-officials
NO TO DURBIN’S “RELIEF” FOR IMMIGRANTS ACT;
NO TO S386 (aka INDIA FIRST ACT).
NO TO ANY BILL WHICH LIFTS PER COUNTRY GREEN CARD CAPS.
NO TO ANY BILL WHICH INCREASES GREEN CARDS.
Educate yourselves here: https://www.numbersusa.com

Why hotels and motels owned by Asian-Indians have proven so filthy, and not maintained, that we avoid travel within the USA, is slowly coming into focus. The upper and dominant castes apparently don’t want to dirty their hands. It’s against their religion. And, the hotel-motels serve as a device to bring in more family members. At some point, if they hire outsiders then the hotels or motels can be clean. The same has been seen in an Asian-Indian owned gas station in Italy. Someone literally sh*t 💩 on the toilet floor – rather than the toilet – and no one cleaned it up.

The goal of upper-dominant castes is apparently to clean up the money and not to clean, we are learning. On the other hand, if a toilet is clean and shiny in Europe and the lady from India smiling, then it is likely a Dalit. Cleaning a proper Swiss toilet with gloves, etc., is surely a cut above cleaning dry toilets in India.

Little known fact – My nordic ancestors had toilets flushed with water in 3000 BC at Scara Brae (Scotland): “There is evidence of stone huts equipped with drains built into the village walls, dating back to around 3,000 B.C… The sewer system was basic – waste was flushed into a drain with pots of water – but the basic principle remains to this day.” https://www.bbc.com/news/uk-scotland-22214728

Asian-Indians upper/dominant castes apparently love IT and MBAs because they can clean up the $$$, without dirtying their hands. How they cope being MDs, remains an abiding mystery.

Who will clean their sh*t 💩 if they are given S386 or Durbin’s RELIEF Act? Probably docile indigenous Mayan ladies from Meso-America, or no one at all.

Dalit kids forced to clean toilets at school, if not would be beaten, they say: https://youtu.be/59xUXHN6YTo

Asian-Indians have the highest incomes in the USA, followed by South African Americans. Both come from exploitive caste-based countries. Asian-Indians in the USA are almost entirely upper/dominant castes, and South Africans mostly white, but also Asian-Indians, including upper castes: https://en.wikipedia.org/wiki/List_of_ethnic_groups_in_the_United_States_by_household_income In a 2017 article, an Asian-Indian doctor admits that Asian Indians are looked up to, and that discrimination falls upon black Americans, rather than them. See: https://miningawareness.wordpress.com/2019/09/22/caste-kinship-the-realisation-of-american-dream-high-skilled-telugu-india-migrants-in-the-usa The article also explains that they have a plan and it is rooted in family joining. They think that moving to the USA is their right.

THIS IS HOW THE UPPER-DOMINANT CASTES TREAT INDIA’S MINORITIES:
“‘This Is It. I’m Going To Die’: India’s Minorities Are Targeted In Lynchings”
https://www.npr.org/2019/08/21/751541321/this-is-it-im-going-to-die-indias-minorities-are-targeted-in-lynchings

Apparently because of their caste system, people from India are often more arrogant about taking American jobs. Don’t be fooled by fake humility, which apparently masks arrogance until they don’t get their way. Don’t be fooled, either: other ethnic groups work together to have their friends-relatives take over entire university departments, too (e.g. Chinese “nationalists”).

Asian-Indian households have the highest median income of all ethnic groups at $114,261; Median earnings of $148,019. https://factfinder.census.gov/faces/tableservices/jsf/pages/productview.xhtml?src=bkmk

India has affirmative action for those persecuted by the upper and dominant castes. It started in the 1950s, which is around the time the first wave of upper caste migrants from India started arriving. While that may have been the push factor, some time along the way the US created a pull factor, by classifying them as “minorities”. https://en.wikipedia.org/wiki/Reservation_in_India Being classified as “minority” has allowed them to replace African Americans and women, within academia, and elsewhere. IT work, MBAs, and academia allow them to keep their hands clean. Once they get their green cards and citizenship, they are eligible for small business help and minority contract set asides. It is apparently this set of policies which nuclear waste kingpin, India’s Krishna Pal Singh (Holtec), leveraged into a near monopoly on high level nuclear waste, despite the apparent crappiness 💩 of his product.

“In India, she was ‘untouchable.’ In New York City, she became an author.” PRI’s The World https://www.pri.org/stories/2017-08-10/india-she-was-untouchable-new-york-city-she-became-author (She also did a degree in physics from India’s top university, but is working as a subway driver. So much for the US using imported talent effectively.)

Sorry this isn’t a “nice” post. My ancestors have been in the USA for hundreds of years; we beat the British; we built this country (e.g. wheels, saddles, railroads, automobiles), and I am simply tired of this BS 💩 from wanna be migrants with a home and country of their own, and their lackey politicians – most of the supposedly US Congress – who don’t give a rats ass about the American people, who are already here and who are already citizens.

Aspiring immigrants should be required to come by sailboat, again. And, if there is no wind, then India’s elites can eat rats, like some Dalits are forced to do in India, and like some earlier migrants to the USA were forced to do, when there was no wind left, and no food left.

This BS must stop and US citizens must focus on becoming Americans again, or there will be a Civil War, which is even less Civil than the last one. Sometimes the Northern and Southern soldiers drank coffee together on the front in Tennessee where brother fought against brother, during the US Civil War. But, with the new segregationist attitude, which we believe is being imposed by ideologues from India, the future of the USA looks bleak. The only person that I have ever met, who openly preached segregation of races and gender, was a Tamil (India). Furthermore, the Gupta family, who migrated to South Africa to make their fortune, used a PR firm, to help stir up racial animosity, as a cover for their theft of public funds.

OVER ONE MILLION IMMIGRANTS BECOMING US CITIZENS PER YEAR. GOOD IMMIGRANTS-BAD IMMIGRANTS IT’S TOO MANY IMMIGRANTS AND UNPRECEDENTED AND BOTH ENVIRONMENTALLY AND SOCIALLY UNSUSTAINABLE. 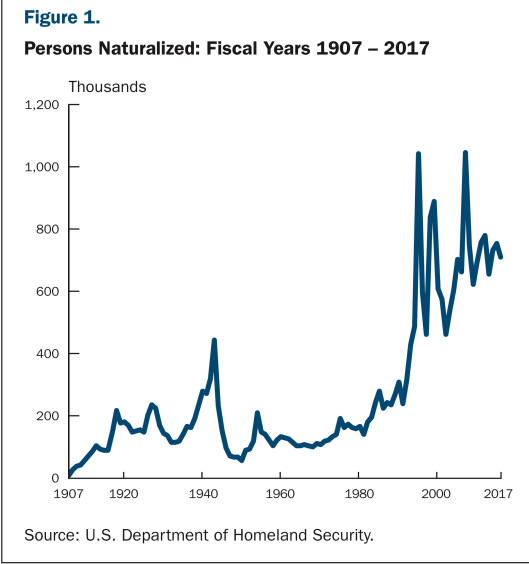