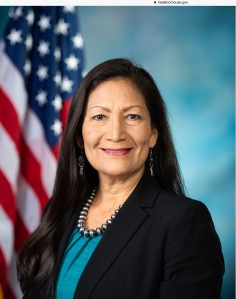 “Indigenous Peoples’ Day is about acknowledging indigenous peoples’ complex history in this country and celebrating the culture, heritage, and strength of native communities everywhere. Celebrating Columbus Day continues a dangerous narrative that erases Native American voices and minimizes the federal government’s attempt at genocide and forced assimilation,” said Congresswoman Deb Haaland, Co-Chair of the Congressional Native American Caucus. “Leading this effort with Rep. Torres is a huge step toward creating spaces and starting conversations about our country’s real history, and I thank my friend for her leadership.”

The resolution comes after the New Mexico legislature passed and Governor Michelle Lujan Grisham signed a bill to designate Indigenous Peoples’ Day in lieu of Columbus Day during the 2019 legislative session and it will be celebrated officially for the first time Monday, October 14th.

“For many indigenous people, the celebration of Columbus Day is a state-sponsored celebration of the history of violence and acts of brutality inflicted upon their communities,” said Congresswoman Norma Torres. “Too often we have failed as a country to acknowledge that history and to celebrate and recognize our tribal nations and indigenous peoples and their roots, traditions, and cultural contributions to our country. Through this resolution, we take one step towards correcting that failure; it moves beyond an outdated practice that perpetuates inaccurate teachings, devalues the history of indigenous peoples, and honors genocide. I am proud to introduce this resolution to acknowledge the true history of this continent.”

“The history of our First Peoples is essential to the story of America. By the same token, the Indigenous communities in Alaska are a central part of our state’s rich history and culture,” said Congressman Don Young. “It was a proud day for our state when Alaska first officially recognized Indigenous Peoples’ Day, and I am pleased to join this resolution to honor our nation’s Indigenous heritage, history, and traditions. As Vice Chairman of the House Native American Caucus, I will keep working with my friends on both sides of the aisle to help create strong and prosperous Native communities.”

“I’m honored to join Rep. Torres, tribal leaders across the nation, and the state of Minnesota in celebrating Indigenous Peoples’ Day,” said Congresswoman Betty McCollum. “This resolution recognizes the historical trauma that Native tribes and communities have survived, and the immeasurable contributions that the First Americans have made to our country, including Minnesota’s eleven Ojibwe and Dakota nations.”
https://haaland.house.gov/media/press-releases/haaland-cosponsors-national-resolution-recognizing-indigenous-peoples-day

Speaker Nancy Pelosi: “America is a land discovered by an Italian, named for an Italian, and built by millions of Italian Americans.  The shared ties of history and culture only serve to strengthen the U.S.–Italy alliance in this new century“. Read the rest and commentary here: https://miningawareness.wordpress.com/2019/07/19/in-a-speech-in-italy-pelosi-visualizes-the-united-states-as-an-italian-colony-and-appears-to-think-that-italians-built-the-united-states/