80 years ago, on September 17, 1939, the Soviet Union (Russia) invaded Poland under a pact that it had made with Nazi Germany to divide Poland between themselves.

Remember that Nazi Germany and the Soviet Union (Russia) signed the Molotov–Ribbentrop Pact, the Treaty of Non-aggression between Germany and the USSR, on 23 August 1939 and they jointly invaded Poland. The agreement was in place until Hitler launched an attack on the USSR in Eastern Poland on 22 June 1941 (Operation Barbarossa): https://en.wikipedia.org/wiki/Molotov–Ribbentrop_Pact Both ethnic Poles and Jewish Poles suffered greatly at the hands of the Nazis, who even wiped Poland from the map, with the help of Russia (USSR). 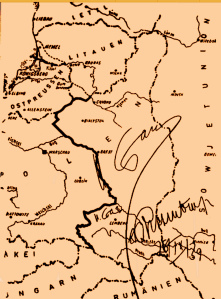 “Prior to 1918, Poland had been partitioned among its neighbours and wiped off the map of Europe for more than 120 years.” http://www.thenews.pl/1/9/Artykul/334660,Poland-celebrates-Independence-Day

Richard Spencer, a US Neo-Nazi (or whatever he or you want to call him) with ideological ties to Putin’s Russia and to Trump, was apparently not allowed into Poland to participate in Poland’s National-Independence Day, though one reads that he…