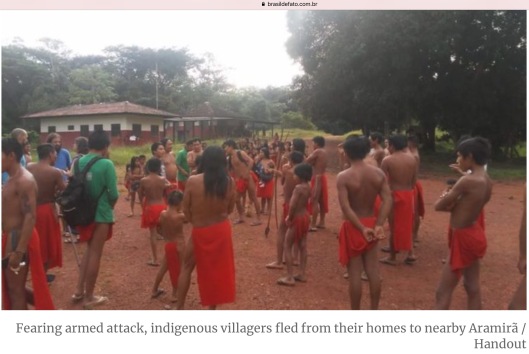 A group of armed men invaded an indigenous reserve in the Brazilian Amazon on Saturday, only days after a local indigenous leader was found dead nearby with stab wounds.

The Waiãpi indigenous reserve, which was invaded by heavily armed men, is located in the northern state of Amapá, in the city of Pedra Branca do Amapari. The body of Emyra Wãiapi, a community leader, was found earlier that week, on Wednesday.

The police and the country’s indigenous rights agency (FUNAI) arrived in the area on Sunday to investigate the case.

Senator Randolfe Rodrigues was called by a local councilman, Jawaruwa Waiãpi, who sent him audio messages asking for immediate help. “A local leader contacted me to report an invasion by gold miners and the murder of an indigenous leader,” the senator told news website Congresso em Foco [1].

Fearing retaliation, the indigenous people fled to the nearby village of Aramirã, to where children and women were taken.

However, they pledged to take their village back by themselves if authorities fail to take action to remove the attackers from the community. “There is an enormous potential for conflict,” senator Rodrigues said.

Another senator, João Capiberibe, said the attackers are probably not from Amapá state. “It is unclear whether they are garimpeiros [gold miners]. They are armed, they even have machine guns. And they possibly came from the border with Pará state.”

Senator Capiberibe spoke on Saturday night with indigenous leader Viceni Waiãpi, who told him about the murder of Emyra Wãiapi and said that they had reported the crime to authorities, but were discredited.

The two representatives warned that hatred and intolerance have been escalating in the area after the election of the far-right president Jair Bolsonaro [2]. “The blood that has been shed is the federal government’s fault, because it’s the result of the neglect of authorities,” Randolfe Rodrigues said. “Those who live off crime are feeling safe enough to invade indigenous lands.”

Illegal gold mining has been on the rise in the Brazilian Amazon since January, when Bolsonaro took office.

Deforestation has also increased dramatically, according to recent satellite data disclosed by the government’s National Space Research Institute (INPE). The president, however, has advocated for expanding mining activities in indigenous land and questioned the official data, claiming the agency “lied.”

Indigenous and environmental activists argue that the Bolsonaro administration is the one to blame for the increase of illegal activities in areas of Pará and Roraima state, as control and oversight rules have been rolled back since the far-right government has taken office.

The Inter-American Commission on Human Rights (IACHR) tweeted [3] expressing “concern over reports of what seems to be an invasion of the Wajãpi people’s land by armed attackers.” The agency also called authorities to conduct “due diligence to protect and prevent potential human rights violations” in Brazil.

The Coordination of Indigenous Organizations of the Brazilian Amazon (COIAB) released a statement in solidarity with the Waiãpi people, expressing outrage at the violent episodes that “have been escalating, especially encouraged by the hardline, irresponsible, authoritarian, discriminatory, arrogant, disrespectful attitude of the current government, especially of Mr. president Jair Bolsonaro, who has been unleashing attacks against the rights of the indigenous peoples of this country, especially land rights that they already have as enshrined in the country’s 1988 Constitution, and which this government has been constantly trying to roll back.”
*With reports by Congresso em Foco
Edition: Luiz Felipe Albuquerque and Daniela Stefano | Translated by Aline Scátola”
[1] https://congressoemfoco.uol.com.br/direitos-humanos/policia-federal-abre-inquerito-para-apurar-morte-de-cacique-no-amapa/
[2] https://www.brasildefato.com.br/2019/01/01/bolsonaro-inaugurated-today-as-president-of-brazil/
[3] https://twitter.com/CIDH/status/1155274849436274688
CC-BY-ND-4.0: https://www.brasildefato.com.br/2019/07/29/armed-group-invades-indigenous-village-in-the-amazon-after-its-leader-is-found-dead/
https://creativecommons.org/licenses/by-nd/4.0/deed.pt_BR