For some unknown reason, the US is allowing two companies, which are becoming increasingly infamous for corruption, SNC-Lavalin and Holtec, dismantle around half a dozen of its closed nuclear reactors. They are going to do it immediately after closure, which is less safe. Clearly, no sane person would trust Holtec or SNC-Lavalin with this endeavor. At the very least, nuclear power station dismantlement should be postponed until more trustworthy companies can be found to take charge.

Evans et al. of the Pacific Northwest Laboratory for the US NRC on Nuclear Decommissioning:
“Several basic approaches have been considered. The first approach involves immediate dismantlement over a 4-year period. An alternative to the first approach is some type of safe storage with a deferred dismantlement. The deferrment would typically be of the order of 30 to 50 years. The principal purpose of the deferral period is to allow decay of residual radioactivity to more manageable levels. The first option may, in fact, be more cost effective, while the second offers reduced risk of exposure to both the decommissioning workers and to the public… The remaining option to be considered is permanent in-place entombment…” “Long-Lived Activation Products in Reactor Materials“, Evans et al. Pacific Northwest Laboratory for the US NRC

This was apparently before most folks’ brains fell out or went AWOL.

See half-life chart below screen shots. As an example, a half life of 5 years, means that it will be radioactive for over 70 years (5 x 14). Some of the activation products, like Cobalt, act as mimics in the body. See: https://miningawareness.wordpress.com/2015/02/26/plutonium-trojan-horse-in-the-body (More than plutonium is dicussed). 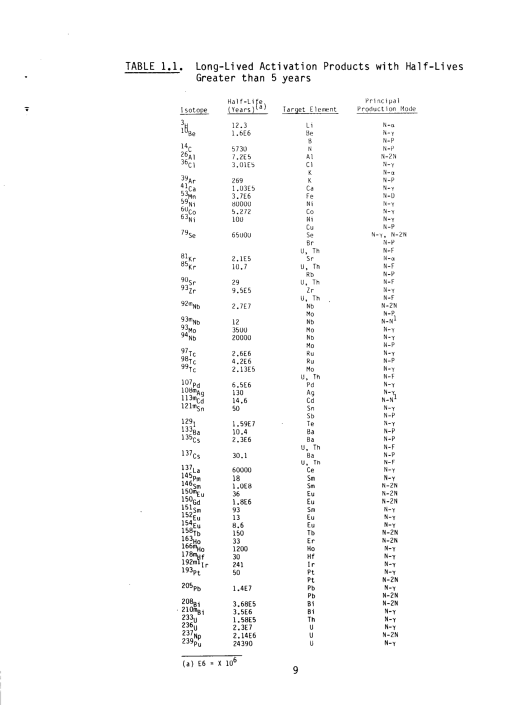