On Saturday morning, Trump called US Congressman Cummings’ District of Baltimore “a disgusting, rat and rodent infested mess.” He should know, considering that, reportedly, Baltimore “tenants who live in properties owned and managed by Kushner Companies entities have experienced “poor upkeep,” including appliance failures, mold, mildew, and rodent infestations.” Kushner Companies are receiving federal tax monies, under Section 8, and the properties are rodent infested! Someone needs to tell Trump that rats are rodents, unless he is referring to his son-in-law as the rat, and the mice and rats as rodents. Kushner, the apparent rat, may need to buy a lot of cats, or he should lose his taxpayer Section 8 subsidies: “HUD regulations specify that each ‘dwelling unit and its equipment must be in sanitary condition’ and ‘must be free of vermin and rodent infestation.’”

“On July 15, 1949, President Harry S. Truman signed into law the Housing Act of 1949, saying:  “This far-reaching measure is of great significance to the welfare of the American people. It opens up the prospect of decent homes in wholesome surroundings for low-income families now living in the squalor of the slums. It equips the Federal Government, for the first time, with effective means for aiding cities in the vital task of clearing slums and rebuilding blighted areas. It authorizes a comprehensive program of housing research aimed at reducing housing costs and raising housing standards. It initiates a program to help farmers obtain better homes.”https://www.govinfo.gov/features/ppp-70years

Apparently documents are still being withheld from the US Congress on this and many other topics involving Kushner: https://oversight.house.gov/news/press-releases/democrats-seek-votes-on-13-more-subpoena-motions-at-thursday-s-oversight

From the US House Oversight Committee (2017):
“Kushner Companies Engaging in Abusive Rental Practices
Maryland Congress Members Investigate.
House Oversight Dems
Rep. Elijah E. Cummings, Ranking Member of the House Committee on Oversight and Government Reform, along with U.S. Senators Ben Cardin and Chris Van Hollen and Reps. Dutch Ruppersberger, John Sarbanes and Anthony G. Brown, sent a letter to Kushner Companies LLC requesting documents relating to multiple reports that the company and its subsidiaries may be violating the requirements of a federally funded housing program operated by the Department of Housing and Urban Development (HUD).

“If these reports are accurate, they raise very serious and troubling concerns about whether Kushner Companies and its subsidiaries are complying with HUD’s housing quality standards to ensure the safety and health of their own tenants,” the Members wrote.

A new report [1] this week in the Baltimore Sun found that Kushner Companies is “the most aggressive in Maryland in using a controversial debt-collection tactic: getting judges to order the arrest of people who owe his company money” and that it has sought the civil arrest of 105 former tenants.

In addition, the New York Times and ProPublica recently documented [2] how tenants who live in properties owned and managed by Kushner Companies entities have experienced “poor upkeep,” including appliance failures, mold, mildew, and rodent infestations. They also detailed how tenants who “lack checking accounts” are not allowed to pay with money orders, but instead must use a card linked to their account that requires residents to pay a $3.50 transaction fee.

Kushner Companies, through its subsidiaries, owns several multi-family rental properties in Maryland in which tenants use HUD Housing Choice vouchers. According to HUD, the goal of the Housing Choice program is to provide “decent, safe, and sanitary” housing to very low-income families, the elderly, and people with disabilities.

“Property owners that accept Housing Choice vouchers are required to ensure that their dwelling units meet federal housing quality standards,” the Members wrote. “HUD regulations specify that each ‘dwelling unit and its equipment must be in sanitary condition’ and ‘must be free of vermin and rodent infestation.’ ”

The Members asked Kushner Companies to produce, by September 8, 2017, a wide range of documents and information related to properties owned or managed by the company and its subsidiaries.
[1] http://www.baltimoresun.com/news/maryland/investigations/bs-md-kushner-arrests-20170812-story.html
[2] http://www.nytimes.com/2017/05/23/magazine/jared-kushners-other-real-estate-empire.html&#8221;
View at Medium.com
https://oversight.house.gov/news/press-releases/maryland-congress-members-investigate-reports-of-kushner-companies-engaging-in 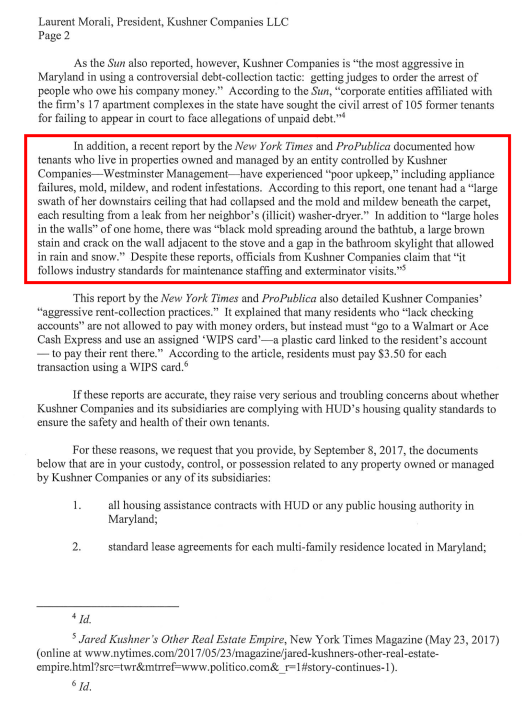 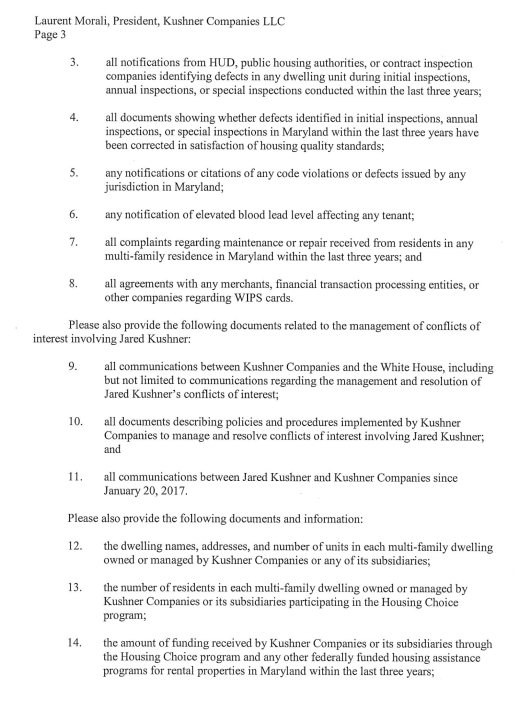 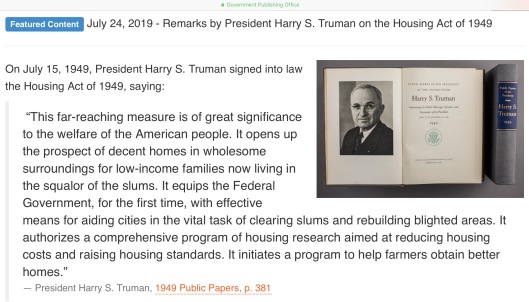