Contact and tweet your Senators, Subcommittee Chairs and members, and any other Senators that you can to Oppose Senate Bill 386 and the even worse S2091. Ask for a fair hearing and debate and not a sneak-through like happened with the House version: https://www.senate.gov/senators/How_to_correspond_senators.htm
https://www.congress.gov/bill/116th-congress/senate-bill/386/cosponsors
Immigration Subcommittee on the Judiciary: https://www.judiciary.senate.gov/about/subcommittees/subcommittee-on-border-security-and-immigration 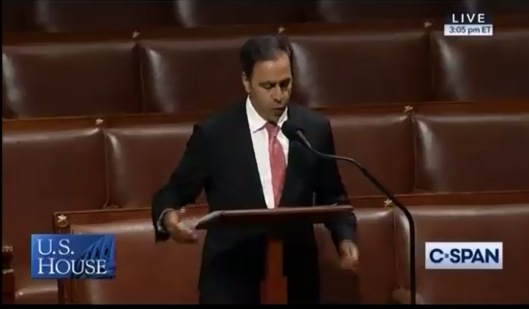 Congressman Raja Krishnamoorthi – one of at least two members of Congress born in India (New Delhi born Tamil) – speaks on lifting the country caps, effectively opening the floodgates to over 17% of humanity to live permanently in the United States by lifting green card country caps, combined with extended family joining (aka chain immigration). His House colleague, Pramila Jayapal, worked in the United States on an H1B visa. This fact, alone, demonstrates how quickly the choices of today can become the policy of tomorrow.

Oppose Senate Bill 386. The Senate Bill 386 will stop the per country cap on Green Cards. While the title of this blog post appears extreme, the demographics are proof of its veracity. India has 17% of the world population, they have the biggest Green Card backlog, and add (extended) Family joining, and the future of the United States is to be a colony of India. They are also given “minority” status and special contract set asides, which were intended for African Americans. With a medium household income of $100,000, they don’t need this help.

The Senate Bill 386 will stop the country cap which acts to slow conversion of H1B visas to Green Cards for overpopulated countries. Some have pointed out that by favoring slightly skilled IT workers from India who are “first in line” for a green card, this bill would lock out needed skilled immigrants from other countries. Since green cards quickly convert to US Citizenship, people need to ask if they want the one million new citizens per year to be based on “first come, first served”, and to be from the most populated parts of the world, such that extended family joining becomes endless. This vote will very quickly determine the future of the country.

H1B visas are not for highly skilled immmigrants. There is another visa for special talent. H1B simply takes jobs from educated Americans, and not just in IT. University professorships, and now even public school teachers, and any field that you can imagine are taken over by H1Bs. H1B easily converts to Green Cards minus the country cap. It’s a dual intent immigration status. Apparently EB visas are also a major menace for American academics and researchers (i.e. job thieves). It’s not easy to know what visa the person who stole your job is on. Remember that person has a country apart from the United States. Some Americans do not, though an increasing number of Americans do.

Those stealing your job aren’t necessarily more qualified, either. But, unless you are a very talented snoop, and not above reading files left on desks, or files open on computer, you may never know the truth.

This sell out of the United States was bipartisan. We encourage you to oppose the Senate bill, so it doesn’t become law, even if your Senator is listed as a sponsor. They can surely still change their vote. If you love India, try to move there. India is a country. India has a country. They are very nationalist so may not want you, though. In India you would have the opportunity to meet the whole spectrum of people, and not just those coming to the United States apparently to get affirmative action and minority contract set asides. The lower castes in India get affirmative action (called reservation). The upper classes in India get affirmative action in the United States. This is a “minority” which has a median household income of approximately $100,000 per year – the highest of all groups – much higher than whites; twice as much as hispanics, and over twice the median income of blacks. Check who the office manager is for your Senator and call an office branch not operated by someone with roots in India, or your objection may not reach your Senator.

We also call on all immigrants from India who love and identify with the United States, rather than India, to speak up and speak out against this, so that we know that you are there.

Is it a coincidence that Ocasio-Cortez’s spokesperson, Chakrabarti, whose parents are from India, was spewing out incendiary tweets accusing opponents of racism, in the runup to the vote? “Justice Dem” Ocasio-Cortez spokesman Chakrabarti: https://archive.li/uTw8S This is apparently why they are always prattling on about racism against “persons of color”. They are creating a false narrative to lump themselves with disadvantaged groups to make a fake majority, until they are a real majority. Were these tweets meant to distract from this important vote? How many would have called Congress before the House vote, if they knew? How many of the Congressional votes were based on ignorance? How many were racists who prefer Asian-Indian “persons of color” to African Americans?

The chart, below, shows numbers becoming US citizens. It shows that what the so-called Department of Homeland Security calls a flow is a flood without precedent historically; it is environmentally unsustainable and unfair to Americans. Over 1 million people per year is the equivalent of one large city per year. There is no equivalent chart for green cards, but citizenship is generally the next step. The green card statistics are here: https://miningawareness.wordpress.com/2017/04/19/trump-wants-study-of-how-to-give-best-jobs-to-immigrants-using-h1b-o-visas-exist-for-the-talented-h1b-is-an-unneeded-backdoor-to-green-cards-citizenship-and-to-lower-american-wages/ 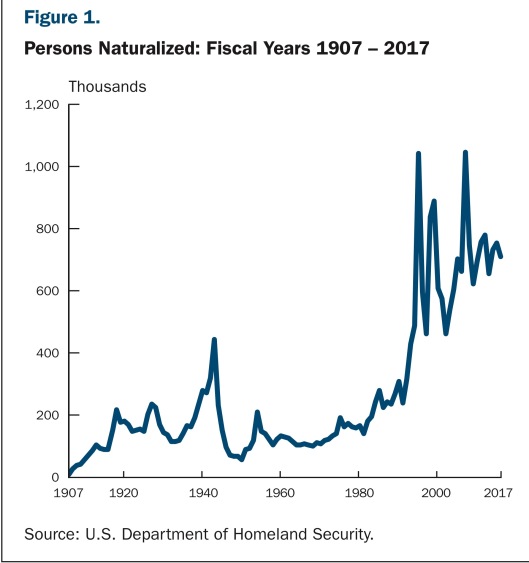 “5 Disturbing Highlights From A Rally For Hindu Supporters Of Trump”
https://www.huffpost.com/entry/5-disturbing-highlights-from-a-rally-for-hindu-supporters-of-trump_n_58051126e4b0162c043d64db

This new bill is fair for everyone except for Americans. If somebody wants to clear the gc backlog, just simply change the #H1B system. Cap it or kill the dual intention. No need to increase the number of green cards. Another disaster for hard working Americans. https://t.co/JirEzsSxSP

“Restrictionists Have Interesting Allies on HR 1044 – such as Ilhan Omar” By David North on July 11, 2019 https://cis.org/North/Restrictionists-Have-Interesting-Allies-HR-1044-such-Ilhan-Omar

Why there is a Backlog?
1- Because of #H1BAbuse and because there isn't a country cap on it. 65% of H-1B visas are given to a specific country.

URGENT: #NOS386. Call your Senator on Monday and tell them not to vote or co-sponsor S386…..DO IT ON MONDAY pic.twitter.com/CLMhn7MnNv

THE 65 WHO VOTED AGAINST THIS BILL IN THE HOUSE.

Asian-Indian households have the highest median income at $100,000: https://www.pewresearch.org/fact-tank/2017/09/08/key-facts-about-asian-americans