CEO of Energy Transfer Partners, Kelcy Warren, gave over $100,000 to Trump’s campaign. Energy Transfer Partners, of Dakota Access Pipeline notoriety, is majority owner (60%), as well as operator, of the recently completed Bayou Bridge II Pipeline from Lake Charles to St. James Parish, Louisiana, which passes through the Atchafalaya basin. Their partner is Phillips 66 (40%): http://web.archive.org/web/20190321001745/https://www.energytransfer.com/ops_bayou_bridge.aspx https://archive.li/hLBsj It connects to Bayou Bridge I pipeline, which runs from Nederland, Texas to Lake Charles, Louisiana. Trump was invested in both Energy Transfer Partners and Phillips 66, though he appears to have divested both – at least direct investments. Phillips 66 was still listed on his 2018 financial report (for 2017). Trump’s original (2016) invested in Energy Transfer was listed as $1500-$50,000 and Phillips 66 as $101,000 to $250,000.

Is this the “private property” that the Army Corps says that it’s concerned about, when discussing their failure to open the Morganza Spillway, while private and public property along the Mississippi is allowed to flood, and shipping, farmland, and industry to be (currently) impacted, and over a million lives put at risk, if the levees fail? https://miningawareness.wordpress.com/2019/06/08/operation-of-the-morganza-floodway-again-postponed-with-apparently-serious-repercussions-down-river/ 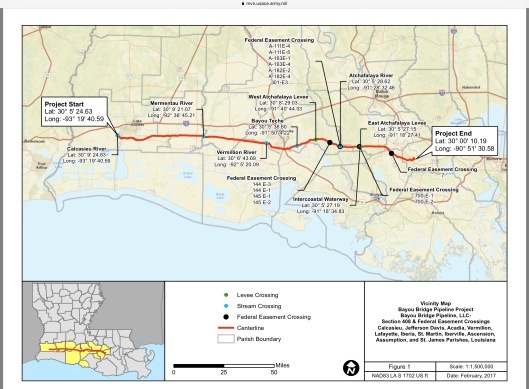 “Severe flooding, river scour, and river channel migration are the types of unusual operating conditions that can adversely affect the safe operation of a pipeline and require corrective action under the Federal pipeline safety regulations…” https://www.federalregister.gov/documents/2019/04/11/2019-07132/pipeline-safety-potential-for-damage-to-pipeline-facilities-caused-by-flooding-river-scour-and-river

Richard Kaiser was appointed by Trump to be head of the Mississippi River Commission. He is a rare qualified Trump appointee, but an appointee, nonetheless. He is apparently the guy who has the final say about if the Morganza opens or not.

“As crude oil production in the Permian Basin of western Texas and eastern New Mexico has increased, pipeline infrastructure has also increased to deliver this crude oil to…the U.S. Gulf Coast… Other pipeline project developments recently completed in the Gulf Coast will allow Permian crude oil to be sent to refining centers in Corpus Christi and Houston in Texas, St. James in Louisiana, and points in between“. http://web.archive.org/web/20190209014856/https://www.eia.gov/todayinenergy/detail.php?id=31132 One St. James connection is the Capline. There are also railroads, as well as the river, in the area.

Excerpted from corporate information sheet on Bayou Bridge pipeline makes the following statements, but doesn’t clarify the height in comparison to opening the Atchafalaya, or anything else, for that matter:
“• Construction of the major above-ground facilities are wholly in
uplands.
• All mainline valves located in wetland areas are on piers to
avoid filling waters of the wetlands.” https://archive.li/SV5tl

Excerpt from:
“UNITED STATES
SECURITIES AND EXCHANGE COMMISSION
Washington, D.C. 20549 Form 10-K
(Mark One)
x      ANNUAL REPORT PURSUANT TO SECTION 13 OR 15(d) OF THE SECURITIES EXCHANGE ACT OF 1934
For the fiscal year ended December 31, 2015
or o TRANSITION REPORT PURSUANT TO SECTION 13 OR 15(d) OF THE SECURITIES EXCHANGE ACT OF 1934
Commission file number 1-14569
PLAINS ALL AMERICAN PIPELINE, L.P.
(Exact name of registrant as specified in its charter)
Delaware
Capline Pipeline.  Capline Pipeline, in which we own an aggregate undivided joint interest of approximately 54%, is a 631-mile, 40-inch mainline crude oil pipeline originating in St. James, Louisiana, and terminating in Patoka, Illinois. Marathon Pipeline LLC serves as the operator of the pipeline. Capline has direct connections to a significant amount of crude oil production in the Gulf of Mexico. In addition, it has two active docks capable of handling approximately 600,000-barrel tankers and is connected to the Louisiana Offshore Oil Port and our St. James terminal and transports various grades of crude oil to PADD II. Total designed operating capacity is approximately 1.1 million barrels per day of crude oil, of which our attributable interest is approximately 600,000 barrels per day.”
More info and map here: https://www.sec.gov/Archives/edgar/data/1070423/000110465916100030/a15-24557_110k.htm

Capline has been so low capacity going north that they intend to reverse it. However, river flooding could possibly offer the opportunity for it to go at a higher capacity, in conjunction with Bayou Bridge. At any rate, Bayou Bridge oil should be able to go from Texas and north this route.
“Plains says reversed Capline crude pipeline service to begin in third quarter 2020“, FEBRUARY 5, 2019 / 6:53 PM , by Devika Krishna Kumar
http://web.archive.org/web/20190209135924/https://www.reuters.com/article/us-plains-all-amer-oil-results/plains-says-reversed-capline-crude-pipeline-service-to-begin-in-third-quarter-2020-idUSKCN1PU2ND