Based on the news release, and on what we know of the list of invited witnesses, as of Jun 4, 2019, and noting the witnesses who should be listed, and are not, this hearing seems designed to create NIMBY gridlock, while overlooking critical problems, and needed solutions. There also appears a lack of planning and preparation. Perhaps after this posts, new witnesses will be added. The current witnesses have the knowledge to prove us wrong, and we write this with the hope that they will do so.

The most basic point, which probably won’t be addressed, is that Holtec and Areva (now Orano) thin-walled Spent Nuclear Fuel Canisters/Cask Systems are dangerously unfit for purpose. Apart from the disproportionately thin walls of the canisters (1/2 to 5/8th inches thick), they lack proper monitoring systems, and are welded shut, meaning that they cannot be opened without cask destruction.

Instead, what we expect to hear, is witnesses argue why they don’t want the waste and that the other (or someone else) can have it. While neither San Onofre beach front, nor the chosen site in New Mexico, are fit for purpose, this isn’t the way forward. Nor is dumping it off to another unfit site, as one witness has suggested elsewhere. We predict that there will be some blah, blah, blah, about fairness, too. This will ignore the fact that most states and communities had no choice about the siting of nuclear power stations nearby, and the “benefits” were often higher electricity prices, radioactives risks, property devaluation, etc. The high cost of nuclear power has led to many lawsuits, and continues to do so. In part, because of their need of huge amounts of water, nuclear power stations were largely placed in poor rural areas on major waterways. Nuclear power stations have been disproportionately sited in the rural south and often in black communities. But, we probably won’t hear about that in this hearing. Many, and perhaps most, of the nuclear power sites, holding nuclear waste, are at risk of flooding – whether from natural disasters or levee failures. Some are at risk of catastrophic flooding and dam/levee failure, as we write these words. In fact, if it were not for this apparently ludicrous hearing, we would be writing about that point, rather than this. Ironically, California is one of the only states, if not the only, which had the opportunity to vote against nuclear power, but chose nuclear power, instead. And, indeed, due to earthquake, tsunami, and fire hazards, it is perhaps the most unfit. The New Mexico site appears unfit due to climate, geology, and archaeology. Nonetheless, the state of New Mexico has benefitted economically from Los Alamos and Sandia nuclear labs: https://miningawareness.wordpress.com/2019/04/12/critical-fire-danger-weather-along-texas-new-mexico-border-one-of-the-reasons-this-area-is-unfit-for-nuclear-waste. https://miningawareness.wordpress.com/2018/07/30/new-mexico-native-american-archaeological-site-which-holtec-tries-to-hide-in-its-environmental-report-is-over-1000-years-old-perhaps-8000-years-old-comment-tonight-by-1159-pm-et/

Congressman Mike Levin’s newly proposed bill appears designed to protect California, while ignoring the risks of nuclear power stations in rural areas, prone to flooding or other disasters, and where accidents will still badly impact the economy and the country: “The Spent Fuel Prioritization Act, introduced by Representative Mike Levin (CA-49), who represents the district where SONGS is located, and co-sponsored by Chairman Harley Rouda, would amend the Nuclear Waste Policy Act of 1982, directing the Secretary of Energy to prioritize waste or spent fuel from commercial sources based on the operating status of the reactor, local seismic activity, and the population of neighboring areas.” (Excerpt from House Oversight News Release). Note that seismic risk isn’t the only risk, and not necessarily the worst risk.

When we talk about fairness and appropriate siting, we should be looking at the US nuclear labs, too. Strangely, several of them have somehow gotten agreements that they don’t get nuclear waste – only the often good-paying jobs. From a vantage of “fairness”, the state of New Mexico benefitted from good paying jobs at Los Alamos and Sandia. However, it is Idaho National Lab (INL), which has a cool, arid, climate, and which is still actively promoting nuclear power and testing nuclear fuel. There was an early nuclear accident there, too. The part of Idaho where it is located looks like the moon. The population of Idaho is among the lowest. They would also have proper manpower to oversee the waste. Logically, INL could and should be converted from nuclear promoter and fuel tests to nuclear waste keeper. While activists worry about the Snake River aquifer, everyone has endangered waterways and aquifers. And, if the waste is properly stored, monitored, and handled this would be less an issue. Currently INL is experimenting with failed spent fuel rods, etc., which appears risky. We do not condone burial of waste anywhere, though we continue to favor a monitored hard-rock bunker-like facility or possibly an above-ground hardened facility. However, you can be almost certain that we won’t hear about these things. Instead, with the current witness list, one witness will probably talk about reviving a dump plan for Utah, on American Indian land, as they have elsewhere.

Likely absent from the discussion, will be the dangers of nuclear waste transport. Even if that is discussed, we are unlikely to hear the idea of repacking the waste in containers which are both generally safe and appropriate for shipment.

And, will we hear about the ongoing investigation into Holtec corruption? https://miningawareness.wordpress.com/2019/05/25/a-false-answer-a-big-political-connection-and-260-million-in-tax-breaks-re-holtec-international-nuclear/

The first place to start the discussion, however, should be the unfit for purpose canisters, which are only 1/2 to 5/8th inches thick, and are welded shut like sardine cans. To explain the topic, we need Donna Gilmore of San Onofre Safety, and/or Rear Admiral Len Hering. The hearing is in California, and both of these experts live in California. Thus, their absence from the list of witnesses is shocking. The primary link for the hearing should be the San Onofre Safety web site, but it too is conspicuously absent: https://sanonofresafety.org And, in fact, the few links in the news release suggest that this hearing was set up hastily and with little thought.

Welded shut Holtec and Areva (now Orano)-TN NUHOMS spent nuclear fuel canisters stand in stark contrast to the much thicker German CASTOR. We aren’t promoting CASTOR, per se. Rather, there is no good reason that other companies can’t make a similar cask system. In the CASTOR a “pressure sensor continuously measures pressure in the gap between the primary and secondary lid“, and the “system is wired to [the] Main Dosimetry Control Room“. There is a temperature sensor for continuous surface temperature monitoring, too. See “Operational Experience of Castor 440/84 Casks in Dukovany NPP” by Stanislav Kuba, 14th International Symposium on the Packaging and Paper # 022 Transportation of Radioactive Materials (PATRAM 2004), Berlin, Germany, September 20-24, 2004. http://www.iaea.org/inis/collection/NCLCollectionStore/_Public/37/088/37088667.pdf
https://miningawareness.wordpress.com/2018/07/28/holtec-nuclear-waste-storage-system-designed-to-leak-lacks-proper-leak-warning-system-comment-deadline-july-30th-1159-pm

Will we hear about this? https://sanonofresafety.org/2018/11/08/san-onofre-defective-holtec-nuclear-waste-storage-system-must-be-recalled/

From the House Oversight Hearing News Release:
“Examining America’s Nuclear Waste Management, Storage, and the Need for Solutions
Date:
Friday, June 7, 2019 – 11:30am
Location:
Chet Holifield Federal Building. 2400 Avila RoadLaguna, CA 92677
Examining America’s Nuclear Waste Management, Storage, and the Need for Solutions
Subcommittees:
* Environment (116th Congress)
PURPOSE
* The hearing will examine the role of the Nuclear Regulatory Commission in ensuring reactor safety and the management of safe storage and disposal of nuclear waste, safety risks related to nuclear waste storage, and the challenges the country faces in finding a solution for the safe storage and disposal of spent nuclear fuel.
* The hearing will also explore actions that can be taken by Congress to resolve this country’s current nuclear waste storage problem.
BACKGROUND
* The Trump Administration has reportedly chosen to push forward with a project to designate Yucca Mountain as a nuclear waste repository
* Despite the Trump Administration’s decision, Yucca Mountain is not seen as a viable long-term storage space for spent nuclear fuel. The State of Nevada plans to contest the licensing of Yucca Mountain.
* Proposed interim storage solutions in New Mexico and Texas have been met with concerns and opposition from advocacy groups and local communities.
* Operators of decommissioned plants and host communities are tasked with deciding how to manage nuclear fuel because there is no federal permanent repository or interim storage solution for nuclear waste.
* At the San Onofre nuclear generating station (SONGS), the storage of spent nuclear fuel on-site has already proven to have raised certain safety and environmental risks for nearby communities. https://www.nrc.gov/docs/ML1908/ML19080A208.pdf
* The Spent Fuel Prioritization Act, introduced by Representative Mike Levin (CA-49), who represents the district where SONGS is located, and co-sponsored by Chairman Harley Rouda, would amend the Nuclear Waste Policy Act of 1982, directing the Secretary of Energy to prioritize waste or spent fuel from commercial sources based on the operating status of the reactor, local seismic activity, and the population of neighboring areas. https://www.congress.gov/bill/116th-congress/house-bill/2995/text”
https://oversight.house.gov/legislation/hearings/examining-americas-nuclear-waste-management-storage-and-the-need-for-0 Note that there are several links embedded in the original, which we have not added, as they weren’t particularly worthwhile and some places don’t allow links.

If you think that transferring the spent nuclear fuel from spent fuel pools to “dry casks”, as it is currently done, is a magical solution – think again. Read about the problems with spent nuclear fuel canister systems currently in use in the Sierra Club letter below, as well as at: https://sanonofresafety.org And, do a search for Holtec and Areva in the search window of our blog (Mining Awareness).

Both Holtec and Areva canisters are too thin; welded shut, and with no pressure monitor in the lid. This is in stark contrast to German Castor which have a pressure sensor between two lids; a temperature sensor and a radiation sensor, as well as being much, much thicker. They are also stored inside a building, whereas most US spent nuclear fuel appears to be stored outside.

Welded shut, the Areva and Holtec casks cannot be opened for checking without cask destruction, whereas the Castor have bolted lids and can be reopened. For more information see: https://sanonofresafety.files.wordpress.com/2012/05/urgentnuclearwastecanisterproblems.pdf

There appears to be no plan or answer as to what to do with leaky casks, either. Rather, as Donna Gilmore of San Onofre Safety observes, the real plan appears to be to hide the leaks. The measuring radiation at intake vents, rather than of air leaving the casks, adds credence to this belief.
See Donna Gilmore: https://youtu.be/prIBQjedp2Q
And: https://miningawareness.wordpress.com/2015/04/16/holtec-ceo-kris-singh-on-not-repairing-cracked-nuclear-dry-casks/
About measuring at the inlet, as discussed by Donna Gilmore, on the video. That is, they are testing the air going in, and not coming out. “Provide TS AHSM dose rate limits for the 24PT1 and 24PT4 DSCs to provide peak dose rates on the front inlet bird screen and the door of the concrete storage module – similar to those currently provided for the AHSM-HS CoC 1029 Amendment 4 Pre-application Meeting September 2017 p.6
https://adamswebsearch2.nrc.gov/webSearch2/view?AccessionNumber=ML17254A086

Is this why we are stuck with the crappy Holtec spent fuel system? Bribery or related tactics? And French government owned Areva (now Orano)? https://miningawareness.wordpress.com/2015/02/05/why-was-holtec-debarred-as-tva-contractor/

One example of the dangerous way spent nuclear fuel is being handled: https://miningawareness.wordpress.com/2016/11/11/on-monday-holtec-usnrc-to-discuss-peening-of-spent-nuclear-fuel-canister-welds-apparently-before-flipping-areva-nuhoms-canisters-from-sideways-to-upright-to-move-to-holtec-interim-storage/

This is the Sierra Club’s letter to the US NRC, with emphasis added: 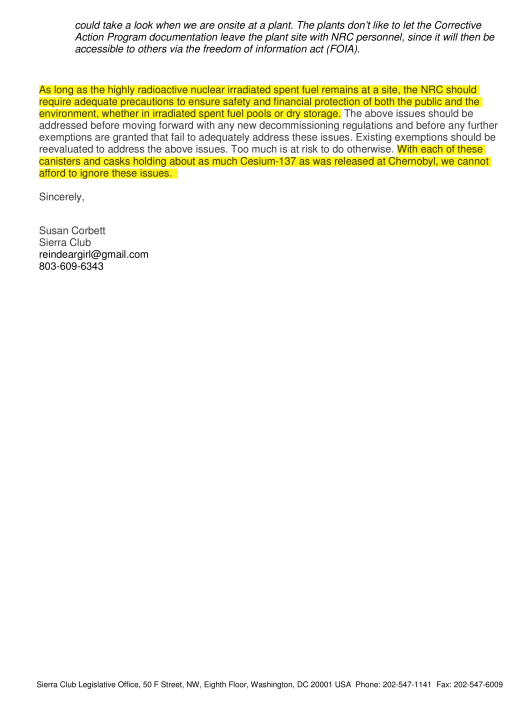