The UK needs to stop whining about their baby, Donald J. Trump, and claim him as their own, because he is theirs. Trump is Britain’s creature – genetically and culturally. They don’t have to give him a state visit (frankly we don’t give a rat’s ass or a rat’s arse as the UK likes to say), but they need to recognize him as their own, take responsibility for him, and they should rightfully keep him. Why should we be stuck with the UK’s unwanted trash, Europe’s trash, or anyone else’s trash. Enough already! 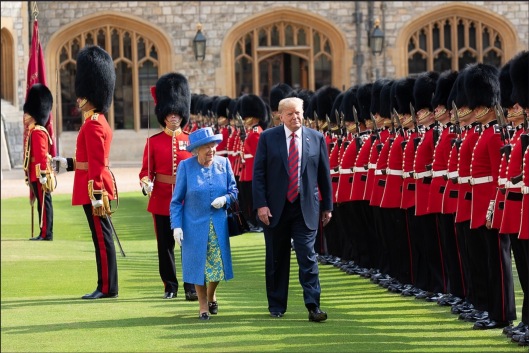 Trump’s mother, Mary Anne MacLeod, was born and raised in the UK, and came to the United States as an adult, during the Great Depression. She was British and by all common sense definitions her son is British. Trump may even be eligible for British citizenship. Becoming American is a multi-generational process. To pretend otherwise denies entire academic fields, such as sociology and anthropology.

Trump’s Mother arrived in the United States in 1930 from the UK, as an adult, and as an unneeded domestic maid. In the 1929 crash a lot of people went broke and were starving. Unemployment was rising in 1930 and had already reached 10%. Rich people lost their money in the crash. More maids were not needed.

We need to start asking why his mother was allowed to immigrate to the United States right after the 1929 crash! Was someone bribed? No one in their right minds would invite immigrants in that context. Unfortunately, the culprit is certainly dead by now, and can’t be punished. However, we can and must ask why the United States continues to be a dumping ground for the world’s excess and unwanted populations. 400 years is enough already!

Trump’s mother migrated from the UK to the US as an adult. And, yet the UK pretends that he’s not their own. One of the most vocal opponents to Trump’s visits has been the Mayor of London, Sadiq Khan, whose grandparents migrated from India to Pakistan and whose parents then migrated from Pakistan to the UK in 1968, two years before he was born. Let’s make a deal: Trump can stay in the UK and Khan can return to the Indian subcontinent.

Trump’s paternal grandmother was very pregnant upon arrival in the United States from Germany. Germany didn’t want his grandparents because the grandfather had evaded his military service. So, Germany is welcome to him too.

The American Revolution was fought against the British from 1775 to 1783. While 7/8ths of my ancestors were in what is now the United States and fought for freedom, Trump’s mother was a British resident, citizen and subject of the British crown until after her arrival in the USA in 1930. The remaining 1/8th of my ancestors migrated during the Irish Great Famine of the 1840s, when the population of the United States was around that of Australia today. My family didn’t invite Trump’s mother and wouldn’t have invited her, as times were hard, during the Great Depression, and Americans were struggling to survive. Americans were hungry.

Trump’s mother was one less hungry mouth for Britain to feed during the Great Depression. And, one more unneeded mouth for the United States to feed. If she worked, then she took a rare job from an unemployed American.

From VOA News:
“Pomp and Protests: Trump’s State Visit to Britain
May 31, 2019 5:05 AM Patsy Widakuswara
WHITE HOUSE —
U.S. President Donald Trump will be in Britain June 3 on a state visit by invitation of Queen Elizabeth II and participate in events commemorating the 75th anniversary of D-Day.

This will be the second time Trump has gone to Britain since taking office, after a working visit in July of last year.

A state visit involves more pomp and pageantry, and the host country pays the costs. An invitation was extended after Trump took office but was delayed for a number ofreasons, including security.

“There is an enormous controversy surrounding a state visit for Donald Trump,” said Charles Kupchan, senior fellow at the Council on Foreign Relations. The biggest news of the visit is that it’s happening, he said. “It was on again off again, on again off again.”

Trump will take part in the 75th anniversary of the D-Day invasion, in which 150,000 Allied troops pushed German forces from France. He will attend events in Portsmouth, and in Normandy, France, alongside French President Emanuel Macron.

The president will attend a state banquet at Buckingham Palace and cultural engagements with members of the Royal Family.

May resigns after Trump leaves
Trump is scheduled to hold a bilateral meeting with Prime Minister Theresa May, who is resigning June 7, two days after Trump departs, over failure to reach a deal on Britain’s exit from the European Union.

Trump, a Brexit supporter, has in the past criticized May’s handling of the issue. He has in some ways reached out to the Brexiteers, Kupchan said, and told May at one point that “she’s not firm enough, she’s not getting out quickly enough, and completely enough.”

Still with May having recently announced her resignation, the expectation is that Trump would speak highly of her in his public appearances with her and wish her all the best, said Jacob Parakilas, an analyst at the Chatham House in London. But he added that there’s not much depth to the relationship.

“I don’t think the two of them see eye-to-eye or have pretty strong personal bond,” he said.

Meeting with Johnson or Farage?
On Thursday, days before his departure, Trump said he may meet with Boris Johnson and Nigel Farage, pro-Brexit politicians seeking to replace May.

“It’s not my business to support people. But I have a lot of respect for both of those men,” Trump said.

On a briefing call to reporters, a White House senior official would not confirm whether such a meeting would take place.

Trade, Brexit, Iran and China
Trump and May could still discuss major issues related to the current U.S.-U.K. relationship, including negotiations on a trade agreement.

The U.K. is keen to begin bilateral trade conversations with the U.S., said Kupchan, as it anticipates no longer being part of the EU.

Kupchan said the president will want an update on where things stand with Brexit. Although that may not be a very long conversation because “the balls are still up in the air,” he said.

Officials are also expected to discuss how to deal with Chinese investments and Huawei in particular, said Parakilas. He said the U.S. has taken a much more hard-line approach than the U.K. on this issue as well as on confronting Iran, which the U.S. under the Trump administration has much more appetite for, than either the U.K. or France.

‘Trump Baby’ to appear again
Last year more than a 100,000 people protested in London and elsewhere in Britain. This year organizers say they expect similar numbers, protesting against Trump’s policies including immigration and climate change.

“Trump Baby,” the giant balloon depicting the president as an angry infant, is expected to make another appearance. Matt Bonner, the artist behind the giant inflatable said he would let it fly again if a crowdfunding campaign can raise $38,000 (30,000 pounds) for groups backing causes from climate action to women’s rights.

Last year London Mayor Sadiq Khan gave permission for the 6-meter tall balloon to fly above Parliament Square in London during Trump’s visit, provoking the president’s anger, who said it was an insult to the leader of Britain’s closest ally.

The senior administration official said that the White House is not concerned about the planned protests.

“We haven’t talked about this at all,” she said.
Patsy Widakuswara  Patsy Widakuswara is VOA’s Senior White House Correspondent. She joined Voice of America in March 2003. With over 20 years experience in international broadcast journalism, she currently reports via multi-media platforms from the White House where she focuses on delivering informative, engaging U.S. content to an international audience.” https://www.voanews.com/a/pomp-and-protests-on-trumps-britain-state-visit/4940167.html

Our bets are on Trump meeting with his ally Nigel Farage, who appears likely in deep shit in the United States in relation to Roger Stone, Wikileaks, Russiagate, etc. Sadly they may be planning the pardon of Farage. Or, perhaps, their new home in Russia, where they can’t be extradited?