Washington, D.C. –Today, House Judiciary Chairman Jerrold Nadler (D-NY) issued subpoenas to Annie Donaldson, former chief of staff for former White House counsel Don McGahn and for Hope Hicks, former White House Communications Director. The subpoenas were issued for testimony and documents related to the House Judiciary Committee’s ongoing investigation into obstruction of justice, public corruption, and other abuses of power by President Trump, his associates, and members of his Administration.  The redacted version of Special Counsel Robert Mueller’s report documented alarming misconduct and obstruction of justice by President Trump. Donaldson and Hicks were critical witnesses to this behavior.

Chairman Nadler issued the following statement:
“As I said earlier today, the Judiciary Committee’s investigation into obstruction of justice, public corruption and abuse of power by President Trump and his Administration will continue.

I have issued these subpoenas today to two critical witnesses who have worked closely with the President.

We are seeking the information in order to conduct proper oversight, consider potential legislation and perform our constitutional duties.”

On March 4, 2019, Hope Hicks and Annie Donaldson were sent document requests as part of the Committee’s investigation.

Ann Donaldson (Talley) was chief of staff for White House counsel Don McGahn. Her husband, Brett Talley, was Deputy Assistant AG for the DOJ [1], and reportedly transferred to be an assistant US Attorney (USAO) for the Eastern District of Virginia, [2] though we were unable to find anything about him on the USAO web site for the E. District of Virgina.

First five pages of Hope Hicks subpoena, including topics. Document request for Ann Donaldson looks the same or similar, based on a cursory glance. The originals in their entirety are at the links above. 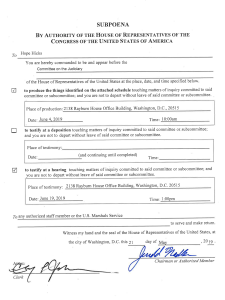 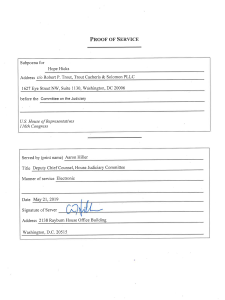 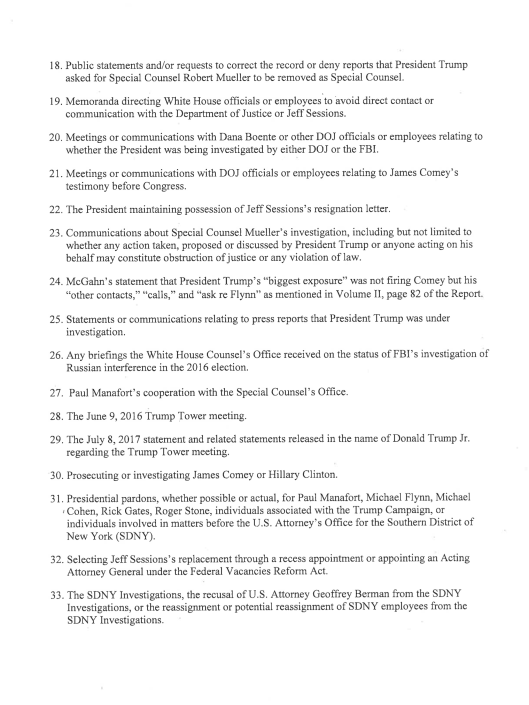 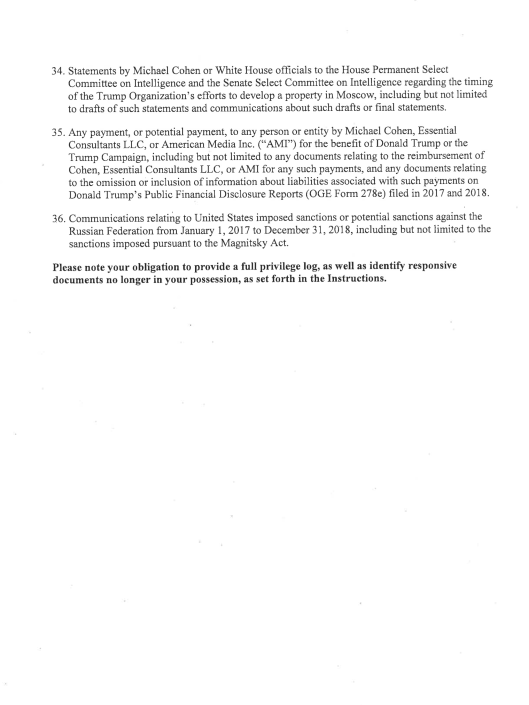 Note 1:
“Brett Joseph Talley (born 1981)[1] is an American lawyer and author who currently serves as a Deputy Assistant Attorney General in the Department of Justice. In September 2017, he was nominated by President Donald Trump to fill a vacancy on the United States District Court for the Middle District of Alabama.[2] His nomination drew controversy due to his lack of judicial experience, partisan personal blogging, and failure to disclose that he was married to Ann Donaldson, the chief of staff to White House counsel Don McGahn. He became the third judicial nominee since 1989 to receive a unanimous rating of “not qualified” from the American Bar Association.[3] On December 13, 2017, Talley withdrew his name from consideration for the appointment.[4]” https://en.wikipedia.org/wiki/Brett_Talley
1. “United States Senate Committee on the Judiciary: Questionnaire for Judicial Nominees: Brett Joseph Talley” https://www.judiciary.senate.gov/imo/media/doc/Talley%20SJQ.pdf
2. Johnson, Carrie (December 13, 2017). “White House: Nomination of Alabama Lawyer Brett Talley ‘Will Not Be Moving Forward'”. NPR. Retrieved December 13, 2017.https://www.npr.org/2017/12/13/570499146/white-house-nomination-of-alabama-lawyer-brett-talley-will-not-be-moving-forward
3. Apuzzo, Matt; Schmidt, Michael S. (November 13, 2017). “Trump Judicial Pick Did Not Disclose He Is Married to a White House Lawyer”. The New York Times. Ihttps://www.nytimes.com/2017/11/13/us/politics/trump-judge-brett-talley-nomination.html
4. Savage, David (December 13, 2017). “Embattled Trump judicial nominee Brett Talley withdraws”. Los Angeles Times http://www.latimes.com/politics/washington/la-na-pol-essential-washington-updates-embattled-trump-judge-nominee-withdraws-1513192192-htmlstory.html ”
https://en.wikipedia.org/wiki/Brett_Talley