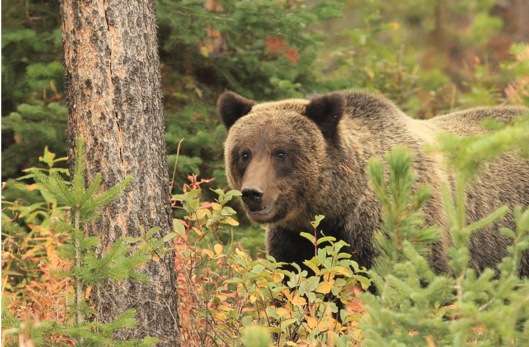 Grizzly Bear on the Bridger-Teton National Forest, US Forest Service

Grijalva’s bill ensures that grizzly bears are permanently protected for their ecological and cultural value and guarantees Native American tribes a role in conserving and managing the species.

Grizzly bears are considered sacred by many tribes, but only a small fraction [3] of historic grizzly populations now exist in the lower 48 states. In the continental United States, the grizzly bear population of approximately 1,500 is far below the species’ historic level of nearly 50,000 animals. Grizzlies continue to face threats from human encroachment and climate change.

The species faces an uncertain legal future. In 2017, the Department of the Interior removed the Greater Yellowstone Ecosystem (GYE) grizzly bear population from the endangered species list. The states of Wyoming and Idaho soon announced grizzly bear trophy hunts.

In 2018, a federal court struck down the decision to delist the GYE grizzly bear, ruling that grizzlies now living in isolated pockets can’t be delisted one pocket at a time given the species’ overall struggles to survive. That ruling restored federal protections for the population and blocked any potential trophy hunts. The Trump administration and the state of Wyoming have appealed that decision, and an appeals court ruling is possible later this year.

Native American tribes [4] across the American West consider the grizzly bear a sacred animal. For centuries, tribes have revered the multifaceted behaviors of grizzly bears and respected their strength, size, and speed. While different tribes hold different beliefs about grizzly bears, many consider grizzly bears to be closely tied to the spirits of ancestors.

More than 170 tribal nations signed “The Grizzly: A Treaty of Cooperation, Cultural Revitalization and Restoration,” [5] making it the most-signed tribal treaty in history. The treaty honors, recognizes, and revitalizes the ancient relationship between tribal nations and the grizzly bear, and aims restore balance to land stewardship.

The preamble to the treaty, which has become known as the Grizzly Treaty [6], states:

Since time immemorial, hundreds of generations of the first peoples of the FIRST NATIONS of North America have come and gone since before and after the melting of the glaciers that covered North America. For all those generations the GRIZZLY has been our ancestor, our relative. The GRIZZLY is part of us and WE are part of the GRIZZLY culturally, spiritually and ceremonially. Our ancient relationship is so close and so embodied in us that the GRIZZLY is the spirit of our holistic eco-cultural life-ways.

“The grizzly bear – Hoonaw, as we call him – is held in high esteem, not only in our Hopi culture, but by other Native people in the United States and Canada. He is a healer and a medicine man. He plays a central role in the traditions, ceremonies, and the sovereignty of the Native people,” said Benjamin H. Nuvamsa, member of the Hopi Bear Clan and former chairman of the Hopi Tribe. “It was the most powerful of bears that guided and protected my ancestors to arrive at Tuuwanasavi (‘Center of the Universe’), as we call the place where we live today. The bear, from which my ancestors took their name, gave rise to other important clans at Hopi. Today, the Bear Clan continues as traditional leaders, and an influential clan in the Hopi culture and Hopi way of life.”

“There is no soundbite that can communicate the importance of the grizzly in our cultures, but the fact that our ancestors wouldn’t say the name of the grizzly out of respect speaks to the Great Bear’s cultural significance,” said Tom Rodgers, member of the Blackfeet Nation and Rocky Mountains Tribal Leaders Council. “It is time that tribal nations had input and parity in decisions that will determine the future survival of our sacred ancestor, the grizzly bear.”

“The grizzly bear is integral to the culture and spiritual practices of the Northern Arapaho people. Our elders teach how the grizzly bear brought us our medicines. Grizzlies know not only about roots and herbs for physical healing but also about healing mental conditions, they say,” said Lynnette Grey Bull, senior vice president of the Global Indigenous Council and spokesperson of the Northern Arapaho Elders Society.  “In the socio-economic bondage we survive in, our reservation communities need that healing more than ever today. The grizzly bear isn’t a ‘trophy game animal.’ The grizzly is our relative, a grandparent. The frontier mentality practice of ‘trophy hunting’ our relative is abhorrent to us, and in no way reflects the ‘best available science’ precept of the Endangered Species Act.”

Grijalva’s bill, formally designated H.R. 2532, is available online at http://bit.ly/2YdDeHy. Among other measures, the bill:
* Bans trophy hunting and non-discriminatory predator control measures that may result in taking of grizzly bears on public lands
* Permits “take” and “possession” of grizzly bears only for certain purposes going forward
* Requires federal consultation with tribes before relevant permits are issued and before any major federal action that could impact grizzly bears or their habitat
Creates a process for reintroduction of grizzly bears on suitable land of willing tribes
Press Contact
Media Contact: Adam Sarvana