Deja Vu all over again

US House oral history project interview (with emphasis our own):
“The Honorable Elizabeth Holtzman U.S. Representative of New York (1973–1981)

Special Exhibit: A Century of Women in Congress

“I Really Felt As Though I Were in Quicksand” Representative Holtzman remembers feeling overwhelmed by the extent of the Watergate scandal. Interview recorded March 10, 2016

At some point in this process, I really felt as though I were in quicksand, that even though I disagreed strongly with Richard Nixon’s policies, it was just overwhelming to know all of the details of his misconduct.

You couldn’t come up with a list that was big enough.

It was, so I—that’s the feeling I had, was just overwhelming.

I never expected to see that.

It was very sobering.

Nobody took any pleasure, not—I know the Republicans didn’t, but nobody that I know.

And having to vote for the impeachment of Richard Nixon was one of the most sobering, somber things I ever had to do in my life. I did not want to have to do it.

I would have wished a thousand times that he hadn’t acted in the way he had so that I would not have to sit in judgment on him. ”
https://historycms2.house.gov/Oral-History/Women/Women-ClipTranscripts/holtzman-quicksand

2011 C-Span oral history interview with Elizabeth Holtzman (about Nixon Impeachment process), video Part 2 is only 2 1/2 minutes long: https://youtu.be/nrPvAQYaNuc She says that the turning point would be the tapes and the overwhelming amount of evidence. Everywhere you turned there was misconduct and the coverup was enormous, she notes. On the articles of impeachment, she said that the first article was narrowly defined, almost like an indictment. It was for obstruction of justice, perjury, suborning perjury. The second article was about rule of law, abuse of power, which included wiretapping, misuse of government agences, the enemies list, break-ins and the Kliendiest matter, she explains. The third article was contempt of Congress, as discussed here: “An impeachment process against Richard Nixon was formally initiated on February 6, 1974, when the United States House of Representatives passed a resolution, H.Res. 803, giving its Judiciary Committee authority to investigate whether sufficient grounds existed to impeach Richard Nixon, the 37th President of the United States[1] of high crimes and misdemeanors, primarily related to the Watergate scandal. This investigation was undertaken one year after the United States Senate established a select committee to investigate the 1972 break-in at the Democratic National Committee headquarters at the Watergate office complex in Washington, D.C. and the Nixon Administration’s attempted cover-up of its involvement. Following a subpoena from the Judiciary Committee, in April 1974 edited transcripts of many Watergate-related conversations from the Nixon White House tapes were made public by Nixon, but the committee pressed for full tapes and additional conversations. Nixon refused, but on July 24, the U.S. Supreme Court ordered him to comply. On July 27, 29, and 30, 1974, the Committee approved three articles of impeachment against Nixon, for obstruction of justice, abuse of power, and contempt of Congress, and reported those articles to the House of Representatives. Two other articles of impeachment were debated but not approved. Before the House could vote on the impeachment resolutions, Nixon made public one of the additional conversations, known as the “Smoking Gun Tape”, which made clear his complicity in the cover-up. With his political support completely eroded, Nixon resigned from office on August 9, 1974. It is widely believed that had Nixon not resigned, his impeachment by the House and removal from office by a trial before the United States Senate would have occurred….”
Read more here: https://en.wikipedia.org/wiki/Impeachment_process_against_Richard_Nixon 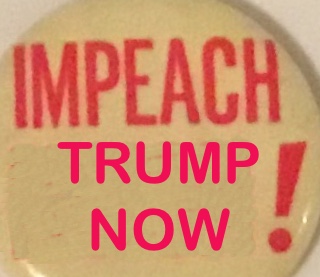