Why did Kamala Harris tell Joe Biden that her uncle is a journalist and mathematician (2:20 on video)? She didn’t think it a good idea to point out that her uncle works for an Institute funded by India’s Ministry of Defence? US secrets going directly to India, through family ties? Americans need to stop being so naive. Her uncle Gopalan Balachandran is to the left. 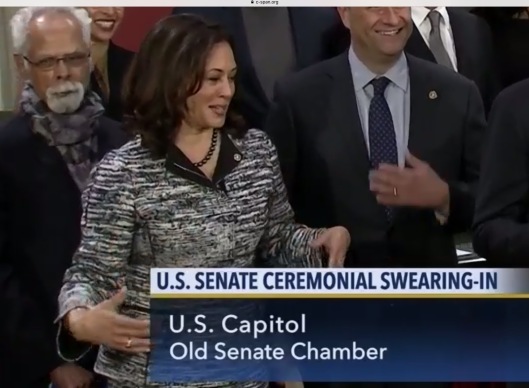 https://www.c-span.org/video/?c4640845/kamala-harris-sworn-vp-biden
This looks like the same person, he has the same name as her uncle, both live in New Delhi, and more than one news reports state that Kamala’s uncle works for the Institute for Defence Studies and Analyses.

US secrets going directly to India, through family ties? Kamala Harris’ uncle works for a think tank, the Institute for Defence Studies and Analyses, which is funded by India’s Ministry of Defence. It provides training for the Government of India’s civilian and military personnel. His area of expertise seems to be nuclear. He is or was a Consultant for the Americas Division of the Indian Ministry of External Affairs, as well. This is the Americas Division of the Ministry of External Affairs for India. Her grandfather was a Government of India diplomat, too.

Her uncle’s occupation has appeared in more than one news source from India, though it apparently has been scrubbed from a Times of India article, or only appears in the Mumbai and New Delhi editions.

How could anyone even consider a candidate whose family works for and advises a foreign country? Especially India, which isn’t and wasn’t our ally? And, India is very close to Russia and was in the Soviet orbit of influence. Kamala Harris’ grandfather was a diplomat for India. Imagine for a minute if Trump’s uncle advised the British or German government, rather than the US government. They are allies. But, this would still be wrong. Imagine if Trump’s uncle advised Russia and he’s close to his uncle! And, retirement by Kamala’s uncle won’t cut it, either. Her father has been an advisor to Jamaica and its Prime Ministers, too.

Kamala Harris’ maternal uncle Gopalan Balachandran (G. Balachandran) is a “consulting fellow at the Institute for Defence Studies and Analysis, Delhi” [1]. IDSA provides training for government of India civilian and military personnel. It is funded by India’s Ministry of Defence.

He seems to write and speak primarily about nuclear. Here he is in 2018 at a nuclear business platform and listed as a distinguished fellow at IDSA. This means he still worked for them when Kamala was sworn in: https://archive.li/Qe0b9

India was close to the Soviet Union and remains close to Russia. Her grandfather, to whom she was reportedly close was one of India’s diplomats. Journalists have gone AWOL on Kamala so we lack information about his diplomatic work, except a mention of his being posted in Zambia at one point.

Kamala Harris was raised in Canada and born to immigrant student parents. The Westmount Montreal suburb in which Kamala was raised remains the second most affluent in Canada.

Not only was Kamala’s maternal grandfather a diplomat in an India which has been historically allied with the Soviet Union, but the surname that her mother’s family uses is the same as several prominent communist leaders (Gopalan). Due to the naming patterns and the failure of journalists to do their job, we don’t know if they are related. Is this why she didn’t stay in California and she moved to Canada? Journalists need to inquire further into her background.[2]

Kamala was reportedly close to her grandparents and frequently visited them in Besant Nagar which “is an affluent, residential neighborhood in South Chennai, India.”[3]

Indian, below, means of the country of India, i.e. East Indian or Asian Indian.
“The Institute for Defence Studies and Analyses (IDSA), New Delhi, is an Indian think tank for advanced research in international relations, especially strategic and security issues, and providing training to civilian and military officers of the Indian government.

It is funded by the Indian Ministry of Defence but operates as a non-partisan and autonomous body. It aims to promote national and international security by carrying out research on defence and security-related issues and disseminating the knowledge among the policy-makers and wider public.[1][2] The current Director General is Ambassador Sujan R. Chinoy[3], who took over the reins of IDSA on 3 January 2019 on a three-year assignment approved by the Appointments Committee of the Cabinet. IDSA has long been regarded as one of India’s most influential think-tanks. The University of Pennsylvania’s Global Go To Think Tank Index ranked IDSA 41st in the world in 2017. It received the top position among Indian think tanks.[4]…”
https://en.wikipedia.org/wiki/Institute_for_Defence_Studies_and_Analyses

Kamala’s sister was a policy advisor for Hillary Clinton: https://en.wikipedia.org/wiki/Maya_Harris

Will the US accept yet another Manchurian candidate? Dem-wits need to hurry up already and impeach Trump and then worry with 2020. The impeachment process allows discovery of information. Investigation of Kamala Harris needs to begin, too. They can investigate Hyde-Smith’s assistant while they are at it: https://miningawareness.wordpress.com/2018/11/25/hyde-smiths-special-assistant-umesh-sanjawala-seems-to-have-bought-his-job-for-a-57077-campaign-donation-to-hyde-smith-in-2011-75-of-his-salary-at-the-time/

Notes and Additional Info:
[1] “Kamala always achieved what she set her mind to, says aunt” The Times of India, 23 Jan 2019 by Kamini.Mathai The information was apparently removed from this article. The bottom of the article was simply cut off: http://web.archive.org/web/20190123093137/https://timesofindia.indiatimes.com//india/kamala-harris-always-achieved-what-she-set-her-mind-to-says-aunt/articleshow/67649475.cms? But, still appears here: https://www.pressreader.com/india/the-times-of-india-new-delhi-edition/20190123/282222306948447
Confirmed here: “Indian-American Kamala plans to run for US Presidential polls” Eenadu India, News Dog: https://archive.li/3iTgO
Another bio: https://archive.li/nleGU
[2] https://miningawareness.wordpress.com/2019/01/29/explained-its-wrong-for-kamala-harris-to-appropriate-black-american-identity/
[3] http://web.archive.org/web/20190212174515/https://www.news18.com/news/india/as-kamala-harris-enters-white-house-race-family-back-in-chennai-takes-trip-down-memory-lane-2029249.html
https://en.wikipedia.org/wiki/Besant_Nagar
https://archive.li/https://www.thehindu.com/news/cities/chennai/Californias-next-A-G-citys-pride/article15720757.ece

Screen shot for confirmation, just in case. Nonetheless, it is clear from the pictures that this is the same person. Perhaps he is a spy for the US in India? This seems a rather risky assumption. Kamala Harris’ family must be investigated. India’s a lovely place to visit.