This letter indicates that Trump-Bush AG William Barr sat on the Mueller report summaries for weeks, even though they had already been prepared for release to the public by the Special Counsel team.

Mueller letter to William Barr (emphasis our own; screenshot of original and link follows):

Re: Report of the Special Counsel on the Investigation Into Russian Interference in the 2016 Presidential Election and Obstruction of Justice (March 2019)

I previously sent you a letter dated March 25, 2019, that enclosed the introduction and executive summary for each volume of the Special Counsel’s report marked with redactions to remove any information that potentially could be protected by Federal Rule of Criminal Procedure 6(e); that concerned declination decisions; or that related to a charged case. We also had marked an additional two sentences for review and have now confirmed that these sentences can be released publicly.

Accordingly, the enclosed documents are in a form that can be released to the public consistent with legal requirements and Department policies. I am requesting that you provide these materials to Congress and authorize their public release at this time.

As we stated in our meeting of March 5 and reiterated to the Department early in the afternoon of March 24, the introductions and executive summaries of our two-volume report accurately summarize this Office’s work and conclusions. The summary letter the Department sent to Congress and released to the public late in the afternoon of March 24 did not fully capture the context, nature, and substance of this Office’s work and conclusions. We communicated that concern to the Department on the morning of March 25. There is now public confusion about critical aspects of the results of our investigation. This threatens to undermine a central purpose for which the Department appointed the Special Counsel: to assure full public confidence in the outcome of the investigations. See Department of Justice, Press Release (May 17, 2017).

While we understand that the Department is reviewing the full report to determine what is appropriate for public release — a process that our Office is working with you to complete — that process need not delay release of the enclosed materials. Release at this time would alleviate the misunderstandings that have arisen and would answer congressional and public questions about the nature and outcome of our investigation. It would also accord with the standard for public release of notifications to Congress cited in your letter. See 28 C.F.R. 609(c) (“the Attorney General may determine that public release” of congressional notifications “would be in the public interest.”). 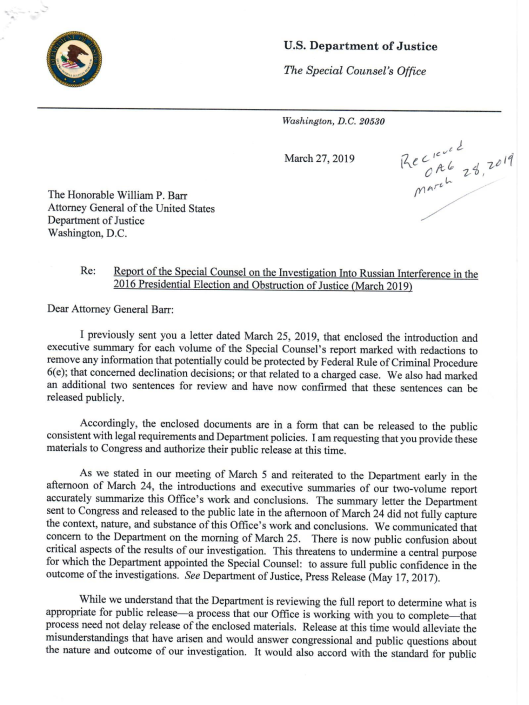 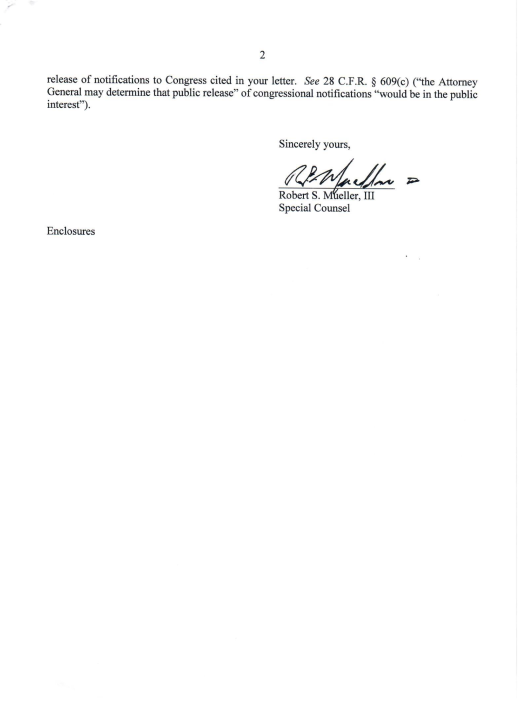