Then UN Ambassador Nimrata Nikki Randhawa Haley visiting with the recently indicted for corruption, Trump pal, Israel’s PM Benjamin Netanyahu in June 2017. Last October, the day after the watchdog group CREW raised ethics questions about her, she suddenly resigned as UN Ambassador. At the end of February she was nominated to the board of directors of Boeing. 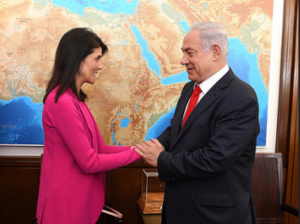 Nikki Haley recently stated: “Health care costs are too high that is true but comparing us to Finland is ridiculous. Ask them how their health care is. You won’t like their answer.”
VOA News observes that “It is more likely that it is the former U.N. ambassador who does not like their answer… it costs an average of $12,000 for a woman to have a baby in the United States, while in Finland it costs only $60… And according to the World Health Organization, Finland has the lowest maternal mortality rate in the world. South Carolina, which Haley governed from 2011-2017 when she left to join the Trump administration, has seen its maternal mortality rates drop slowly, but they still remain among the highest in the United States. There are also wide disparities in who is affected. Many more African-American mothers are likely to die from complications of childbirth than white mothers in the southern state.” (Besheer-VOA News, 21 March 2019)

Even though she supposedly has a degree in accounting, Nikki apparently doesn’t get math. Her family business, “Exotica International”, where she was the “accountant,” “repeatedly failed to pay its income taxes and kept money withheld for its employees’ taxes for its own use,” according to news reports. [1] It is worth noting that under US law, Nikki Haley’s Asian-Indian family gets to claim “minority” status, even though Asian Indians are a huge chunk of world population. This makes them eligible for Minority-Small Business Administration (SBA) loans and other programs, and, in some instance, minority contract set asides. Yes, you got it, the minority business help that everyone thought was supposed to be for African American descendants of slaves is gotten by new immigrants who were never enslaved, nor persecuted in this country. Did her family pay back the SBA loan, if they were given one? See: https://www.mbda.gov/page/how-certifications-can-help-grow-your-business “Some minority groups are presumed to be socially and economically disadvantaged and can qualify for the 8(a) program. These groups include: African Americans, Hispanic Americans, Native Americans, Asian Pacific Americans and Subcontinent Asian Americans.” https://www.sba.gov/starting-business/how-start-business/business-types/minority-owned-businesses https://www.mbda.gov/news/blog/2012/03/what-8a-business-development-program https://www.sba.gov/sites/default/files/files/Helpful%20Tips%20to%20apply%20to%20the%208(a)%20Business%20Development%20Program%20PowerPoint%20Presentation%20-%2003%2006%2014.pdf

With Nikki Randhawa Haley not getting the maternal and infant mortality rate thing right, nor hospital quality, AND with Nikki pushing nuclear, it becomes clear that either her father, Dr. Randhawa, didn’t know much biology, or she didn’t learn anything about it from him. What was he teaching his biology students? Nuclear/radiation is good for you? Is that why they needed to import an Asian-Indian via Canada? They couldn’t find an American biologist to say nuclear is good for us? Just wondering. India sent us Mohan Doss via Canada to push such lies. Remember that, by their own admission, Nikki is either kin or family friend to Holtec nuclear waste can king Kris Singh, who will likely be the death of us all, due to the poor quality of his nuclear waste cans. But, hey, we American dumb-asses must have immigrants, because they are always so much smarter than we are [sarcasm]. That’s what we have been told for many decades [not sarcasm]. Of course, we don’t know if Nikki and Kris Singh are really ignorant, or if they are competent at working in their own interest and against the interest of the American public-US taxpayer. Some people turn their smarts into being con-artists. India was also in Moscow’s orbit of influence during the Cold War, and remains so. https://miningawareness.wordpress.com/2018/07/29/holtec-nuclear-waste-cans-kris-singh-apparent-bribery-and-allegation-of-bribery/ Mohan Doss: https://miningawareness.wordpress.com/2018/08/16/trump-epa-proposal-revealed-by-proponent-as-means-of-avoiding-nuclear-operating-costs-cleanup-costs-evac-after-nuclear-disaster-comment-by-tonight-1159-pm-et/

This was from when she was proposed as Secretary of State rather than UN Ambassador, but there are facts which still hold, like Kris Singh’s campaign donation: https://miningawareness.wordpress.com/2016/11/21/gov-nikki-haley-55000-from-holtec-nuclears-kris-singh-sec-of-state-interprets-treaties-possible-conflict-of-interest-in-application-of-nuclear-liability-agreement
The US has failed to properly vet or examine need for the majority of immigrants for too long, as demonstrated by Trump’s parents: https://miningawareness.wordpress.com/2019/03/15/trump-jumps-into-his-british-mothers-home-debate-re-brexit Just by luck, sometimes the US got good immigrants, but sometimes not. Good or bad there are too many and largely unneeded. We can’t fix the past, apart from putting the crooked ones in jail, but we can fix the future and stop unneeded immigration. Anyone who thinks a legal US immigration rate of approximately 1 million per year is cool, needs to welcome between ten and twenty to live with them in their apartment or home. It is important to recall, as well, that only around 10% of the million are refugees or asylum seekers. The rest just want to come.

Haley, a savvy politician who as President Donald Trump’s United Nations ambassador from 2017 until December 2018, regularly topped opinion polls as the most popular member of his administration, ignited the Finns when she tried to take a swipe at a tweet by Democratic U.S. presidential candidate Senator Bernie Sanders.

Sanders, who has made universal health care one of his signature platforms, said it costs an average of $12,000 for a woman to have a baby in the United States, while in Finland it costs only $60.

Haley, who is touted as a rising star in the Republican Party and a potential presidential candidate in 2024, shot back that, “Health care costs are too high that is true but comparing us to Finland is ridiculous. Ask them how their health care is. You won’t like their answer.”

It is more likely that it is the former U.N. ambassador who does not like their answer.
The reaction was immediate, with hundreds of people identifying themselves as Finns happy with their health care system offering statistics and anecdotes about how good it is.

While personal income tax rates are very high — 51.60 percent — Finns get many services in return, not just health care. But for new mothers, the system offers comprehensive services.

While the charge to the patient who gives birth is only $60, the government picks up the rest of the cost. In addition, new mothers receive a generous care package with clothes and baby care products. Mothers and their babies also get free medical checkups. Day care is heavily subsidized and mothers get at least four months’ paid maternity leave.

And according to the World Health Organization, Finland has the lowest maternal mortality rate in the world.

South Carolina, which Haley governed from 2011-2017 when she left to join the Trump administration, has seen its maternal mortality rates drop slowly, but they still remain among the highest in the United States. There are also wide disparities in who is affected. Many more African-American mothers are likely to die from complications of childbirth than white mothers in the southern state.

Haley’s former counterpart at the United Nations, Finnish Ambassador Kai Sauer, also sent out a string of tweets touting his nation’s health care system. He noted in addition to its strong record on preventing maternal mortality, Finland has the world’s third-lowest infant mortality rate and the second-lowest mortality rate for cancer in the European Union.

Sauer’s tweets came several hours after Haley’s original one and he apologized for that noting, “We were out celebrating our rank as the happiest country of the world.”

Since leaving her U.N. post at the end of December, Haley has been spending much of her time on the social media platform tweeting about lighter fare, including learning how to use the taxi service app Uber, her new favorite lipstick and her beloved dog, Bentley.

She has also set up a new advocacy group, “Stand for America” that will focus on “promoting public policies that strengthen America’s economy, culture, and national security.”

Last month, U.S. aerospace manufacturer Boeing announced that it had nominated Haley to join its board of directors. Company shareholders will vote on whether to give her a seat at their annual shareholders meeting on April 29.

Boeing has recently come under intense scrutiny after two of its 737 Max aircraft crashed in the space of five months, killing all aboard.

Haley, a strong advocate for Israel during her U.N. tenure, was recently honored by having a commemorative coin struck with her image on it by three Israeli religious organizations.

According to the Associated Press, the coin features Haley’s face set with the U.N. building in the background and goes for $65 in silver and $90 in gold.

While at the U.N., Haley was a vocal supporter of Trump’s decision to move the U.S. embassy from Tel Aviv to Jerusalem; to slash funding to the U.N. agency that cares for Palestinian refugees; and to withdraw from the U.N. Human Rights Council, which is seen by critics as overly focused on Israel.

Haley is also hitting the lucrative speakers’ circuit. Last week, she became the first woman to give the keynote address at the Society of The Friendly Sons of St. Patrick, and June 3, she is scheduled to be the main speaker in Washington at the Campaign for Life Gala, which advocates against abortion. Last year, Trump delivered the keynote address.

Haley’s post at the United Nations remains unfilled nearly three months after her departure. Trump’s first choice for the post, former State Department spokesperson Heather Nauert, withdrew her name from the process. On Feb. 22, the president announced he would nominate Kelly Craft, a top Republican donor and U.S. ambassador to Canada, to the post, but her name has not yet been sent to the Senate for approval. ” https://www.voanews.com/a/former-un-ambassador-nikki-haley-walks-into-twitter-feud-with-finland/4841544.html

A South Carolina Democratic press release, reproduced in the above article by Haire (2010): “Why Haley Wants to Repeal Corporate Tax: She Never Pays!” says that there were three tax liens against her family’s company (Exotica International) between 2003 and ca 2010. She has called herself the financial manager/accountant of the company (store). However, records indicate that Exotica International’s taxes “were at least 19 months past due each time the state filed a lien. Two of the tax liens were for failing to pay corporate income taxes and one was for not turning over taxes withheld from employee checks. The company paid nearly $4,000 to remove the liens…” http://web.archive.org/web/20181215084109/http://www.scdp.org/why-haley-wants-repeal-corporate-tax-she-never-pays http://web.archive.org/web/20181215084109/https://www.charlestoncitypaper.com/HaireoftheDog/archives/2010/09/10/nikki-haley-is-a-certified-slack-ass-accountant

“Michael Haley’s Real Estate Deal With Family Property”
August 26, 2018 by Irwin Arieff https://www.passblue.com/2018/08/26/michael-haleys-real-estate-deal-involving-family-property/http://web.archive.org/web/20180830013027/https://www.passblue.com/2018/08/26/michael-haleys-real-estate-deal-involving-family-property/
According to the article, her parents sold property where the store had been located for a few dollars to her and her husband, probably to avoid tax, and her husband sold it for a profit.