Above, Roger Stone is located in the two right frames with Reagan-Bush. Original here: https://www.reaganlibrary.gov/sites/default/files/archives/audiovisual/contactsheets/c11150.jpg

Stone and Manafort had a lobbying firm together, which represented Trump. They also headed up Reagan’s transition team.

Roy Cohn was mentor to both Trump and Stone:
https://miningawareness.wordpress.com/2019/01/25/the-evil-trio-from-mccarthy-to-trump-via-watergate-reagan-bush-cohn-stone-manafort-3 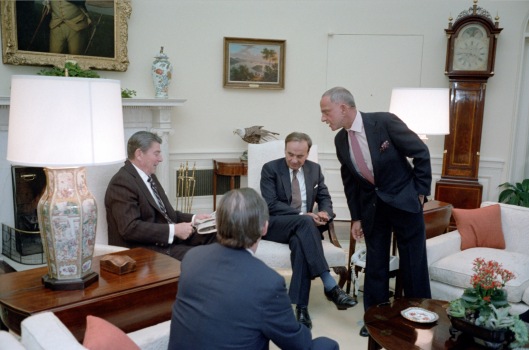 Get Me Roger Stone – Trailer: http://youtu.be/5IPyv4KgTAA

C27281-24, King Fahd and the Reagan’s greeting Ivana Trump with Donald Trump at a state dinner for King Fahd of Saudi Arabia in the blue room. 2/11/85

From VOA News:
“Who Is Roger Stone?
January 25, 2019 11:08 PM, by Masood Farivar
WASHINGTON —
Roger Stone, the Republican political operative indicted Friday by the grand jury investigating Russian election interference, is a longtime friend and confidante of President Donald Trump who helped pave the way for the real estate mogul’s unforeseen ascent to the White House.

A self-described “dirty trickster” with a taste for loud suits and colorful language, Stone, 66, has known Trump since the late 1970s when Stone, a young veteran of Richard Nixon’s 1972 re-election team, was campaigning for another Republican candidate, Ronald Reagan, and courting supporters for his campaign in New York.

As Stone recalled in a 2016 interview with PBS’ Frontline program, Trump, a brash real estate developer and a registered Republican at the time, offered to help the campaign even though “he emphasized that he was a businessman, that he wasn’t that political.”

“For those who say he’s not a conservative, he’s not a Republican, he was there in the Reagan revolution,” Stone said.

Stone has remained in Trump’s orbit ever since, by turns serving as a lobbyist, business consultant, and political confidante.

In the 1980s, Trump hired Stone, then a Washington lobbyist, to represent him in the nation’s capital to deal with “a number of small but important issues” involving the businessman’s Atlantic City casinos and other properties.

For his part, Stone, viewing Trump as a larger-than-life figure “who’s got it all” — charisma, wealth, standing — pressed Trump to run for president.

In 1988, as Reagan’s second term was winding down, Stone arranged for Trump to travel to New Hampshire, site of the nation’s first presidential primary, to address a crowd of 2,000 well-wishers. Trump liked the “publicity” and the “notoriety” but was not “serious about running,” Stone recalled in the interview.

Trump made a more serious albeit ultimately unsuccessful run for the White House in 2000, but it wasn’t until Trump declared his candidacy for president in 2015 that Stone began to see his decadeslong push to put Trump in the White House within reach.

Stone joined his friend’s long-shot campaign early on in 2015 but left shortly thereafter for reasons that remain in dispute. The campaign said at the time that Stone had been fired, but Stone maintained that he’d left on his own.

Whatever the case, the parting of ways did not stop Stone from serving as loud cheerleader of Trump’s presidential bid. He set up a super PAC, the Committee to Restore America’s Greatness, paying for a billboard in New York’s Times Square depicting Trump as Superman.

As the campaign shifted into high gear, Stone drew wide scrutiny after WikiLeaks, the anti-secrecy activist group, released thousands of emails hacked from the Democratic National Committee and the campaign of Democratic candidate Hillary Clinton. Prosecutors say Russian military intelligence agents hacked the emails and then funneled them to WikiLeaks as part of Moscow’s effort to disrupt the election.

In an August tweet, Stone wrote, “Trust me, it will soon [be] Podesta’s time in the barrel. #CrookedHillary.” In October, WikiLeaks released thousands of emails hacked from Podesta’s Gmail account…

Stone has long denied advance knowledge of the email release.

In September 2017, he appeared before the House Intelligence Committee, testifying that he had no direct contact with WikiLeaks during the campaign, did not direct anyone to contact WikiLeaks, and that he did not discuss his conversations with an intermediary to WikiLeaks with the Trump campaign.

But prosecutors say those statements were all false. Stone, they say, was in close contact with the Trump campaign as he was trying to find out when WikiLeaks was planning to publish its next batch of damaging emails and documents about the Clinton campaign.

After WikiLeaks released its first batch of the Podesta emails on Oct. 7, an associate of a senior Trump campaign official sent a text message to Stone that read “well done,” according to the indictment.

Stone was arrested by FBI agents at his home in Fort Lauderdale, Florida, early Friday after a grand jury in Washington handed down an indictment, charging him with five counts of making false statements, one count of obstruction of a legal proceeding, and one count of witness tampering.

According to the indictment, not only did Stone lie to Congress about his interactions with WikiLeaks and the Trump campaign, but he also tried to prevent an associate, Randy Credico, from providing testimony to Congress that would contradict Stone’s version of events“. https://www.voanews.com/a/who-is-roger-stone/4759864.html