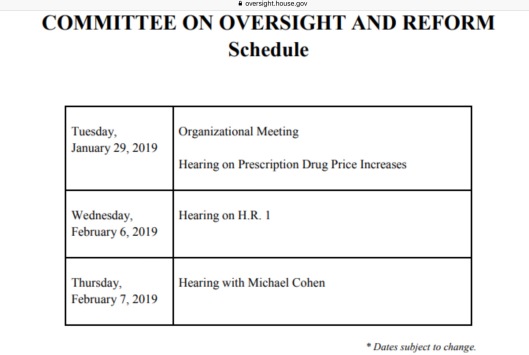 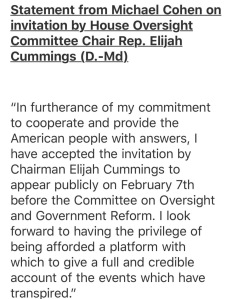 “Chairman Cummings Announces Oversight Committee Hearing Schedule Jan 10, 2019 Press Release Washington, D.C. (Jan. 10, 2019)—Today, Rep. Elijah E. Cummings, the Chairman of the Committee on Oversight and Reform, announced the schedule for Committee hearings in January and February and issued the following statement:
“Last November, the American people voted overwhelmingly for Congress to do two things—address the core issues that affect their daily lives, and fulfill our Constitutional responsibility to serve as an independent check and balance on the Executive Branch by restoring accountability and transparency.  This initial set of hearings will serve both goals by launching our broad review of the skyrocketing prices of prescription drugs, hearing directly from President Trump’s longtime personal attorney, and focusing on sweeping legislative reforms to strengthen our democracy in H.R. 1.”

Chairman Cummings also made the following statement on the upcoming hearing with Michael Cohen:
“I thank Michael Cohen for agreeing to testify before the Oversight Committee voluntarily.  I want to make clear that we have no interest in inappropriately interfering with any ongoing criminal investigations, and to that end, we are in the process of consulting with Special Counsel Mueller’s office.  The Committee will announce additional information in the coming weeks.”

Michael Cohen should be able to tie all the pieces together, if they haven’t been tied together already. He can corroborate other evidence: https://miningawareness.wordpress.com/2018/05/26/russian-oligarch-and-cousin-meet-trump-lawyer-michael-cohen-at-trump-tower-days-before-trump-inauguration-prior-to-1-million-contract/