This blog posts as UTC, so this was posted when it was still Jan. 9th in the United States. Comment here till Wednesday, January 9, 2019, 1159 pm Eastern Time (DC, NYC, etc); and 859 pm in Washington State: https://www.regulations.gov/document?D=DOE_FRDOC_0001-3696 Feel free to submit a comment late, if need be, via the email address given at the link. However, comment on time if you can. Late comments may not officially count.

The Washington below is Washington State. If it were Washington DC, you can be certain that it would be handled correctly. For the US Government and contractors, “cheaper” just means more cheaply done so that contractors make more profits, and it is an effort to reduce liability, including for previous substandard, shoddy, work.

It is impossible to consult with wildlife and future generations. The best standard possible must be required.

Excerpted from the letter submitted to the US DOE by Washington State Governor Jay Inslee and Washington State Attorney General Bob Ferguson:
“We write in strong opposition to the U.S. Department of Energy’s (DOE) proposal to change the interpretation of “high level waste.”…
Washington currently holds sixty percent of the nation’s high level waste with 56 million gallons stored in 177 underground storage tanks at Hanford. DOE has a responsibility to Washington communities and tribes to cleanup their nuclear site in the safest way possible. We have strong concerns with any proposal that will allow DOE to unilaterally reclassify high level waste to low level waste without input or consent from those most impacted…
we have heard DOE officials indicate that the new high level waste interpretation is a way to change current cleanup plans in order to reduce costs. At Hanford, this can only mean one thing: a cleanup that provides less protection for workers and nearby residents from the harmful chemicals and long-lived radionuclides in Hanford’s high level waste. This will inevitably involve DOE proposals to leave waste in tanks and walk away, leaving the Columbia River and the surrounding community with unacceptable levels of risk…
We urge you to abandon the current proposal to alter the longstanding interpretation of the term “high level waste.” Washington stands ready to engage with you in a meaningful dialogue, but will oppose this kind of broad-based unilateral attempt to change the landscape of nuclear cleanup and threaten our communities.” https://www.governor.wa.gov/sites/default/files/Gov-AG-DOE-LtrCommentsRe_InterpretationofHighLevelWaste.pdf

This photo from WIPP demonstrates how the US currently handles nuclear waste. The standards must be strengthened, not further weakened. 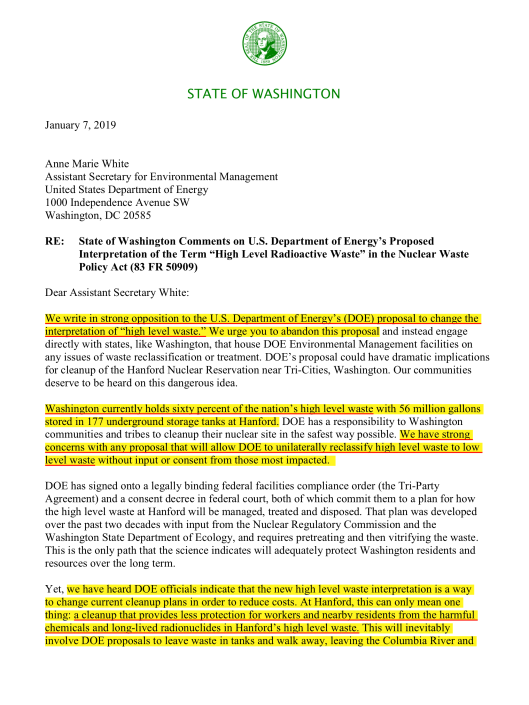