US Border Patrol On Horseback
It turns out that the most common methods for transporting illegal drugs would bypass Trump’s wall. They are most commonly concealed in vehicles and tunnels under the border are also used. The most logical control method would be passive detection often used for border control on the European continent. 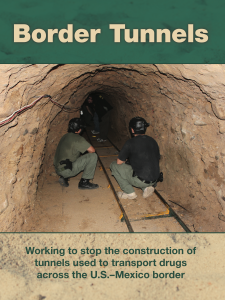 Apparently not much has changed since the old movie “El Norte”. Note the passage by truck and passage through a drain pipe (tunnel) in the movie trailer: http://youtu.be/jPoqBCvyG9k

Both common sense, and the information below, suggest that the passive sensors, often used in border control on the European continent, are the most logical. A passive sensor could not be scouted out by the unmanned aerial vehicles/drones discussed below, for instance.

Excerpted from: “Statement of Paul E. Knierim Deputy Chief of Operations, Office of Global Enforcement Drug Enforcement Administration Before the Subcommittee on Border Security and Immigration United States Senate December 12, 2018“: “Mexican TCOs transport the majority of illicit drugs into the United States across the SWB using a wide array of smuggling techniques. The most common method employed by these TCOs involves transporting illicit drugs through U.S. Ports of Entry (POEs) in passenger vehicles with concealed compartments or commingled with legitimate goods on tractor trailers.

Other cross-border smuggling techniques employed by Mexican TCOs include the use of subterranean tunnels, which originate in Mexico and lead into safe-houses on the U.S. side of the border. Underground tunnels are mainly used to smuggle ton quantities of marijuana, although there are instances of other illicit drugs commingled in shipments. Tunnels seized and destroyed by U.S. law enforcement authorities along the SWB are primarily found in California and Arizona, and are generally associated with the Sinaloa Cartel. Mexican TCOs also transport illicit drugs to the United States aboard commercial cargo trains and passenger buses. To a lesser extent, Mexican TCOs use maritime vessels off the coast of California. Mexican TCOs also rely on traditional drug smuggling methods, such as the use of backpackers, or “mules,” on clandestine land trails to cross remote areas of the SWB into the United States.

Mexican TCOs exploit various aerial methods to transport illicit drugs across the SWB. These methods include the use of ultralight aircraft and unmanned aerial systems (UASs) and drones to conduct air drops. Ultralights are primarily used to transport marijuana shipments, depositing the drugs in close proximity to the SWB. Currently, UASs can only convey small multi-kilogram amounts of illicit drugs at a time and are therefore not commonly used, though there is potential for increased growth and use. Mexican TCOs also use UASs to monitor the activity of U.S. law enforcement along the SWB to identify cross-border vulnerabilities.

Drug-related murders in Mexico continue to reach epidemic proportions. U.S.-based Mexican TCO members, however, generally refrain from inter-cartel violence so as to avoid law enforcement detection and scrutiny, resulting in little spillover violence in the United States. Mexican TCO-related acts of violence do occur in parts of the United States, particularly along the SWB; however, they are less frequent and mainly associated with ‘trafficker-on-trafficker’ incidents…

Illicit drugs distributed by the Sinaloa Cartel are primarily smuggled into the United States through crossing points located along Mexico’s border with California, Arizona, New Mexico, and West Texas…

Due to its influence over areas in northeast Mexico, the Gulf Cartel smuggles a majority of its drug shipments into South Texas through the border region between the Rio Grande Valley and South Padre Island. The Gulf Cartel maintains a presence in Atlanta, and holds key distribution hubs in Houston and Detroit…

MONEY LAUNDERING
… Most bulk currency smuggled into California from other states is assessed to be suspected payments for drug shipments. The majority of bulk currency is moved from Northern California to Southern California and eventually transported across the border into Mexico using privately-owned vehicles as well as commercial tractor trailers. Large amounts of cash continue to be interdicted along major highway corridors, with the cash typically concealed in hidden vehicle compartments or among legitimate cargo. Los Angeles remains a haven for drug trafficking organizations to launder their proceeds due to the numerous banks, businesses with ties to Mexico, and check cashing centers present in the area.

International airports throughout California are also significant transit points for traffickers smuggling bulk cash derived from drug sales. In these instances, cash can be found in checked or carry-on bags, either loose or in plastic heat or vacuum sealed bags, or else concealed on the passenger’s person. In addition, numerous undeclared quantities of cash are detected at mail facilities within shipping boxes originating from other U.S. locations. These boxes, sometimes supplied by the mail service or delivery businesses, are then shipped via ground and air to destinations in California…

Aside from Asian Money Laundering Organizations (MLOs), other TCO networks maintain the capability across multiple states and jurisdictions to buy and sell commodities or services in the United States that assist in the movement of illicit proceeds in and through the United States. Federal, state, local, tribal, and territorial agencies routinely recover billions of dollars of illicit proceeds annually, a portion of which is attributable to TCOs. One example, from June 2017, 11 individuals were charged with laundering more than $40 million in drug proceeds on behalf of Mexican TCOs. In exchange for kickbacks, managers and employees of a number of Atlanta-area money remitters reportedly laundered purported drug proceeds to Mexico by breaking the transactions into thousands of smaller transactions and by listing fake sender information. Several of the money remitters allegedly served as the Bank Secrecy/Anti-Money Laundering Compliance Officers for their respective stores and were responsible for detecting and reporting these types of illicit financial transactions…. ” Read the entire document here: https://www.justice.gov/sites/default/files/testimonies/witnesses/attachments/2018/12/20/narcos_transnational_cartels_border_security.pdf

Other organized groups are involved, including Russian groups.