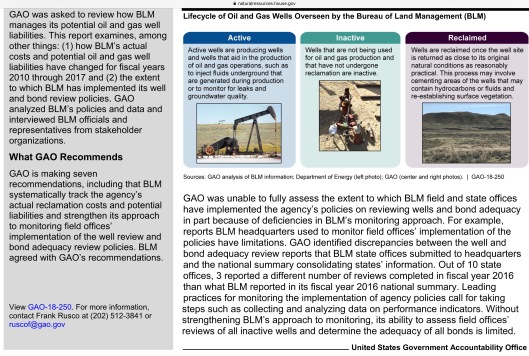 “06.05.18
Grijalva Highlights GAO Report Showing Unknown Taxpayer Costs for Oil and Gas Operations, Need for Updated Rules Washington, D.C. – Ranking Member Raúl M. Grijalva (D-Ariz.) highlighted the release this morning of a new Government Accountability Office (GAO) report that finds the Bureau of Land Management (BLM) cannot accurately account for taxpayer cleanup risks at orphaned onshore oil and gas wells. The report, Bureau of Land Management Needs to Improve Its Data and Oversight of Its Potential Liabilities, finds a striking lack of data tracking across the agency on the public costs of orphaned wells, which have grown in number since GAO last examined the issue in 2010.

The report, available at http://bit.ly/2LnW3kL, comes just one day before an Energy and Mineral Resources Subcommittee hearing on four Republican-authored onshore “energy development” bills. It finds that even with the noted data gaps, the cost to taxpayers seems to have gone up considerably since 2010, the last time the agency studied the issue.

The watchdog writes in the report that BLM does not even have the necessary data systems to know how much orphaned well reclamation is costing the public: “BLM headquarters officials we interviewed told us that they did not have any information on actual costs incurred to reclaim orphaned wells and stated that BLM’s data systems were not designed to track incurred reclamation costs.”

The report, Grijalva says, highlights the need both for better industry regulation, such as an end to industry financial self-bonding, and for better BLM data tracking methods.

GAO spoke to BLM officers at 13 of the agency’s 33 field offices. The report states that BLM employees at those offices alone “identified about $46.2 million in estimated potential reclamation costs associated with orphaned wells and inactive wells that officials deemed to be at risk of becoming orphaned.” The problem of orphaned wells has become much more acute since 2010, as the report notes:

Based on GAO’s analysis of data obtained from 13 of BLM’s 33 field offices that manage oil and gas programs, the average annual reclamation cost was $267,600, an increase compared to the $171,500 annual average across all BLM offices that GAO reported in 2010. Similarly, GAO’s analysis of BLM data found that the number of known orphaned wells, those that generally have no responsible or liable parties, for all field offices has increased from 144 in 2010 to 219 as of 2017.

“Oil and gas drillers shouldn’t be able to pass their cleanup costs on to the public,” Grijalva said. “Despite what Republicans keep telling us, the fossil fuel industry isn’t being regulated into the ground. Too often, it’s freeloading off the American people, and this report tells us we don’t even know how much it’s costing us. It’s time to fix these data gaps and make sure this walkaway culture ends once and for all.”

Bill West, a rancher who lives near Arvada, Wyo., said the findings track closely with the problems he and his neighbors have experienced in recent years. West is a member of the Powder River Basin Resource Council and Western Organization of Resource Councils.

“We have close to 100 wells on our place, and none of them have been reclaimed yet,” West said. “High Plains Gas went bankrupt and left several thousand wells in Wyoming. The state is paying to clean up the private and state-owned wells, but BLM didn’t have enough in bonds to cover the cost of reclaiming the federal wells. It’s high time the federal government required adequate reclamation bonds to cover cleanup costs, which would prevent the problem in the first place.” https://naturalresources.house.gov/media/press-releases/grijalva-highlights-gao-report-showing-unknown-taxpayer-costs-for-oil-and-gas-operations-need-for-updated-rules
The top image is excerpted from the GAO report.