When the majority of white Mississippians get their comeuppance for supporting Trump and Hyde-Smith be ready to laugh. It’s going to be funny.

It’s going to be funny when they get called “Dumb Southerners”, and “Retarded” like Trump reportedly called Jeff Sessions!

When Trump spits out the Mississippi delegation, it will probably make Trump’s insults of Jeff Sessions sound meek and mild.

Mississippi Governor Phil Bryant should be under investigation by the Mueller team due to his Brexit Boy connections, alone, if they are doing their jobs. Hyde-Smith, appointed by Governor Bryant, and supported by Haley Barbour may be implicated. And, Senator Wicker, appointed by then Governor Haley Barbour, whose BGR Group has long worked for Russian oligarchs (Alfa Bank-LetterOne), and even for Russia in the Uranium One case, may be implicated. Perhaps another “special election” is coming to Mississippi soon? https://miningawareness.wordpress.com/2018/10/02/trump-stumpin-today-for-interim-senator-appointed-by-governor-with-weird-russian-brexit-connections/

Meanwhile, the FBI will have up to two years to examine some strange things – like Hyde-Smith’s assistant giving her 75% of his pre-tax salary in campaign donations, before he became her assistant. Was that his money? If so, did he know, in advance, that she would win? If not, whose money?
“Hyde-Smith’s “Special Assistant” Umesh Sanjanwala Seems To Have “Bought” His Job For A $57,077 Campaign Donation To Hyde-Smith In 2011 (75% Of His Salary At The Time) ” https://miningawareness.wordpress.com/2018/11/25/hyde-smiths-special-assistant-umesh-sanjawala-seems-to-have-bought-his-job-for-a-57077-campaign-donation-to-hyde-smith-in-2011-75-of-his-salary-at-the-time/

“Jeff Sessions’ Southern drawl: These days, the attorney general can’t even enunciate to the president’s satisfaction“, by Robert Hill https://www.post-gazette.com/opinion/Op-Ed/2018/09/10/Jeff-Sessions-Southern-drawl/stories/201809070008

“Mississippi Senate Election Results: Cindy Hyde-Smith vs. Mike Espy” – The New York Times: Hyde-Smith 54% vs Espy 46%. You can see which counties and areas went for which candidates on the map. Counties and regions going for Espy appear to systematically be those with high percentages of African Americans. https://www.nytimes.com/interactive/2018/11/27/us/elections/results-mississippi-senate-runoff-special-election.html As the population of Mississippi is only 38% African American, there appears to have been some percentage of whites who voted for Espy. We don’t know the demographics of the turnout. And, we aren’t sure how Hispanics and Asians would vote, but most likely they are/lean Republican.

Do they not teach Mississippi history in the All White Academies?
Alabama was part of Mississippi territory. 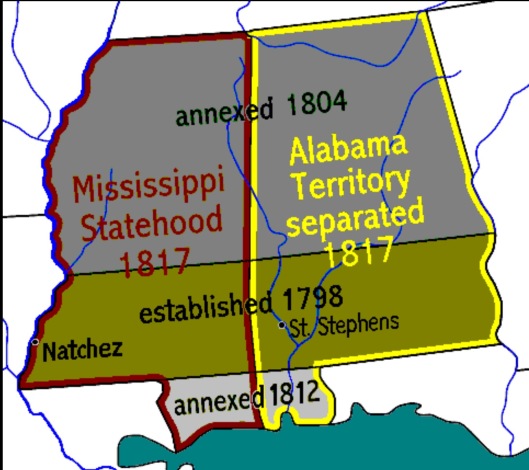 And, will the FBI hurry up and investigate if Umesh Sanjanwala really spent 75% of his pre-tax salary as a campaign donation to Hyde-Smith? Or is it someone else’s money?

Was he sure that she would win? How? Maybe because the Miss Secretary of State, also a supporter of Hyde-Smith, told him? Umesh Sanjanwala graduated from high school in the Vicksburg area. The Sec. of State is from Vicksburg. Since Hyde-Smith became Senator and he works as State office director, Umesh’s daughter is now teaching adjunct at Ole Miss with a one year MBA (so very not normal). MBA’s are generally two years, but Millsaps says it can be done in one – sounds like a cheapened MBA, especially since she was supposedly working full time. Plus, due to so many immigrants from India and elsewhere coming to America and doing Ph.D.s with hopes of staying, the value of the Ph.D. has declined, as has the quality. Most Ph.D.s teach adjunct, if at all. Basic economics – too many Ph.D.s and the market value goes down. So, how is Umesh’s daughter suddenly teaching at the University of Mississippi (Ole Miss) with only a one year MBA?

Coincidence that Haley Barbour’s BGR group has long represented India, as well as Russian oligarchs, Saudi Arabia (until the other day), etc.?

Waiting for the investigative journalists and FBI to address this:
“Hyde-Smith’s “Special Assistant” Umesh Sanjanwala Seems To Have “Bought” His Job For A $57,077 Campaign Donation To Hyde-Smith In 2011 (75% Of His Salary At The Time) “. https://miningawareness.wordpress.com/2018/11/25/hyde-smiths-special-assistant-umesh-sanjawala-seems-to-have-bought-his-job-for-a-57077-campaign-donation-to-hyde-smith-in-2011-75-of-his-salary-at-the-time/