Cindy Hyde-Smith did indeed graduate high school from a private “All-White Academy”, also known as a “Segregationist Academy”. Someone did a good job of hiding this fact, but finally we found it. These schools sprang up all over Mississippi in the late 1960s – 1970 to avoid integration. 1970 is the first year that Mississippi schools were integrated starting in first grade. Although we suspected which one it was, we could find nothing until today. She graduated from the private Lawrence County Academy in Monticello, Mississippi. Then she attended Copiah Lincoln Community College (Co-Lin) and the University of Southern Mississippi. See: https://archive.org/stream/colinian2012unse/colinian2012unse_djvu.txt

When she served in the Mississippi legislature, she tried to get part of Highway 51 renamed Jefferson Davis Highway, after the President of the Confederacy. She was appointed as interim US Senator by Mississippi Governor Bryant, who is a member of Sons of Confederate Veterans. He was given an award by them this year. So, why would anyone be surprised that she has pictures in a Confederate hat with a rifle at his museum home of Beauvoir, saying “Mississippi history at its best“? Beauvoir is in Biloxi, Mississippi, where Trump will hold a Hyde-Smith Rally within the next week. Now his choice of location suddenly makes sense! Governor Bryant is also connected to Russia through the British Brexit Boys.

Additionally on November 18th, it was reported that her husband, Michael Smith, is indeed kin to one of the men arrested (Mack Smith) in the shooting of the black voting rights activist, on the Brookhaven courthouse lawn in 1955 (as also suspected). The alleged shooter, Noah Smith, who left the scene covered with blood, is reportedly buried at Macedonia Baptist Church, which she and her husband attend.

Update: Out of 395 non-pre-K students at Brookhaven Academy, only 1 is black, whereas 5 are Asian. It is 98% white. (There are 33 pre-K students, ethnicity not given). This does not reflect the demographics of Mississippi, which is 38% black and 1.1% Asian: https://nces.ed.gov/surveys/pss/privateschoolsearch/school_detail.asp?Search=1&Zip=39601&Miles=10&ID=00736196

There were two cross burnings on one night alone in April 1964, in Monticello, where Cindy Hyde-Smith grew up. She was 5 years old. In 1964, there was also a major klan meeting in nearby Brookhaven, where she currently lives and her husband is apparently from. 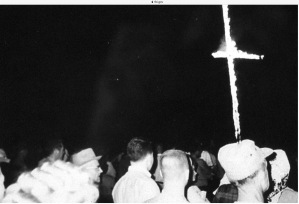 Her husband, Michael Smith, appears to be a Nazi-like figure, because he had a reporter’s phone searched because he didn’t want video taken of his livestock auction! Since she’s a Southern Baptist and must submit to her husband’s will, he’s the one that will be de facto US Senator, though she’s apparently happy to submit to Phil Bryant, Wicker and Trump’s will.

Cindy Hyde-Smith and husband Michael Smith own and operate the Lincoln County sale barn (i.e. livestock auction). “Mississippi Today” reporter Adam Ganucheau had his phone searched to make sure he hadn’t taken video of the auction. He was searched by a relative-employee of Michael Smith. In the same article, Ganucheau reports that in the Mississippi State Senate, in 2001, Hyde-Smith “introduced legislation to name a portion of Highway 51” for the President of the Confederacy, Jefferson Davis. See: “‘Public hanging’ comment creates a stir in Hyde-Smith’s hometown as race emerges as key issue in Senate runoff” BY ADAM GANUCHEAU h NOVEMBER 14, 2018 “Mississippi Today” https://archive.is/Um59y While Adam Ganucheau is doing a great job, it’s important to be aware that the BGR group’s Haley Barbour is listed as Mississippi Today donor starting from 2016.

Will Bunch wrote on November 18th: “The filmmaker Beauchamp told me he’s found loose family ties between Hyde-Smith’s in-laws and key players in the segregation fight — that his research shows husband Michael Smith is related to 1955 arrestee Mack Smith and that Michael Smith’s sister married the grandson of segregationist judge Tom Brady. None of that is surprising, perhaps, in such a close-knit community. The alleged killer Noah Smith died in 1975 and was buried in Macedonia Baptist Church, the same church where Cindy Hyde-Smith has been a Sunday school teacher.” See: “Why the blood of a 1955 Mississippi murder drenches today’s U.S. Senate race“, by Will Bunch Posted: November 18, 2018 – 1:56 PM. http://web.archive.org/web/20181119000626/http://www2.philly.com/philly/columnists/will_bunch/cindy-hyde-smith-mississippi-senate-race-mike-espy-lamar-smith-1955-murder-20181118.html

Mississippi Governor Phil Bryant gave the high school graduation speech at Brookhaven Academy in 2017. According to the Daily Leader, this was a graduation present for Anna-Michael Smith, daughter of Cindy Hyde Smith. See: “Governor to speak at BA graduation“, By Donna Campbell, May 9, 2017, Daily Leader

“White Masculinity in the Recent South“, by Trent Watts , 2008, includes “Brookhaven Academy, founded in 1970” as one of Mississippi’s segregation academies.

“A source advised that on February 15, 1964, approximately
200 members of the Original Knights of the Ku Klux Klan (OKKKK)
from the State of Mississippi met at Brookhaven, Mississippi.

Those present decided to defect from the OKKKK and to form their
own klan group in’ Mississippi to be known as the White Knights of
the Ku Klux Klan of Mississippi.

This source advised that the aims and purposes of the
White Knights of the Ku Klux Klan of Mississippi are to preserve
Christian civilization, protect and promote white supremacy and
the segregation of the races, to fight communism and to extend
the dignity, heritage, Aqd rights of the white race of America. ”
https://archive.org/stream/WKKKKOM/5587107%20–%20Plans%20of%20Klan%20Groups%20to%20Infiltrate%20Law%20Enforcement%20Agencies_djvu.txt

“NO T-3 advised on April 24, 1964, that special meetings
of each Klavern of the WKKKK OM have been called for the evening
of June 24, 1964, where each Klavern is to assemble at their
respective meeting places. The purpose of these meetings is to
formulate plans to burn crosses on the evening of April 24, 1964,
in the territories covered by each Klavern in the state of
Mississippi. On April 25, 1964, Inspector A. D. MORGAN, Duty Officer,
Mississippi Highway Safety Patrol, Jackson, Mississippi, advised
that as of 4:00 PM on April 25, 1964, his agency had received
reports of cross burnings in the following areas of Mississippi:
1 – Poplarville, Mississippi
2 – Monticello, Mississippi ….” The rest are found here:
https://archive.org/stream/WKKKKOM/5587107%20–%20Plans%20of%20Klan%20Groups%20to%20Infiltrate%20Law%20Enforcement%20Agencies_djvu.txt (The original says June, but they apparently meant April).