2014: President Obama’s Under Secretary of the Army with US troops in the rain. 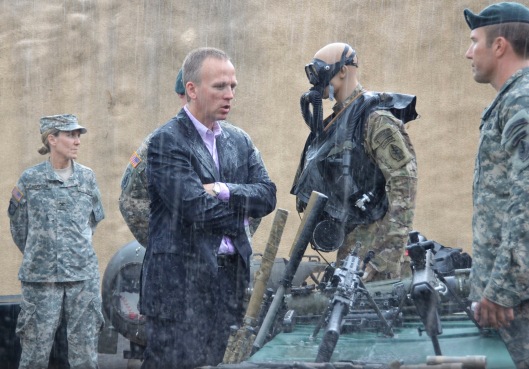 In the US, 2014: “UnderSec Visits USASOC FORT BRAGG, N.C. — The Under Secretary of the Army, Hon. Brad Carson, discusses weapons systems with a Special Forces Soldier during a walkthrough on Range 37, Fort Bragg. Hon. Carson met with USASOC Soldiers to gain firsthand knowledge of Army Special Operations Forces and their capabilities. (Photo Credit: Sgt. Daniel A. Carter, USASOC Public Affairs)”

The French Army twitter account Armée de Terre @armeedeterre thanked its fans for sharing “raining Monday motivation“. However, they deny trolling Trump’s refusal to go to out in the rain for World War I Armistice Day ceremonies in France, noting that their routine activities just happened to take place while it’s raining (as must be the case much of the time!).

A French Armée de Terre @armeedeterre ‪#MondayMotivation, 10:09 AM, November 12, 2018, tweet said “There’s rain, but it’s no big deal [not serious]. We remain motivated”, and shows a soldier crawling through the rain. At 10.15 PM, ‬they wrote “Sorry to those who believed that they interpreted it [the tweet], but no allusion was to be found behind this habitual activity of soldiers in the ground forces which, this morning, was carried out in the rain!”

How dare Trump give himself airs about the US and World War I! Trump tweeted (Nov 13, 2018): “They were starting to learn German in Paris before the U.S. came along.” Trump’s mother was still in the UK, with his grandfather too old to fight. His draft-dodging German grandfather, who ran apparent brothels for miners in western North America, was deported in 1905 from the Kingdom of Bavaria (now Rhineland-Palatinate, Germany) when he tried to return, because he was a draft dodger. He was just barely too old to be mobilized by the US in World War I and died of the flu in 1918 instead.

“Days after visit, Trump blasts France’s Macron as relations sour
Posted:Tue, 13 Nov 2018 17:17:03 -0500 U.S. President Donald Trump attacked his French counterpart on Tuesday in a series of tweets that underscored how much the once-friendly ties between the two leaders have soured, just two days after returning from Paris.” http://feeds.reuters.com/~r/Reuters/PoliticsNews/~3/-dWmglfZQ58/days-after-visit-trump-blasts-frances-macron-as-relations-sour-idUSKCN1NI1NW

What did Trump really do when he refused to go to the cemetery to honor the WWI American dead? https://miningawareness.wordpress.com/2018/11/12/as-netanyahu-cuts-short-paris-trip-additional-questions-are-raised-about-trumps-fear-of-rain/

Trump appears to have either had other things planned – perhaps meetings with Putin and/or Netanyahu, or shopping with Melania – or he was embarrassed by public outcry into going to another World War I cemetery the following day, despite apparent rain, as the camera lens appears wet. And, there is a copyrighted picture of him standing with an umbrella. 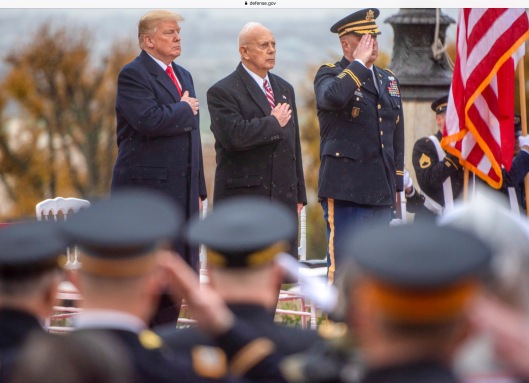 Trump during a Veterans Day observance at the Suresnes American Cemetery, Suresnes, France, Nov. 11, 2018. The service also marked the 100th anniversary of the signing of the armistice ending World War I. Photo By: Navy Petty Officer 1st Class Dominique A. Pineiro

French translation of the tweets our own. All translations are only translations, which are effectively interpretations. The French original is the only original.