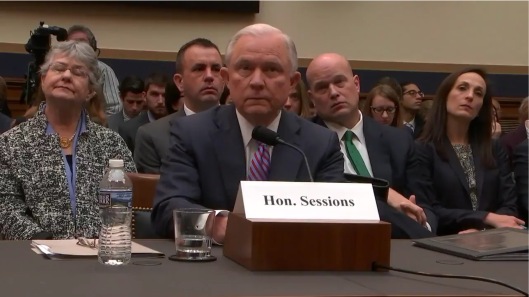 US Congressman Nadler grilling Jeff Sessions on 14 Nov 2017; the thuggish looking individual to the right (with the green tie) seems to be Whitaker.

Speaking with reporters outside the White House, the president said, “I don’t know Matt Whitaker,” but also said the 49-year-old former U.S. attorney from Iowa is “highly respected” among law enforcement officials.

William Gustoff, who co-founded a law firm with Whitaker and remains in contact with the acting attorney general, said Trump’s comment may simply mean that the two don’t know each other “intimately.”

Friends and associates of Whitaker, however, say the former Iowa college football star has forged a close working relationship with Trump since joining the Department of Justice (DOJ) last fall as chief of staff to then-Attorney General Jeff Sessions.

The relationship developed as Whitaker began accompanying Sessions to White House meetings after Whitaker joined the DOJ from the Foundation for Accountability and Civic Trust (FACT), a conservative ethics watchdog that has filed complaints against Democratic politicians.

Just how many times Whitaker and Trump have met remains unclear.
Charles Larson, a former chairman of the Iowa Republican Party, said Whitaker has briefed Trump and done “an impressive job.”

“My observation is that Matt has a very strong relationship with the president, and this comes with conversations I’ve had with friends and others that work in the administration,” added Larson, who also served as U.S. ambassador to Latvia under former President George W. Bush.

Trump’s choice of Whitaker to take the helm of the Justice Department and oversee special counsel Robert Mueller’s investigation of Russian meddling in the 2016 presidential election sparked a pushback from congressional Democrats and even some prominent Republicans.

On Friday, however, Trump seemed to distance himself from Whitaker, leaving the acting attorney general’s future in doubt.

The president’s assertion directly contradicts what he told Fox News last month, when he said, “I mean, I know Matt Whitaker” and that he is “a great guy.” CNN also reported that Whitaker has visited the White House a dozen or more times since becoming Sessions’ chief of staff and that he had a good relationship with the president.

The White House doesn’t release lists of visitors. A Justice Department spokeswoman did not respond to questions about the number of times Whitaker has met with and briefed Trump….

Whitaker’s appointment came Wednesday, shortly after Trump forced out Sessions after months of complaining about the attorney general’s decision, just weeks into taking office, to recuse himself from oversight of the Russia probe. Trump blamed the recusal for Mueller’s appointment.

Because Sessions had recused himself, Deputy Attorney General Rod Rosenstein supervised Mueller’s investigation. Now, the task has fallen to Whitaker, and Democrats are demanding that he, too, should recuse himself because of his past criticism of the Mueller investigation.

Whitaker was appointed under the Federal Vacancies Reform Act, a 1998 law that allows the president to appoint any senior official as acting head of an agency for up to 210 days. But some constitutional scholars have questioned the legality of the appointment, citing a constitutional requirement that the attorney general must be approved by the Senate.

Brenna Bird, a county prosecutor in Iowa who worked at Whitaker’s former law firm, said Whitaker, along with Sessions, briefed the president “several times” and that Whitaker has gained Trump’s trust.

“Obviously, the president has a great deal of trust in him (Whitaker) to put him in charge at this time,” Bird said. “I don’t think President Trump would choose him for this job if he didn’t think he was up to it, and he is.” https://www.voanews.com/a/friends-acting-ag-whitaker-has-close-relationship-with-trump-/4652758.html