Why is there no uproar about cancer causing pollution, especially radioactive materials, discharged into the environment? Trump’s EPA has but worsened the situation, and is trying to make it worse still. Already, twenty times more Americans die per year from cancer than from gun violence. Trump’s toxic legacy will be seen in the coming decades. 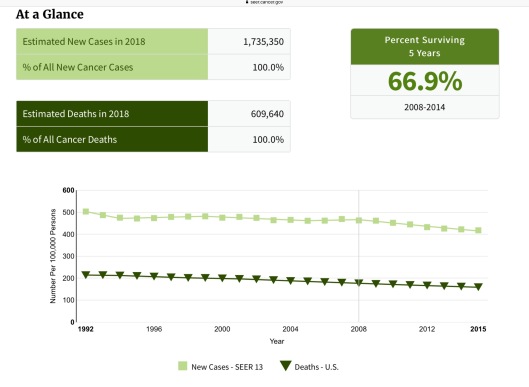 What is surprising about this chart is that the majority of US households do not own guns.

“California bar shooting: At least 12 killed in Thousand Oaks
The bar in Thousand Oaks, California was packed with college students when the gunman opened fire.” https://www.aljazeera.com/news/2018/11/multiple-injuries-mass-shooting-california-bar-authorities-181108082412734.html

According to the US National Nuclear Lab at Los Alamos:
“Cancer is a gross distortion of cell behavior caused by numerous gene mutations and numerous abnormalities in the production and functioning of proteins…

A substantial body of evidence now suggests that cancer initiates from a single cell that has been transformed due to a particular change in its DNA. Some event, such as exposure to radiation… creates a change in the genome. This may be a DNA mutation, or an epigenetic modification. Then, either through direct action or indirectly through a complex web of interacting proteins, the mutation changes the overall expression of some of the cell’s genes. The cell continues to function, albeit slightly differently. Typically, the initial behavioral modification may be difficult to detect, but the functional change is passed on to future cell generations…” (p. 74) Los Alamos Science Number 23 1995, “Radiation, Cell Cycle, and Cancer” http://library.lanl.gov/cgi-bin/getfile?23-02.pdf