US Congresswoman-Elect Deb Haaland and Sharice Davids will be the two first Native American/American Indian women to serve in the US Congress. They are both going to Washington early next year!

Democrats need to learn from US Congresswoman-Elect Deb Haaland of New Mexico:
“Haaland says her most powerful fundraising tool is her telephone. She’s used it to call “thousands and thousands of donors and voters alike, to talk about my campaign.” “I feel confident that folks need to hear directly from me,” she said. “I have called some people who have said, ‘I’ve never, ever been called by a candidate. Thank you for calling me. I’m so happy to hear from you.’ That’s the way I build relationships with people.” (VOA-Julie Taboh) 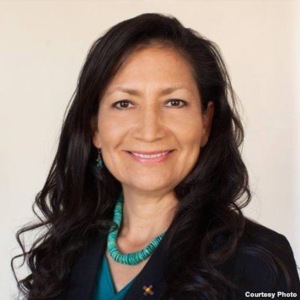 Excerpt from VOA news:
“Women Candidates Need Ingenuity to Fund Political Campaigns
November 02, 2018 6:02 AM, by Julie Taboh
ALBUQUERQUE, NEW MEXICO —
Debra Haaland is running for Congress.
She’s among a record number of American women who are running — or running again — for political office at all levels of government in Tuesday’s midterm election. Most of those candidates are Democrats, and they are receiving the lion’s share of campaign contributions. But female candidates from both parties have found that they have a harder time raising money than men. Consequently, they have had to be innovative and creative in fundraising.

Haaland is the Democratic nominee in New Mexico’s 1st Congressional District, located in the north-central area of the state. She is a member of the Laguna Pueblo, hoping to make history as the first Native American woman in Congress.

While she’s been actively involved in Democratic politics for more than two decades, including service as the New Mexico state Democratic Party chair, this is the first time she is running for public office. And she is favored to win.

Haaland entered the race fully aware that running a campaign takes money.
“When you first start a campaign for Congress, it’s like a series of concentric circles,” she explained in an interview with VOA. “So, I started with my friends and family, those are people that know me and trust me, and then you graduate to acquaintances, people you went to school with, people that you’ve known through work. And so, that’s how I initially got started.”

That was in 2017. Haaland has been able to meet all her financial goals every quarter since then, thanks to lots of small grassroots contributions.

“I have a lot of donors who will donate $3, $5, $10 apiece,” she said.
Those donations come in through the internet, regular mail and at fundraising events such as private dinners hosted by friends and supporters in their homes.

Her opponent, Republican Janice Arnold-Jones, received $282,471 in contributions through Oct.17.

Much of Haaland’s donations go toward funding the many expenses associated with running a campaign, such as creating and airing television ads, travel, mailings, signs, staff salaries and maintaining her Albuquerque campaign headquarters.

Haaland also has a strong social media presence.
“We’re on Twitter. We’re on Instagram. We’re on Facebook, of course. And then we send out regular emails, and some of those are fundraising emails where we ask people to donate before the end of the quarter,” she said.

Haaland says her most powerful fundraising tool is her telephone. She’s used it to call “thousands and thousands of donors and voters alike, to talk about my campaign.”
“I feel confident that folks need to hear directly from me,” she said. “I have called some people who have said, ‘I’ve never, ever been called by a candidate. Thank you for calling me. I’m so happy to hear from you.’ That’s the way I build relationships with people.”

That includes outreach to the Native American community.
“We decided early on that considering that I would be the first Native American woman in Congress, that I should work hard to engage Indian tribes in my fundraising,” she said. “So, we said we wanted to build a national tribal network from the start.”

Over the past year and a half, Haaland and her team have been reaching out to tribes by attending meetings and working with them in other ways to help her campaign.

While Haaland doesn’t accept money from corporate political action committees, she does accept contributions from Democratic fundraising organizations such as EMILY’s List (an acronym for Early Money Is Like Yeast, meaning it helps raise “dough”) that collect money from individual donors who are interested in a specific issue.

“These [donors to EMILY’s List] are pro-choice voters who want to see more women in office,” said Sarah Bryner, research director for the Center for Responsive Politics, a nonpartisan, nonprofit organization in Washington. “They say, ‘I don’t really care who this money goes to, you guys can decide. I’m going to give you $500, and you distribute it to the candidates that need it the most.’”

She points out that most of the campaign donations to women this year are going to Democrats.
“This particular cycle, we’re seeing the breakdown more along party lines, with Republicans getting less money — Republican women getting practically nothing — and Democrats getting more money from individual donors,” she said….” Read the rest of the article here: https://www.voanews.com/a/women-candidates-need-ingenuity-to-fund-political-campaigns/4639667.html