Republican Senator Roger Wicker, of Mississippi, invested in this major Ponzi scheme. He serves on really important US Senate committees: Committee on Armed Services, Committee on Commerce, Science and Transportation, Committee on Environment and Public Works, Committee on Rules, Commission on Security and Cooperation in Europe.

Wicker is up for re-election. Clearly his Democratic opponent, David Baria, is a safer choice.

These are Wicker’s 2017 investments in the Madison Timber Ponzi scheme. His investments and returns for 2015 and 2016 are found at links further below. 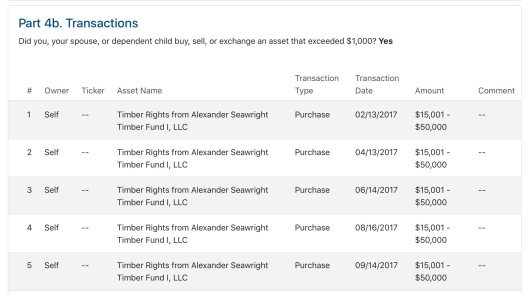 Roger Wicker is serving as a US Senator from Mississippi, and is up for re-election.

Wicker’s investment in this major Ponzi scheme appears poor judgement. Reportedly, it wouldn’t have taken much to check out this investment, especially since it is located in Wicker’s home state of Mississippi. Madison is a well-heeled suburb of the state capital of Jackson. His Senate disclosure forms are not detailed enough to know exactly how much he invested, nor how much he lost, if any. It appears that his wife may have sold a rental property to invest in the Ponzi scheme.

We cannot exclude the possibility, however, that Roger Wicker was somehow involved. Wicker was initially appointed as a replacement to US Senator Trent Lott by then Governor Haley Barbour. Barbour is the B in BGR Group. Barbour is a co-founder of BGR Government Affairs lobbying group.

BGR represented Uranium One in the period of the Russian government takeover, while apparently failing to register as a foreign agent (FARA). BGR Group has long represented Russia’s Alfa Bank (from 2002 to present), owned by several prominent oligarchs, including Mikhail Fridman, as well as German Khan, whose son-in-law was sent to jail for a month in the Mueller investigation. Now they represent Fridman’s Letter One Holdings.

As a Republican operative and lobbyist, Haley Barbour might be dubbed Mississippi’s Manafort, although, to our knowledge, Barbour hasn’t been indicted or convicted of anything – at least not yet – apart from having a loaded gun in his briefcase at airport security, earlier this year.

In short, we cannot exclude the possibility that this Ponzi scheme involved money-laundering, possibly even Russian.

This Ponzi scheme also points to the risks associated with private retirement investment, as opposed to Social Security. Republicans have been gunning for Social Security for years and have wanted to privatize it.

There is a better choice than Wicker: https://www.bariaformississippi.com

Don’t be distracted America! @RogerWicker and his buddies gave tax cuts to the super rich and want to take your healthcare and social security to pay for it. https://t.co/miXvFU0m1N

“What is a Ponzi scheme?
A Ponzi scheme is an investment fraud that involves the payment of purported returns to existing investors from funds contributed by new investors. Ponzi scheme organizers often solicit new investors by promising to invest funds in opportunities claimed to generate high returns with little or no risk. In many Ponzi schemes, the fraudsters focus on attracting new money to make promised payments to earlier-stage investors to create the false appearance that investors are profiting from a legitimate business….

What are some Ponzi scheme “red flags”?
Many Ponzi schemes share common characteristics. Look for these warning signs:
* High investment returns with little or no risk. Every investment carries some degree of risk, and investments yielding higher returns typically involve more risk. Be highly suspicious of any “guaranteed” investment opportunity.
* Overly consistent returns. Investment values tend to go up and down over time, especially those offering potentially high returns. Be suspect of an investment that continues to generate regular, positive returns regardless of overall market conditions….”https://www.sec.gov/fast-answers/answersponzihtm.html

See especially the comments on this article: “TIM-BERRR!” Tuesday, May 1, 2018 http://kingfish1935.blogspot.com/2018/05/another-mississippi-hustle.html

On May 1, 2018 a federal court in Jackson, Mississippi unsealed the Commission’s previously filed fraud charges against a Mississippi company and its principal who allegedly bilked at least 150 investors in an $85 million Ponzi scheme. The defendants agreed to permanent injunctions, an asset freeze, and expedited discovery.

The SEC’s complaint alleges that Arthur Lamar Adams lied to investors by telling them that their money would be used by his company, Madison Timber Properties, LLC, to secure harvest timber rights from various land owners located in Alabama, Florida, and Mississippi, and promised annual returns of 12-15%. But Madison Timber never obtained any harvesting rights. Instead, Adams allegedly forged deeds and cutting agreements as well as documents purportedly reflecting the value of the timber on the land. Adams also allegedly paid early investors with later investors’ funds and convinced investors to roll over their investments. According to the complaint, Adams used investors’ money for personal expenses and to develop an unrelated real estate project.

In a parallel action, the U.S. Attorney’s Office for the Southern District of Mississippi yesterday also announced criminal charges against Adams.

The SEC’s continuing investigation is being conducted by Krysta Cannon and Justin Delfino in the agency’s Atlanta office and is being supervised by Peter Diskin. The SEC’s litigation will be led by Shawn Murnahan and supervised by Graham Loomis, with assistance from Kristi H. Johnson, an Assistant United States Attorney in the civil division of the United States Attorney’s Office from the Southern District of Mississippi. The SEC appreciates the assistance of the U.S. Attorney’s Office for the Southern District of Mississippi and the Federal Bureau of Investigation.”
https://www.sec.gov/litigation/litreleases/2018/lr24129.htm

In December of 2007, then Mississippi Governor Haley Barbour appointed Roger Wicker as an interim replacement for then US Senator Trent Lott. https://www.c-span.org/video/?203285-1/appointment-mississippi-senate-seat

More details on “What are some Ponzi scheme “red flags”?
Many Ponzi schemes share common characteristics. Look for these warning signs:
* High investment returns with little or no risk. Every investment carries some degree of risk, and investments yielding higher returns typically involve more risk. Be highly suspicious of any “guaranteed” investment opportunity.
* Overly consistent returns. Investment values tend to go up and down over time, especially those offering potentially high returns. Be suspect of an investment that continues to generate regular, positive returns regardless of overall market conditions.
* Unregistered investments. Ponzi schemes typically involve investments that have not been registered with the SEC or with state regulators. Registration is important because it provides investors with access to key information about the company’s management, products, services, and finances.
* Unlicensed sellers. Federal and state securities laws require investment professionals and their firms to be licensed or registered. Most Ponzi schemes involve unlicensed individuals or unregistered firms.
* Secretive and/or complex strategies. Avoiding investments you do not understand, or for which you cannot get complete information, is a good rule of thumb.
* Issues with paperwork. Do not accept excuses regarding why you cannot review information about an investment in writing. Also, account statement errors and inconsistencies may be signs that funds are not being invested as promised.
* Difficulty receiving payments. Be suspicious if you do not receive a payment or have difficulty cashing out your investment. Keep in mind that Ponzi scheme promoters routinely encourage participants to “roll over” investments and sometimes promise returns offering even higher returns on the amount rolled over.” https://www.sec.gov/fast-answers/answersponzihtm.html