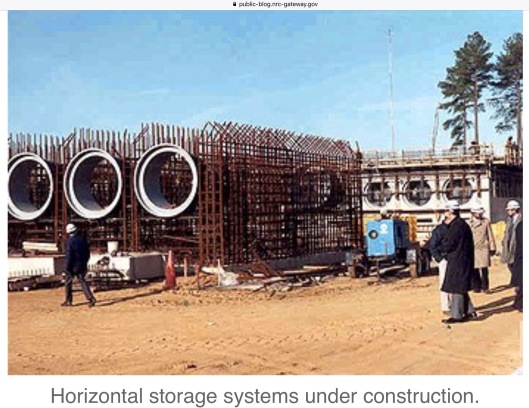 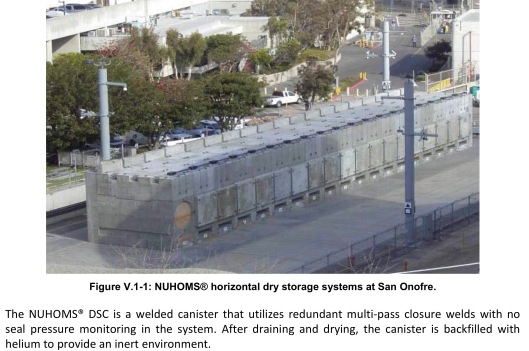 The French government is trying to get the US taxpayer to help pay for the bailout of their bankrupt government owned nuclear company, Areva, which they renamed Orano, by opening an “interim” nuclear waste dump in Texas. Japanese companies have bought into Orano at 10%, raising the question of if Japanese nuclear waste will come to Texas. Japan tried to send its nuclear waste to bury in Scotland in the 1980s. The Scots stopped them. The US taxpayer already lost an estimated $7.6 billion for the unfinished Areva MOX project in South Carolina.

So, after fleecing the American taxpayer out of billions for a MOX nuclear facility, which will never be completed due to cost overruns, the French government is trying to fleece Americans some more. They hope to do this in conjunction with a private company owned by Reagan’s Secretary of the Navy/former Kissinger staff member John Lehman. Together they call themselves Interim Storage Partners. Recall that Kissinger is a friend advisor to Putin, as well as to Trump.

The proposed interim storage facility is open air. It should be clear to any sane person that this is not the way to store nuclear waste, especially in the sweltering Texas heat, and with the risk of terrorist attack. Worse, the metal canister which protects the public from radioactive leaks is only between 1/2 inch and 5/8 inches thick. The concrete support is vented. The canisters are welded shut, which provides more areas for material failure and they cannot be opened and reclosed.

Double bolted lids with pressure monitors between the lids (like Castor), as well as radiation detectors should be required for high level nuclear waste, as should a much thicker canister.  But, they are not. Casks should be stored in buildings which have filters and cameras and radiation monitors, as in many countries. They generally are not.

The only thing good which can be said about this project is that we know where to find one of the owners, because it’s France. In the case of the competitor, Holtec, we don’t even know for sure who owns it. Assuming it is Kris Singh, he can go hide in another country, such as his motherland of India. But, it is impossible to hide an entire country. 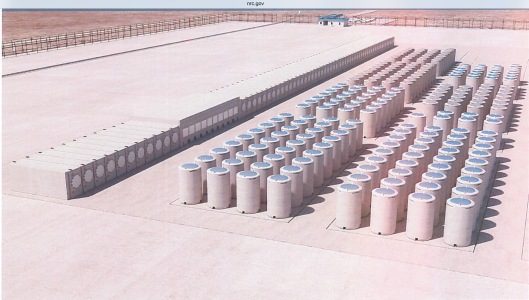 The US taxpayer lost an estimated $7.6 billion for the unfinished Areva MOX project. See:
https://www.washingtonpost.com/world/national-security/billions-of-dollars-later-energy-department-pulls-plug-on-partly-built-nuclear-fuel-plant/2018/05/11/aad411da-5532-11e8-b00a-17f9fda3859b_story.html See much more here: http://www.srswatch.org

Areva rebranded itself as Orano: https://miningawareness.wordpress.com/2016/11/25/areva-wants-us-taxpayers-held-liable-for-nuclear-accidents-defective-nuclear-parts-areva-gets-multimillion-contract-for-equipment-at-extra-high-risk-us-nuclear-power-station-despite-ongoing-areva-n/

Who is behind the interim storage scheme?

“John Lehman is chairman of J.F. Lehman & Company, a private equity investment firm… Lehman was appointed Secretary of the Navy by President Reagan in 1981 and served until 1987… He has served as staff member to Henry Kissinger on the National Security Council, as delegate to the Force Reductions Negotiations in Vienna and as deputy director of the U.S. Arms Control and Disarmament Agency…”
https://9-11commission.gov/about/bio_lehman.htm

According to the Congressional Research Office: “Under the WCS proposal, DOE would take title to spent fuel at nuclear plant sites, ship it to the Texas site, and pay WCS for storage for as long as 40 years with possible extensions, according to the company. DOE’s costs would be covered through appropriations from the Nuclear Waste Fund, as were most costs for the Yucca Mountain project.” https://fas.org/sgp/crs/misc/RL33461.pdf Once the (ratepayer funded) Nuclear Waste Fund is emptied, the cost falls back upon the taxpayer-debt.

In the UK, Japan, Switzerland, and probably every European country with nuclear waste, the spent fuel casks are housed inside of some sort of building. A building would allow secondary monitoring of spent fuel canisters and the potential to filter any leaks. Additionally, a building would help protect from the elements, helping to reduce corrosion, and ideally be resistant to airplane attacks. The Ukraine, and Kazakhstan have open air facilities, built with US help. In the case of the Ukraine, “The Guardian” newspaper has called these “shocking”: https://www.theguardian.com/environment/2015/may/06/nuclear-waste-stored-in-shocking-way-120-miles-from-ukraine-front-line

Most, and perhaps all, US high level nuclear is stored like North Anna Nuclear Power Station, which is near many small airports and the 50 mile fallout zone would impact Richmond Virginia and suburban DC. As seen in the pictures below, these spent fuel casks are huge, and yet only a very thin piece of metal, 1/2 to 5/8 inches thick, protects the environment from potentially lethal levels of radioactive materials. The concrete is vented. Don’t be fooled into thinking that those at the bottom are in a building. This is the horizontal storage system sold by French state-owned Areva (renamed Orano, as part of its bankruptcy-bailout). 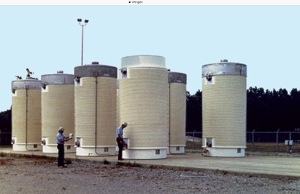 Clearly there is nothing innovative, then, about the spent nuclear fuel conceptual drawing for the WCS Interim Waste Facility as presented to the US NRC. Proposals to insert the casks in the ground (Holtec) would mean increased corrosion rates, increased difficulties in monitoring, increased retrieval difficulties and do not necessarily protect from an airplane crash as they are not deep enough in the ground.

Additionally the nuclear waste oligopoly needs to be broken and innovation in storage encouraged, instead of being blocked. The storage needs to be non-profit in order to have better storage at lower cost.

“Chernobyl in a Can”: San Onofre Cesium 137 vs. Chernobyl by Donna Gilmore https://sanonofresafety.org

“The majority of current U.S. irradiated spent fuel storage facilities use thin-walled (mostly 1/2” thick) stainless steel canisters that the NRC acknowledges cannot currently be inspected or repaired and are vulnerable to cracking and leaking 16 years after a crack starts.”

These “dry storage thin steel canister systems cannot be inspected, maintained, repaired, adequately monitored to avoid radioactive leaks, and the DOE pilot plan has no plan for replacing failing canisters or retrieval of fuel, as required by NWPA.” (Excerpts from Donna Gilmore-San Onofre Safety, 7-31-2016 Comment to the US DOE on “Consent Based Siting”). Additionally, as she points out, “Near real-time radiation monitoring with public access should be required,” yet it is not. Read here article and more here: https://miningawareness.wordpress.com/2017/02/13/interim-storage-open-air-parking-lots-of-high-level-nuclear-waste-risk-major-radioactive-leaks-most-canister-systems-do-not-meet-standards-made-of-thin-steel-neither-adequately-inspected-nor-adeq/ And here: https://sanonofresafety.org (in particular search for Shimkus within page) See too here: https://sanonofresafety.files.wordpress.com/2015/10/commentshr3053nwpa2017-06-23final.pdf

“Canisters are fabricated from stainless steel with shell thicknesses of 0.5 in. or 0.625 in. Typical canister lengths are 186 in. to 196 in. (4.7 m–5.0 m). ” See: “NDE to Manage Atmospheric SCC in Canisters for Dry Storage of Spent Fuel: An Assessment” https://www.pnnl.gov/main/publications/external/technical_reports/PNNL-22495.pdf

Public hearings have been held in New Mexico, Texas and in DC: https://miningawareness.wordpress.com/2017/02/12/dangerous-texas-high-level-radioactive-waste-open-air-parking-lot-dump-public-hearings-on-monday-and-wednesday-public-comment-to-march-13-license-application/

It is noteworthy that Idaho National [Nuclear] Lab lives off of promoting nuclear power and yet doesn’t want nuclear waste, even though that part of Idaho has already been subjected to a nuclear accident and is cool and arid. And, Idaho has a very low population.

The Texas Attorney General filed suit to force a definitive yes-no decision on Yucca Mountain. The Dallas Council reportedly voted against allowing transport of the nuclear waste through Dallas. The Texas AG is pro-nuclear.

Even from a statistical point of view they keep discovering that nuclear is more deadly than initially thought. Based on the Oct. 2015 multi-government funded study of nuclear workers, risk appears worse than even BEIR VII (ca 2005) thought, maybe even higher: https://miningawareness.wordpress.com/2018/05/09/trump-pruitt-nuclear-hit-job-on-the-epa-american-people-may-increase-radiation-exposure-by-400x-how-quickly-will-everyone-die/

CURRENTLY THE US ALLOWS 15 TIMES MORE RADIATION IN FOOD THAN JAPAN ALL OF THE TIME; CANADA, UK, AUSTRALIA-NZ ALLOW 10 TIMES AND EUROPE AROUND 6 TIMES. BUT WHEN ANOTHER NUCLEAR ACCIDENT OCCURS MORE EXPOSURE IS PLANNED. DUE TO THE OLD AND SHODDY CONSTRUCTION OF NUCLEAR REACTORS THE WORLD OVER, A NUCLEAR ACCIDENT IS IMMINENT. THEN THERE IS RISK ASSOCIATED WITH THE NUCLEAR WASTE, WHICH IS BURIED OR STORED IN CANISTERS WHICH ARE COSTLY BUT OFTEN CHEAPLY MADE.