This was the early days of Putin’s Presidency:
“Postal Inspectors executed a search warrant at Duke’s home in Mandeville, Louisiana, on November 16, 2000. Duke wasn’t there, having left for Russia several months earlier for a speaking engagement. He remained in Russia during much of the time he was under investigation.” (USPIS.gov).

How long has Duke been linked to Russia? Was he part of Soviet active measures? Duke moved to Russia around the time that former KGB officer Putin became President, and while Duke was being investigated by the US government. Duke sold his book in the Russian parliament (Duma). Is Mueller onto him? Duke has disavowed Klan ties, but clearly remains a white segregationist. He’s also apparently promoting the Iranian regime. Did the money with which Duke paid cash for his home really come from his fans? Or was he doing money-laundering for Russia? Will Mueller open the books back up?

“Duke was born in Tulsa, Oklahoma, to Alice Maxine (Crick) and David Hedger Duke. As the son of an engineer for Shell Oil Company, Duke frequently moved with his family around the world. They lived a short time in the Netherlands before settling in Louisiana…” https://en.wikipedia.org/wiki/David_Duke

“David Duke has traveled to Russia so many times that he got an apartment there.  According to David Duke on his twitter account, he lived in Russia for 5 years…” [1]

“At LSU’s Hodges Hall, Duke slept underneath a red-and-black swastika banner and sometimes dressed like a Hitler youth,…” [2]

Why did he leave Russia and serve his time in jail? Was Moscow too cold for him?

Duke pled guilty to mail fraud and making a false statement on a federal tax return.

When he decided to run for President in 1988, Democratic party leaders barred Duke from running on their ticket, so he signed with the Populist Party and hired ex-American Nazi leader Ralph Forbes as his campaign manager. David Duke’s name appeared on 15 state ballots and he received 0.5 percent of the national vote.

Duke next won a runoff in 1988 for a Louisiana House seat by only a 227-vote margin. He left that office after a single term in 1992. Running again as a Republican, Duke lost a primary for the U.S. Senate to Democratic incumbent J. Bennett Johnston. Duke still managed to get 43.5 per-cent of the vote.

In 1991, Duke ran second to Edwin Edwards as a Republican in the Louisiana Governor’s primary election. Duke lost the primary, but still won 39 percent of the vote.

Postal Inspectors in New Orleans began investigating David Duke in 1999. They started with solicitation letters he had mailed asking for cash donations from supporters. The letters claimed Duke was broke, but Inspectors found he was lying. In the letters were a number of misrepresentations. For example, Duke claimed he had lost money as the result of his unsuccessful bids for elected offices. In another letter he said he was the subject of a lawsuit filed as the result of a fight that broke out at one of his campaign rallies, leaving him vulnerable to a “six-figure judgment.” Duke allegedly was liable for yet another six-figure fine stemming from a possible state ethics violation. He told his supporters that he needed their money to spread his message: White Power! End Immigration to the United States! Postal Inspectors knew Duke’s claims of poverty were bogus.

Duke had paid cash for a house and still had half a million dollars in the bank. They determined he hid the money by putting his account under someone else’s name when it was time to negotiate donors’ checks. Likewise, Duke’s stories about liabilities from lawsuit judgments were less than factual. He had been dismissed from one suit and had paid a $10,000 fine to settle the ethics violation. As for needing money to spread his message, Duke’s speaking engagements were fully paid for by his sponsors.

Postal Inspectors executed a search warrant at Duke’s home in Mandeville, Louisiana, on November 16, 2000. Duke wasn’t there, having left for Russia several months earlier for a speaking engagement. He remained in Russia during much of the time he was under investigation.

The task force found Duke had mailed 26 versions of his solicitation letters between 1995 and 1999. Inspectors also interviewed scores of Duke’s supporters across the country, as well as aides who had prepared and sent his letters via the U.S. Mail. They analyzed Duke’s bank accounts and credit card activity to learn how Duke had spent his admirers’ money. More subpoenas were issued to financial firms, mutual funds companies, and credit card issuers associated with the man. Charting Duke’s credit card expenditures proved formidable, as he maintained more than 30 active and inactive accounts. Inspectors also analyzed his financial doings to substantiate allegations of money laundering. Postal Inspectors discovered Duke had never had a full-time job. He used donations to cover personal living expenses, although many of his supporters could hardly afford their generous contributions to his cause. Then he failed to report the donations as personal income when filing federal returns. Worse, Duke’s “living expenses” included huge sums he spent gambling in Louisiana, Mississippi, Nevada, and offshore casinos.

On December 18, 2002, Duke entered a plea agreement with the U.S. Attorney’s Office of the Eastern District of Louisiana. He agreed to plead guilty to a two-count Bill of Information charging him with mail fraud and tax evasion. In return, the government agreed not to bring other charges against him related to his suspect fund-raising activities involving the U.S. Mail, or his fraudulent income tax filings. In the end, Duke may have agreed to the plea to avoid harsher money laundering charges. David Duke was sentenced on March 12, 2003, to 15 months in prison and ordered to pay a $10,000 fine. On April 15, Duke reported to federal prison in Big Spring, Texas, to begin serving his sentence. 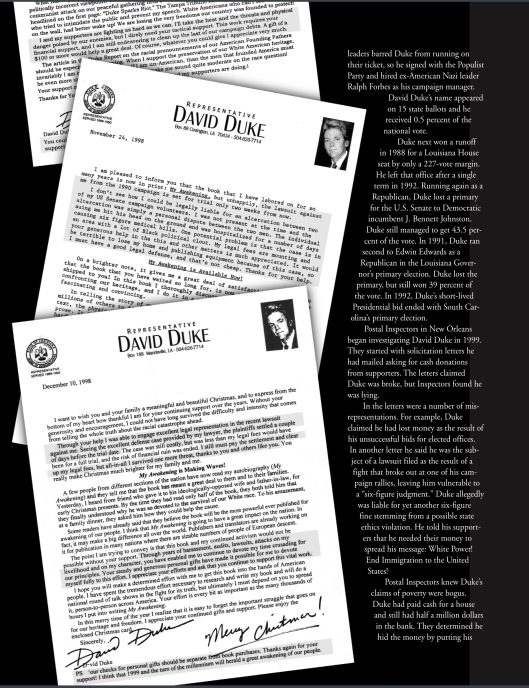 On September 10, 2003, Chief Postal Inspector Lee R. Heath presented the Chief Inspector’s Award to Assistant U.S. Attorneys Carter K.D. Guice and Jan Maselli Mann, both of the Eastern District of Louisiana, in appreciation for their exemplary work in the successful prosecution of former Louisiana State Representative David E. Duke. AUSA Mann recognized early in the investigation that David Duke had committed mail fraud and tax evasion when he solicited thousand of dollars through the U.S. Mail from contributors who were duped into believing they were supporting his political endeavors. Ms. Mann brought the case to U.S. Postal Inspectors, and later staged negotiations with Duke that resulted in his guilty plea. AUSA Guice worked closely with Postal Inspectors in New Orleans and enabled them to secure a search warrant at Duke’s home. Mr. Guice interviewed numerous campaign contributors, victims, and potential wit-nesses in the case and was instrumental in negotiating Duke’s return to the United States from Russia to face the charges brought against him.

What about Duke’s segregationist map, which he apparently promoted in the early 90s, where the southern US was going to be for African Americans, Louisiana French would be sent to Massachusetts or Maine, much of the northern US for Americans of English-German ancestry, etc. Why’s he still in the south then?

Beware to those who are running online Go-Fund Me sites. It sounds like misrepresentation could be a crime, and not just unethical.