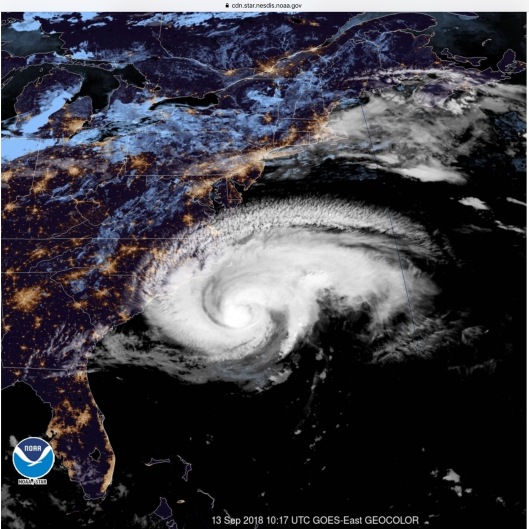 The US Nuclear Regulatory Commission NTTF [Near Term Task Force] observed that, “some [nuclear] plants have an overreliance on operator actions and temporary flood mitigation measures such as using sandbags, temporary flood walls and barriers, and portable equipment to perform safety functions.” The NTTF report also states that, “the Task Force has concluded that flooding risks are of concern due to a „cliff-edge‟ effect, in that the safely consequences of a flooding event may increase sharply with a small increase in the flooding level. Therefore, it would be very beneficial to safety for all licensees to confirm that structures, systems, and components (SSCs) important to safely are adequately protected from floods.” [1]

The NRC describes Brunswick Nuclear Power Station’s interim solution to flooding: “the licensee planned to install metal “Cliff Edge Barriers” at targeted areas on site. These barriers are installed 1 to 3 days prior to hurricane landfall and remain in place until the threat has passed.”[4] However, NRC Public Affairs Officer Scott Burnell reportedly stated that the “Cliff Edge Barriers” only protect for a storm surge of up to 26 ft![2] This is essentially the current design basis of 22 ft with 3.6 ft. of wave run-up and a small margin! The reevaluation calls for protection in the range of 33.6 to 33.8 ft, as can be seen in the NRC documents further below. The “Cliff Edge Barriers” thus appear to fall short by almost 8 feet! If the “Cliff Edge Barriers” add more than 26 ft of protection, then the NRC should update their blog, Facebook and Twitter and explain. They should update these forums, regardless. They haven’t updated their blog since Hurricane Irma. Although Brunswick Nuclear Power Station doesn’t sit directly on the coast, it sits on a complex estuary system, as seen below, meaning that the 33.8 ft could prove to be correct and possibly even a low figure. 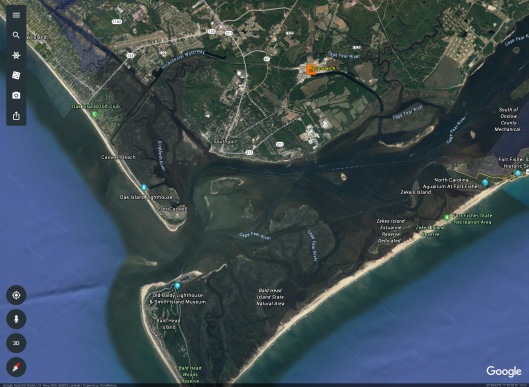 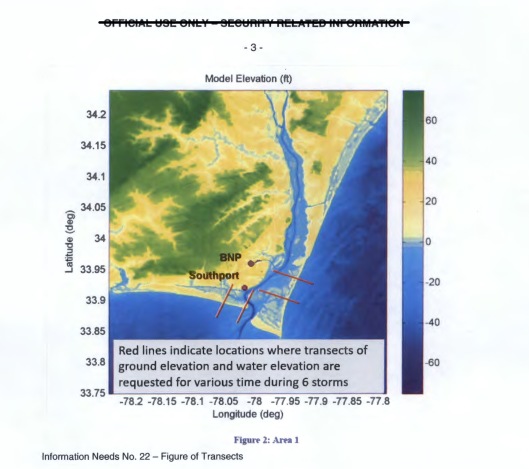 Brunswick is apparently located at an elevation of approximately 20 feet above sea level, as can be seen in the image above. Reuters states that “The NRC said in a 2004 report that all of the safety-related structures at Brunswick were waterproof up to 22 feet (6.7 meters) above sea level.”[3].

However, it is more complicated than that, as seen in the NRC charts below comparing current design basis and the post-Fukushima reevaluation. Current design basis is listed for safety related buildings as 22 ft still water, with waves of 3.6 ft leading to 25.6 feet, and with margin 26.1 ft. (At the intake structure it is listed as 28.3.) The post-Fukushima reevaluation requires protection for 26.5 ft still water plus 7 ft wave run-up for the reactor and diesel generator building, i.e. 33.5 ft. For the Radwaste Building it should be 33.7 ft, and turbine 33.8 ft. These levels may not be high enough, depending on the input assumptions.

BELOW: CURRENT DESIGN BASIS CHARTS ARE FOLLOWED BY REEVALUATION CHARTS
Where are combination events? Storm surge and rain and river flooding? Dam failure upstream? Would an even higher elevation-level of protection be required? 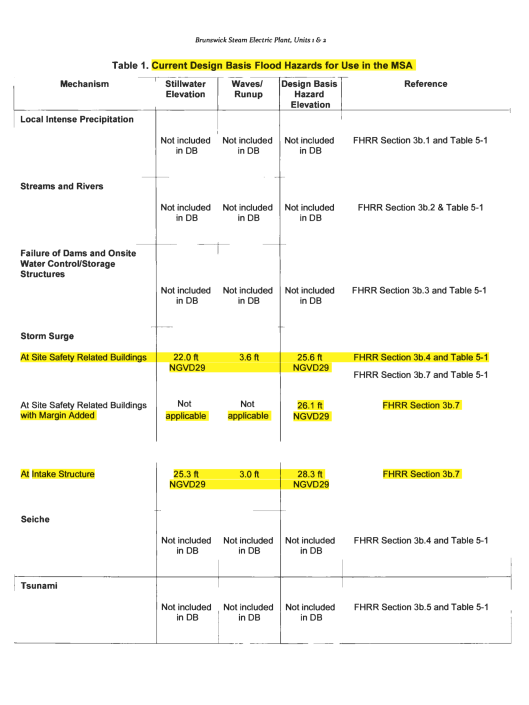 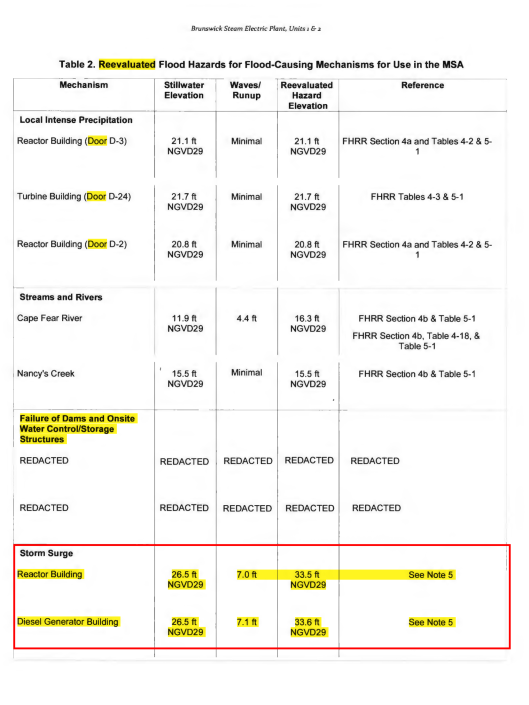 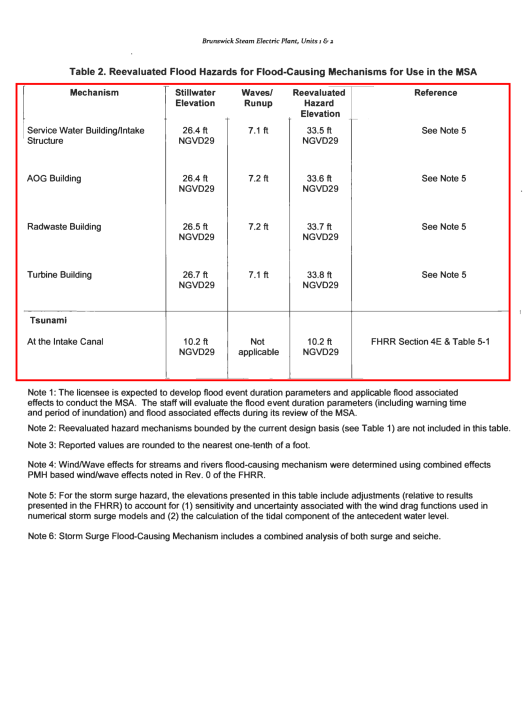 Even the resident US NRC inspector, Galen Smith, admitted to the News Observer that flooding poses a threat. He informed them that two NRC inspectors will be inside the Brunswick nuclear power station during Hurricane Florence and that they have been monitoring advance preparations. Additionally, there are reportedly five on-site emergency backup diesel generators, and two additional generators have been installed at elevated levels, in case the water is higher than estimated.[4] How high are these elevated generators? We aren’t told.

“NRC inspectors are verifying that all preparations have been completed, and the plants’ emergency diesel generators are available with ample fuel if the storm affects off-site power.” Read their official news release here: https://www.nrc.gov/reading-rm/doc-collections/news/2018/18-032.ii.pdf

On March 18, 2018, the NRC wrote in an internal memo: “The TI 2515/190 was first issued on August 30, 2013 with an expiry date of December 31, 2015. Revision 1 of the TI was issued on September 4, 2015 and the expiry date was extended until December 31, 2016… The following examples describe interim action scenarios proposed by licensee’s that were inspected under TI 2515/190: … Brunswick: Based on the hazard mechanisms determined to be non-bounded in the FHRR, the licensee planned to install metal “Cliff Edge Barriers” at targeted areas on site. These barriers are installed 1 to 3 days prior to hurricane landfall and remain in place until the threat has passed.” [5] However, in April, the NRC wrote Mr. William R. Gideon, Site Vice President, Brunswick Steam Electric Plant and appear to still be awaiting a permanent solution: “By letter dated March 16, 2017 (ADAMS Accession No. ML 17072A364), the NRC staff sent the licensee a summary of the staff’s review of Brunswick’s reevaluated flood-causing mechanisms… As stated in the letter, the reevaluated flood hazard results for the local intense precipitation, streams and rivers, failure of dams and onsite water control/storage structures, storm surge, and tsunami flood-causing mechanisms were not bounded by the current design basis. In order to complete its response to Enclosure 2 to the 50.54(f) letter, the licensee is expected to submit a focused evaluation or an integrated assessment in order to address these reevaluated flood hazards…“[6]

NRC spokesperson, Scott Burnell, as cited in the News Observer, describes the “cliff edge” flood barriers as “designed to repel a storm surge of 26 feet“. Burnell is reportedly basing his information on a Duke Energy document given to the NRC. According to the article: “Each barrier consists of an aluminum plate fasted to the wall with stainless steel anchors and backed by a rubber strip to create an waterproof seal. They will be installed at nine doors in the diesel generator building, control building and in the reactor building’s airlock doors“. Additionally, it takes “up to 2 1/2 hours to install each barrier“. The utility (Duke) starts installing them when a hurricane watch is issued, he says. Scott Burnell reportedly characterizes these barriers “as part of Brunswick’s long-term strategy for ‘dealing with events that might exceed the plant’s original design basis.” [7]

Let’s see – Scott Burnell is Public Affairs officer at the NRC. Does that mean he can’t even do basic math, and see that 26 ft isn’t 33.5-33.8 ft? If this adequately seals all doors and makes the protection greater than 26 ft, then they need to clarify. These “cliff-edge” barrier plates appear to be part of the original design basis or part of the interim design basis upgrade. The 26 ft reported in the article – and the NRC didn’t bother to report on their Facebook page, Twitter or web site – is the “current” pre-Fukushima flood reevalution design basis.

The current storm surge and flooding predictions for Florence may make the original design basis good enough for now, we hope, but it still may not be good enough next time. Eventually the “big one” will come, and, as in New Orleans, the worst case scenario may not play out exactly as expected.

“STORM SURGE: The combination of a dangerous storm surge and the
tide will cause normally dry areas near the coast to be flooded by
rising waters moving inland from the shoreline. The water has the
potential to reach the following heights above ground if peak surge
occurs at the time of high tide…

The deepest water will occur along the immediate coast in areas of
onshore winds, where the surge will be accompanied by large and
destructive waves. Surge-related flooding depends on the relative
timing of the surge and the tidal cycle, and can vary greatly over
short distances. For information specific to your area, please see
products issued by your local National Weather Service forecast
office.

RAINFALL: Florence is expected to produce heavy and excessive
rainfall in the following areas…

See too: “Hurricane Florence On Track to Hit East Coast Nuclear Plants
Brunswick and Surry May Be Vulnerable to Flooding“, by David Lochbaum
https://www.ucsusa.org/press/2018/hurricane-florence-track-hit-east-coast-nuclear-plants-