As of April 2018, the US NRC hadn’t received information about how Brunswick Nuclear Power Station was going to address the reevaluation of flooding hazard. As it is unclear how they would do it without building a flood wall and/or perhaps major water-proofing, they probably still haven’t addressed it.
https://miningawareness.wordpress.com/2018/09/13/brunswick-nuclear-power-stations-cliff-edge-barriers-appear-to-fall-almost-8-feet-short-of-required-storm-surge-protection-level/

On April 16, 2018, the US NRC wrote Brunswick Nuclear Power Station in North Carolina:
“By letter dated March 16, 2017 (ADAMS Accession No. ML 17072A364), the NRC staff sent the licensee a summary of the staff’s review of Brunswick’s reevaluated flood-causing mechanisms… As stated in the letter, the reevaluated flood hazard results for the local intense precipitation, streams and rivers, failure of dams and onsite water control/storage structures, storm surge, and tsunami flood-causing mechanisms were not bounded by the current design basis. In order to complete its response to Enclosure 2 to the 50.54(f) letter, the licensee is expected to submit a focused evaluation or an integrated assessment in order to address these reevaluated flood hazards,…” 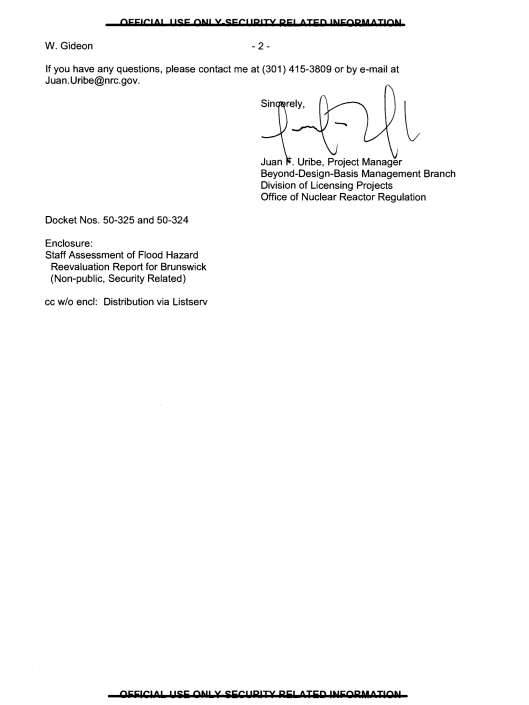 Reuters reported that “The NRC said in a 2004 report that all of the safety-related structures at Brunswick were waterproof up to 22 feet (6.7 meters) above sea level.”
See: “U.S. nuclear power plants prepare for Hurricane Florence
Posted:Tue, 11 Sep 2018 17:13:16 -0400
Several nuclear power reactors in North and South Carolina and Virginia on Tuesday started to prepare for Hurricane Florence, which is expected to hit the coast as a major hurricane on Friday. ” http://feeds.reuters.com/~r/reuters/environment/~3/3NrUaH9iTcs/u-s-nuclear-power-plants-prepare-for-hurricane-florence-idUSKCN1LR2C8

However, the US NRC and the utility agreed that 22 ft was not high enough for the worst case scenario.

BELOW: CURRENT DESIGN BASIS CHARTS ARE FOLLOWED BY REEVALUATION CHARTS 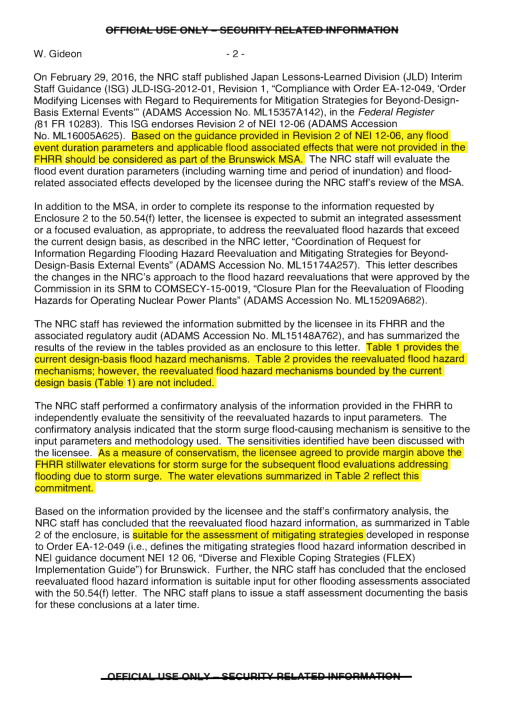 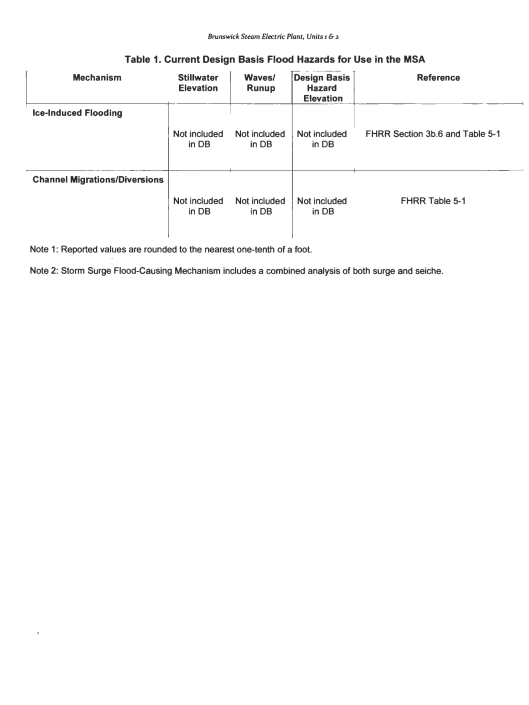 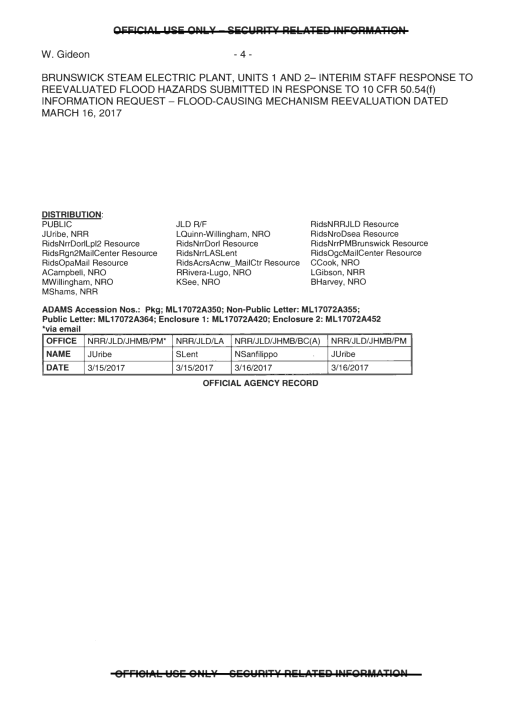 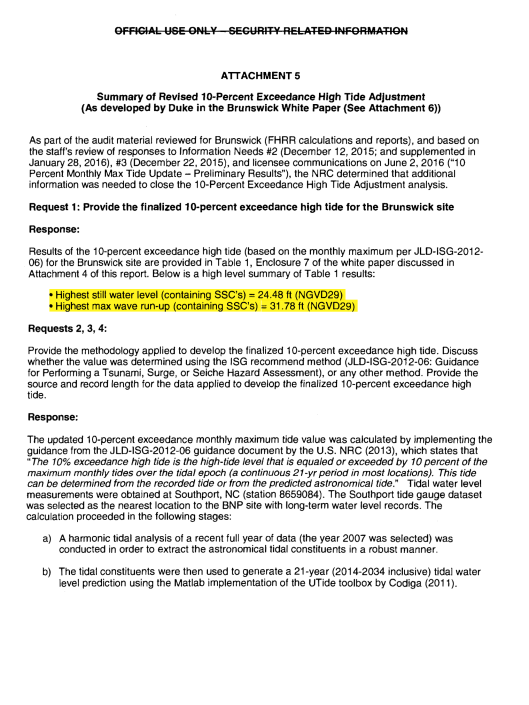 Tidal height (amplitude) decreases as the tidal pulse moves up-river. The average tidal amplitude in the lower river, (near its mouth) is approximately four feet (CP&L 1980, pg. 4-5). Tidal currents in the estuary average 3.4 feet per second, thus the movement of water in the channel during a six-hour ebb or flood tide is approximately 14 miles. This tidal excursion is large compared to the length of the estuary, and as a result water and associated organisms can be moved through the system in a few days.

The portion of the estuary seaward of Sunny Point, in which BSEP is located (essentially the first tidal reach), is characterized by complex water circulation patterns, vigorous tidal action, turbulence, fluctuating salinity levels, and high exchange ratios with the ocean. In many respects, this reach of the estuary acts as an extension of the nearby coastal zone. The distribution and abundance of aquatic organisms in the lower

Regarding the Spent Nuclear Fuel Facility, which is apparently NuHoms – Transnuclear-Areva/Orano. They claim that it can deal with a flood height of 50 feet, though the impacts of salt water on it cannot be good. Its elevation is apparently around 20 feet.
“2.2.2 Water Level (Flood) Design

The 32PTH DSC and HSM-H are designed for an enveloping design basis flood, postulated to result from natural phenomena such as tsunami, and seiches, as specified by IOCFR 72.122(b). For the purpose of this generic evaluation, a flood height of 50 feet with a water velocity of 15 fps is used. The 32PTH DSC is subjected to an external hydrostatic pressure equivalent to the 50 feet head of water or 21.7 psi. The HSM-H is evaluated for the effects of a water current of 15 fps impinging on the sides of a submerged HSM-H. For the flood case that submerges the HSM-H, the inside of the HSM-H will be rapidly filled with water through the HSM-H vents. Therefore, the HSM-H components are not evaluated for the resulting static head of water. The effects of flooding and submergence on the canister are addressed in Chapters 3, 4 and 11.

2.2.2.1 Flood Elevations
It is anticipated that the 32PTH DSC and HSM-H will be located on flood-dry sites. However, as stated above, the HSM-H and 32PTH DSC are designed for a flood elevation 50 ft. above the base of the HSM-H.

2.2.2.2 Phenomena Considered in Design Load Calculations
The HSM-H is designed to withstand loads from forces developed by the probable maximum flood including dynamic phenomena such as momentum and drag. The 32PTH DSC is designed for the hydrostatic head equal to 50 ft. water submergence.” https://www.nrc.gov/docs/ML0415/ML041540170.pdf

5 AM Storm Surge Flooding Update for Sept 12, 2018 Hurricane Florence:
“STORM SURGE: The combination of a dangerous storm surge and the
tide will cause normally dry areas near the coast to be flooded by
rising waters moving inland from the shoreline. The water has the
potential to reach the following heights above ground if peak surge
occurs at the time of high tide…

The deepest water will occur along the immediate coast in areas of
onshore winds, where the surge will be accompanied by large and
destructive waves. Surge-related flooding depends on the relative
timing of the surge and the tidal cycle, and can vary greatly over
short distances. For information specific to your area, please see
products issued by your local National Weather Service forecast
office.

RAINFALL: Florence is expected to produce heavy and excessive
rainfall in the following areas…