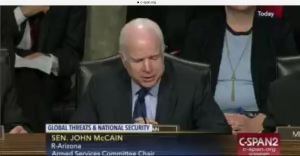 On August 24, 2018, shortly after John McCain’s family announced that he was discontinuing medical treatment, McCain’s very critical statement about the Trump-Putin Helsinki meeting disappeared from his Senate web site. This wasn’t a matter of maintenance as it disappeared from the index, as can be seen on internet archive screen captures found further below. Shortly after his death was announced on the 25th, the entire content of his Senate web site disappeared, but it is apparently back up, probably due to complaints. However, his statement on the Helsinki meeting is still missing, as of this writing. His statements should be public record. Who disappeared his statement on the Trump-Putin meeting in Helsinki? Where is the outrage over this censoring of a dying and now dead man? Over censoring a US Senator? One can be certain that he didn’t ask for it to be removed as he lay dying. He appears to have tried to redeem himself before death by challenging Trump, and, according to news reports, insisted that he didn’t want Trump at his funeral.

“Today’s press conference in Helsinki was one of the most disgraceful performances by an American president in memory. The damage inflicted by President Trump’s naiveté, egotism, false equivalence, and sympathy for autocrats is difficult to calculate. But it is clear that the summit in Helsinki was a tragic mistake.

“President Trump proved not only unable, but unwilling to stand up to Putin. He and Putin seemed to be speaking from the same script as the president made a conscious choice to defend a tyrant against the fair questions of a free press, and to grant Putin an uncontested platform to spew propaganda and lies to the world.

“It is tempting to describe the press conference as a pathetic rout – as an illustration of the perils of under-preparation and inexperience. But these were not the errant tweets of a novice politician. These were the deliberate choices of a president who seems determined to realize his delusions of a warm relationship with Putin’s regime without any regard for the true nature of his rule, his violent disregard for the sovereignty of his neighbors, his complicity in the slaughter of the Syrian people, his violation of international treaties, and his assault on democratic institutions throughout the world.

“Coming close on the heels of President Trump’s bombastic and erratic conduct towards our closest friends and allies in Brussels and Britain, today’s press conference marks a recent low point in the history of the American Presidency. That the president was attended in Helsinki by a team of competent and patriotic advisors makes his blunders and capitulations all the more painful and inexplicable.

“No prior president has ever abased himself more abjectly before a tyrant. Not only did President Trump fail to speak the truth about an adversary; but speaking for America to the world, our president failed to defend all that makes us who we are—a republic of free people dedicated to the cause of liberty at home and abroad. American presidents must be the champions of that cause if it is to succeed. Americans are waiting and hoping for President Trump to embrace that sacred responsibility. One can only hope they are not waiting totally in vain.” ###Permalink: https://www.mccain.senate.gov/public/index.cfm/2018/7/statement-by-sasc-chairman-john-mccain-on-trump-putin-meeting (Emphasis our own.)

Related (not deleted as of this writing):
“Jul 13 2018
STATEMENT BY SASC CHAIRMAN JOHN McCAIN ON INDICTMENT OF 12 RUSSIAN INTELLIGENCE OFFICERS
Washington, D.C. – U.S. Senator John McCain (R-AZ), Chairman of the Senate Armed Services Committee, released the following statement on the indictment of 12 Russian intelligence officers for interfering in the 2016 presidential election:

“Today’s indictment is a result of the hard work of America’s law enforcement and intelligence officials who dedicate their lives to bringing to justice those who wish to do us harm. These revelations add to a body of evidence confirming an extensive plot by Vladimir Putin’s government to attack the 2016 election, sow chaos and dissension among the American electorate, and undermine faith in our democracy. And despite repeated warnings from our nation’s top intelligence and military leaders, the Kremlin’s efforts to weaken our institutions have continued unabated with insufficient action taken by the administration or Congress to strengthen our cyber defenses, safeguard our election systems, and deter further destabilizing activities.

“President Trump must be willing to confront Putin from a position of strength and demonstrate that there will be a serious price to pay for his ongoing aggression towards the United States and democracies around the world. If President Trump is not prepared to hold Putin accountable, the summit in Helsinki should not move forward.” ###” Permalink: https://www.mccain.senate.gov/public/index.cfm/2018/7/statement-by-sasc-chairman-john-mccain-on-indictment-of-12-russian-intelligence-officers

Screen capture before the statement was deleted. The red dot shows the date. 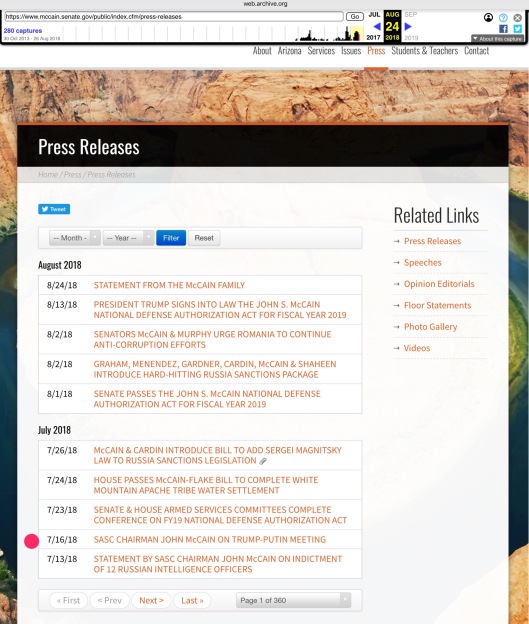 http://web.archive.org/web/20180824162012/https://www.mccain.senate.gov/public/index.cfm/press-releases
The screen capture, below, was taken on August 25th in the USA, but it was already August 26th UTC. The statement about the Trump Putin meeting statement disappeared on August 24th in the USA, shortly after the announcement that McCain was stopping medical treatment, but after the Wayback Machine copy was made. The statement listed for July 12th is prior to the July 16th meeting and not at all the same. 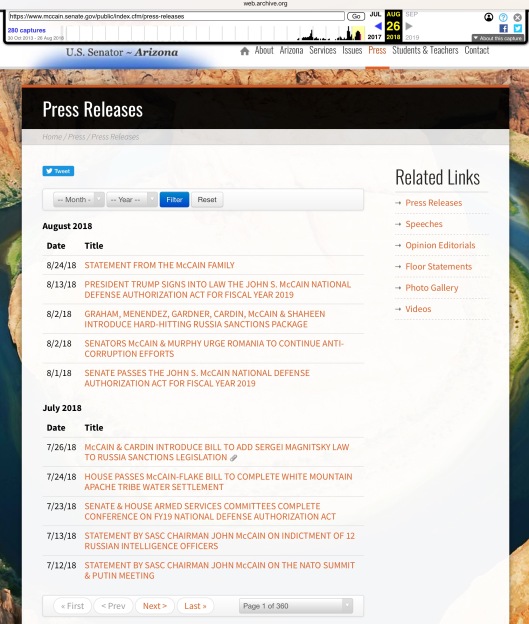 Instead of the above, we continue to get the following:

Shortly after McCain passed away, there was only this and no more Senate web site at all, but someone must have complained and it returned within a few hours, but the July 16th statement is still missing:

US Senator Markey on the Trump Putin summit: https://miningawareness.wordpress.com/2018/07/18/the-helsinki-humiliation-us-senator-markey-on-trump-putin-summit/