The Kremlin linked Night Wolves motorcycle gang has set up camp in Slovakia, in a former military base, complete with tanks, according to drone footage. This is 50 years after the Kremlin ordered invasion of the country (then Czechoslovakia). Trump’s Cold War period relationship-marriage (1977) to the Czech mother of his three adult kids is probably his earliest tie to the Kremlin, via a Soviet Bloc country. His children spent summers there during the Cold War, and his inlaws spent much of the year in Trump Tower, acting as de facto spies. Trump has motorcycle club friends too: https://miningawareness.wordpress.com/2018/08/12/are-trumps-biker-friends-connected-to-florida-based-spetsnaz-motorcycle-club-russian-night-wolves-and-or-organized-crime/ 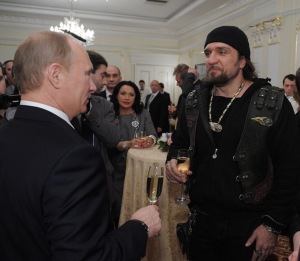 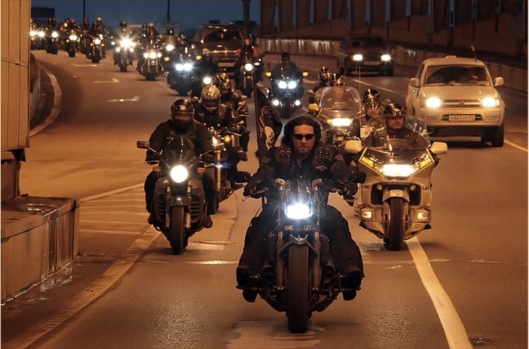 With the 50th anniversary of the Warsaw Pact invasion to rein in then-Czechoslovakia quickly approaching, one of the Kremlin’s boldest advocacy groups has set up a military-style “camp” outside the capital of NATO member Slovakia.

The Night Wolves motorcycle club, whose members were at the vanguard of Russia’s occupation of Crimea and nicknamed “Putin’s Angels” by the media, has taken residence at a former military base in Dolna Krupa, about 60 kilometers northeast of Bratislava.

The move by the club, known for promoting Russian nationalism, hatred of gays and feminists, and allegiance to the Kremlin, appears aimed at revealing a dark, anti-Western side of the European Union member, which has sizable far-right and Russophile elements.

The group, which has been hit with sanctions from the West over its support for pro-Russia separatists in eastern Ukraine, was established in Slovakia last month.

With an imposing 2-meter-high black wall topped with barbed wire surrounding the facility, few know what goes on inside.

But what is known via drone photos is that it houses tanks, armored vehicles, and police equipment. https://zpravy.aktualne.cz/zahranici/nocni-vlci-slovensko-dolna-krupa/r~10ef2acc8bfc11e88a270cc47ab5f122/

According to the newspaper Hospodarske Noviny, the local branch of the Night Wolves is headed by Jozef Hambalek, who the newspaper says owns the property and is close to former Interior Minister Robert Kalinak. Neither has commented publicly on the base. https://slovensko.hnonline.sk/1779648-zakladni-nocnych-vlkov-sefuje-kalinakov-znamy

Hambalek is said to want to open a military museum in the complex.

But the military equipment is said to be owned by the Defense Ministry, which has suspended Miloslav Capalovic, the head of the Military History Institute, for allowing equipment to be rented by Hambalek.

“It is obvious that the head of the Military History Institute, Miloslav Caplovic, failed to thoroughly check on the background of this civic association, and thus, he exceeded his competences,” according to Defense Ministry spokeswoman Danka Capakova. https://spravy.pravda.sk/domace/clanok/477601-sef-ustavu-ktory-nocnym-vlkom-pozical-vojensku-techniku-respektuje-gajdosove-rozhodnutie/

Police say they have been monitoring the group’s activities but that so far they’ve seen nothing illegal.

The Foreign Ministry has expressed concern, saying “the activities of group members need to be carefully monitored and evaluated.”

But Jaroslav Nagy, director of the Slovak Institute for Security Policy, warned against an overly lax approach to the matter.

“This is beyond the limits of the permissible…. Their actions are always seen as unequivocal propaganda actions,” he said in an interview with RFE/RL’s Russian Service.

The Night Wolves’ leader, Aleksandr Zaldostanov, has frequently appeared in public with Putin, and is known for his fiercely nationalistic statements.

He has led the group on a series of provocative rides before — including a Victory Day trip to Berlin and a candlelighting at Katyn, where Josef Stalin is said to have ordered the execution of tens of thousands of Polish officers during World War II.

More recently, though without Zaldostanov, nearly two dozen Night Wolves took part in what they called a “Russian Balkans” tour in March. https://www.rferl.org/a/night-wolves-motorcycle-club-troll-bosnia-region-putin/29111436.html

Earlier that month, Bosnia-Herzegovina’s authorities had banned Zaldostanov, who calls himself “The Surgeon,” from entering the country as he was deemed a potential threat to Bosnia’s national security.

Bosnia officials alleged the tour was aimed at intimidating non-Serbs in the divided country, where a 1992-95 ethnic war killed more than 100,000 people.

The tour also coincided with what Western intelligence officials say has been an increase in efforts by Moscow to expand its influence in the Balkans.

In Slovakia, the Student Initiative group said it was so concerned over the situation that it has called a protest for July 27.

“We urge all citizens to come along with us to express our disapproval of having such an object on our territory, and to show together that the security of our country is not stolen,” said Timothy Lauko of the initiative, which uses the hashtag #niejenamtojedno — roughly meaning “it matters to us” in Slovak.

“The Night Wolves are known to be a paramilitary bomber unit directly supported by the Russian Kremlin. This motorcycle gang also echoes members who, along with the Prussian separatists, fight with our eastern neighbors in Ukraine,” he added.

Night Wolves members were among the spearheads of Russia’s covert invasion and occupation of the Ukrainian peninsula of Crimea in 2014, according to officials in Kyiv. https://www.theguardian.com/world/2014/feb/28/ukraine-night-wolves-military-seize-crimea

If many outsiders are worried about the current situation in Slovakia, it might be hard to say the same of nearby residents. “They recently celebrated something [and] they behaved decently,” the Internet information website Topky.sk quoted one Slovak villager as saying. “Russian bikers also go here; there are no problems with them.” Copyright (c) 2018. RFE/RL, Inc. Reprinted with the permission of Radio Free Europe/Radio Liberty, 1201 Connecticut Ave NW, Ste 400, Washington DC 20036“. https://www.rferl.org/a/night-wolves-putin-bikers-slovakia-military-camp-/29385437.html (Emphasis our own.)

50 years after the Soviet invasion of Czechoslovakia, we can but wonder, worry, and wait, especially considering Trump’s ties to Czechoslovakia.

It appears that Trump’s (now former) inlaws acted as informants to the Czech secret police, who in turn worked with the KGB (where Putin used to work). They lived in Trump Tower for 6 months of the year, during the Cold War. And, his children stayed in Czechoslovakia, during the Cold War, for weeks at a time in the summer. It’s where they became hunters.

“The archives also reveal a file named after Ivana’s father Miloš Zelníček, who was monitored by the StB. During a trip to the US for Ivana’s wedding Miloš Zelníček was subject to an StB-ordered search of his possessions at the airport, interpreted as a warning shot that cooperation was the only way such trips would be permitted in the future…. Records also suggest that after 1978 a so-called “operative file” was established on Ivana Trump, but researchers have yet to locate it…” Excerpted from: “CZECHOSLOVAK SECRET POLICE FILES REVEAL INTEREST IN TRUMP COUPLE“, by Dominik Jůn 02-12-2016 http://www.radio.cz/en/section/curraffrs/czechoslovak-secret-police-files-reveal-interest-in-trump-couple

While Trump’s now former wife and mother of his three adult children, Ivana, was born in what was then Czechoslovakia, the town is currently in the Czech Republic. https://en.wikipedia.org/wiki/Ivana_Trump

From the Canadian Journal of Armed Forces:
‘Wolves of the Russian Spring’: An Examination of the Night Wolves as a Proxy for the Russian Government by Matthew A. Lauder http://www.journal.forces.gc.ca/vol18/no3/page5-eng.asp?utm_source=newsletter&utm_medium=email&utm_campaign=kremlin_watch_briefing_the_night_wolves_a_russian_biker_gang_are_a_tool_of_russian_intelligence&utm_term=2018-08-19