“This is obviously very high level and sensitive information but is part of Russia and its government’s support for Mr. Trump – helped along by Aras and Emin” [Agalarov] (June 3, 2016, Rob Goldstone email to Trump Jr.)

Investigative journalist and Trump biographer David Cay Johnston has suggested that everyone take another look at the Rob Goldstone email to Trump Jr. and read it carefully. He says that it makes clear that there was already an ongoing conspiracy between the Kremlin and the Trump Administration. He says that Trump is not a loyal citizen and that his ties to Russia date back to 1983. See more here: https://miningawareness.wordpress.com/2018/08/01/do-trump-jr-emails-indicate-an-ongoing-conspiracy-between-the-kremlin-and-the-trumps/ 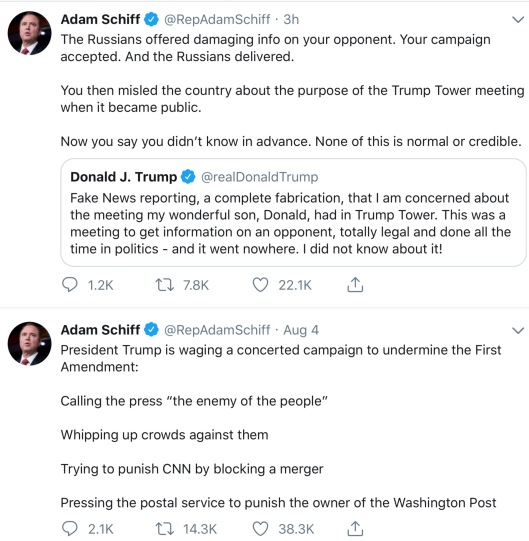 From VOA:
“Trump: US Media ‘Very Dangerous & Sick’
August 05, 2018 10:27 AM, by Ken Bredemeier
U.S. President Donald Trump, in the midst of a working vacation, unleashed a new barrage of attacks on the national news media Sunday, saying it was “very dangerous & sick!”

“The Fake News hates me saying that they are the Enemy of the People only because they know it’s TRUE,” Trump tweeted from his Bedminster golf resort in New Jersey. “I am providing a great service by explaining this to the American People. They purposely cause great division & distrust. They can also cause War!”

Trump called news accounts “a complete fabrication” that he was concerned about the legal liability his eldest son, Donald Trump Jr., could face for arranging a June 2016 meeting with a Russian lawyer said to have dirt on Trump’s opponent, Democrat Hillary Clinton.

“This was a meeting to get information on an opponent, totally legal and done all the time in politics – and it went nowhere,” Trump said on Twitter. “I did not know about it!”

The president has denied knowledge of the meeting at his Trump Tower campaign headquarters in New York in the face of news accounts saying his former personal attorney, Michael Cohen, is prepared to tell special counsel Robert Mueller that he heard Trump’s son tell his father in advance about the meeting.

“Too bad a large portion of the Media refuses to report the lies and corruption having to do with the Rigged Witch Hunt – but that is why we call them FAKE NEWS!” Trump said.

Mueller is in the midst of a 15-month investigation of Russian meddling in the 2016 U.S. presidential election, Trump campaign ties to Russia and whether Trump, as president, obstructed justice by trying to thwart the investigation. Trump has repeatedly denied collusion with Russia or any other wrongdoing.

Trump railed again Sunday about Mueller’s probe, calling it “the most one sided Witch Hunt in the history of our country. Fortunately, the facts are all coming out, and fast!”

Trump’s latest offensive against stories he does not like about his 18-month presidency came hours after he rallied supporters in the midwestern state of Ohio. He campaigned for a Republican candidate facing a tough race Tuesday for a seat in the House of Representatives, the last special election before the nationwide November 6 voting, when the entire 435-member House is being contested and a third of the 100-member Senate.

Republicans have held the seat in a suburban enclave just outside the Ohio capital of Columbus for three decades, but fear losing it could presage loss of their majority House bloc in the November voting.

“They’re talking about this blue wave,” Trump said referring to way Democrats are depicted on electoral maps. Shaking his head, he added, “I don’t think so. I don’t think so.”

Trump described the Republican candidate, state legislator Troy Balderson, as “really smart” and a “really hard worker,” while disparaging his Democratic opponent, local official Danny O’Connor, as a would-be pawn of national Democratic officials and “a low-level person that did nothing.”….” https://www.voanews.com/a/trump-us-media-very-dangerous-sick-/4514444.html