About 4 million people in India’s northeastern Assam state find themselves in legal limbo after their names were left off a controversial list of registered Indian citizens. Unless the residents in question can prove their citizenship status, they could face the prospect of statelessness or eventual deportation. 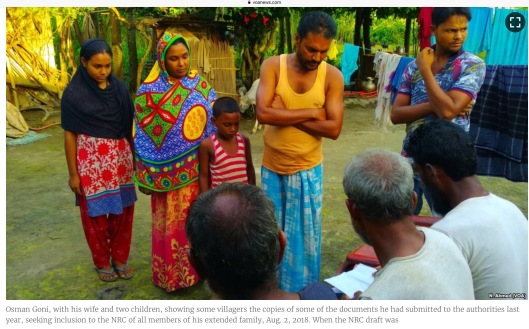 The government Monday released the list, known as the National Register of Citizens, or NRC. The database includes the names of people who can prove they lived in Assam or came to the state before neighboring Bangladesh declared its independence in late March 1971.

At the time, mainly Muslim Bangladesh was known as East Pakistan. After Pakistan launched a military crackdown that year, hundreds of thousands of Hindus and Muslims crossed into Assam, seeking refuge.

For more than a century, Hindus and Muslims have moved from what is now Bangladesh to Assam to earn their living; however, India regards any Bengali-speaking people who settled in Assam after March 1971 to be illegal immigrants.

India’s home minister, Rajnath Singh, said in parliament Monday that no coercive action like deportation would be taken against anyone on the basis of the latest draft register. He also said people would have opportunities to get their names in the database, which majority-Hindu India says is designed to identify illegal Bangladeshi immigrants.

Still, many Assam residents are worried. Several people in Assam have died or committed suicide in recent years, reportedly because of NRC-related tension. Hanif Khan, a Muslim car driver, hanged himself in Cachar district on January 1, hours after an incomplete draft of the NRC was published and he found his name did not appear in the list. Born in Assam, Khan feared, he would be sent to a detention center or deported to Bangladesh, his wife said.

Draft NRC
Deporting alleged illegal immigrants has been a key agenda item for Prime Minister Narenda Modi’s Bharatiya Janata Party, or BJP, which swept to power and formed the federal government in 2014. About 33 million people in Assam sought to be included on the list after the government began the process of updating the names in 2015.

Modi’s Hindu nationalist party also came to power in Assam for the first time in 2016, promising action against illegal immigrants.

After the draft NRC was published Monday, the names of many Muslims, as well as Hindus, were reported to have been excluded.

Dinabandhu Karmakar, a Hindu college student in Dhubri district, said he was “not worried” at all, but he noted the list did not include the names of three family members.

“Assam’s chief minister, Sarbananda Sonowal, and other ministers in the state have assured [that they will] protect us [Hindus]. They will not deport us. Nor will they send us to detention centers. The government will not put any Hindu in trouble; all Hindus and I believe,” Karmakar told VOA.

Musabirul Hoque, a social activist in Udalguri district, said the names of his entire family of 10 people, including his father, brothers and sister, are missing from the NRC draft. The Muslim activist said, though, that he is not worried.

“We submitted documents showing my father passed out of high school in Assam in 1965. This acceptable proof shows that we all in my father’s family are Indian citizens. Perhaps for some technical error, our names have been missed,” Hoque, 29, told VOA. “After we resubmit all documents, I am sure, our names will appear in the NRC finally,” he said.

Fears over omission
Muslim private school teacher Osman Goni said he fears harassment after the names of 16 members of his 17-member family, including his, did not appear on the list.

“We submitted copies of my grandfather’s land deeds of 1945 and 1952. We also submitted my father’s court document of 1959. They are all solid proof that we all are Indians. Yet, we were not included,” Goni, who teaches at a private school in Darrang district, told VOA.

“If, following the next stage of correction of the draft, we fail to make it to the register, we could be declared foreigners. To prove that we are Indians, our legal fights in a foreigners’ tribunal or courts will be tormenting for us for financial and other reasons. We are very anxious.”

Rupam Goswami, a BJP spokesperson in Assam, said no genuine Indian citizens will be left off the register.

Hanif Khan, seemingly depressed, sits at his Kashipur village home in Cachar district of Assam a few days before he committed suicide on Jan. 1, 2018. He hanged himself hours after he found his name missing from the previous draft of NRC, published on Jan

“What has been released this week is actually a final draft of the NRC. This is not the final NRC. People still will get a chance to file claims and objections seeking inclusion of their names to the NRC. All genuine Indian citizens will be included finally. They should not be in tension,” Goswami told VOA.

Rights activist Prasenjit Biswas is a professor at North-Eastern Hill University in Shillong, India. He said the ruling BJP may be using the issue for political gain by claiming the government is trying to guarantee the rights of Assam’s indigenous people.

“So this number of 4 million can act as a potential booster of electoral prospects for the ruling BJP, as the dominant [Assamese indigenous] Asomiya community might see it as freeing Assam of foreigners,” Biswas said in an interview with VOA.

“On the other hand, as these 4 million contain too many Bengali Hindus, their restitution in a later phase by process of filing claims will turn the ruling party into a savior of theirs. Such is a clever electoral game,” Biswas said.

“Each of them is a move on the chessboard of electoral politics, keeping in mind the 2019 parliamentary election,” Biswas added.” https://www.voanews.com/a/citizen-registry-draft-in-india-sparks-concern-in-assam-state/4511118.html

India also trying to get rid of surplus population by sending them to the US:
“India to raise H1B visa issue at ‘2 plus 2’ dialogue in Sept”
August 3, 2018: http://www.indiapost.com/india-to-raise-h1b-visa-issue-at-2-plus-2-dialogue-in-sept/