Trump and his son-in-law Jared Kushner have been friends for decades with Israel’s Prime Minister Netanyahu, as was Trump’s father and Kushner’s parents. Additionally, Trump mega-donor Sheldon Adelson is thought to have invested at least $50 million in Israel Hayom newspaper: “Adelson’s support of Israeli Prime Minister Benjamin Netanyahu has led the latter’s political opponents in the Knesset to sponsor a bill that would prevent the free distribution of newspapers in Israel“. https://en.wikipedia.org/wiki/Israel_Hayom One apparent goal is restricting Iranian oil and gas sales, which will benefit the oil and gas lobby behind Trump; Israeli natural gas, as well as Russian government owned oil and gas companies. 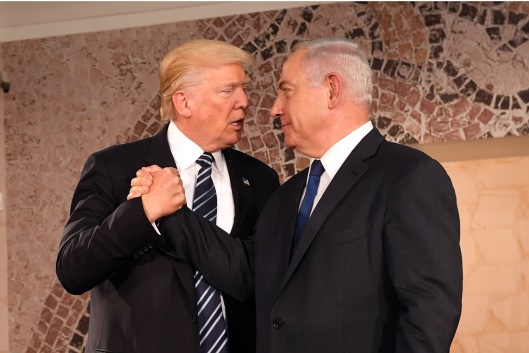 Trump and Netanyahu at the Israel Museum. Jerusalem May 23, 2017 by U.S. Embassy Tel Aviv 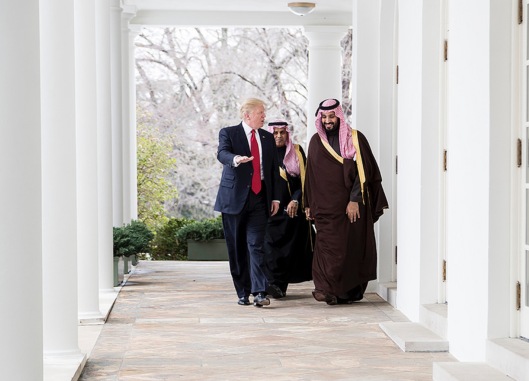 “Surveys over the last several months have suggested that while a majority of Israelis see Netanyahu as corrupt, they would still vote for him.” (Dettmer-VOA news, July 30, 2018)

During a conversation believed to be off-record with French President Nicolas Sarkozy at the 2011 G-20 summit, President Barack Obama didn’t disagree when Sarkozy called Netanyahu a “liar.” And on the occasions Obama and Netanyahu did meet, the strained body language paid testimony to the mutual hostility.

The two clashed over the peace process, Netanyahu’s Jewish settlements policy in the West Bank and the Arab spring.

With Donald Trump in the White House that has changed — a shift dramatically symbolized in December when the U.S. President announced Washington’s recognition of Jerusalem as the capital of Israel and ordered the transfer of the American embassy from Tel Aviv.

The Israeli leader is now feted by a Trump administration which sees him not only as an ideological ally but increasingly, say diplomats and analysts, as an envoy-at-large, blazing a trail for President Trump to Moscow and marshaling his admirers among the populist nationalist leaders of Central Europe as well as orchestrating with the U.S. administration other diplomatic initiatives.

According to Arab and U.S. officials, the Israeli leader has been a key advocate for establishing a new security and political partnership between the U.S. and the six Sunni Muslim Gulf Arab states as well as Egypt and Jordan, in part to counter Iran’s expansion in the region. Behind the scenes, Netanyahu has been building strong security ties with Egypt and the Sunni monarchies of the Gulf, all of whom see Iran and Islamists as threats that outweigh their historical commitments to the Palestinians.

Nicknamed the “Arab NATO,” the Trump administration has been quietly pushing ahead with the idea, officially known as the Middle East Strategic Alliance (MESA).

On Friday, the Reuters news agency reported the Trump administration hopes MESA will be discussed at a summit provisionally scheduled to take place in Washington in October. “Netanyahu has been a sherpa [emissary) helping to guide this effort,” a Gulf diplomat told VOA.

The Israeli leader wields arguably more clout in Washington than any of his predecessors, with some Israeli diplomats bragging sometimes it is hard to know who’s working for whom.

Earlier this month, an Israeli public broadcaster aired a video clip of Netanyahu telling senior members of his Likud party that he had helped to defeat European efforts to dissuade Trump from withdrawing from the Iran nuclear deal and that he was responsible for finally persuading Trump to abandon it.

“We convinced the U.S. president [to exit the deal] and I had to stand up against the whole world and come out against this agreement,” Netanyahu said. And the Israeli leader has been tireless in selling to other American allies Trump’s withdrawal from the deal, signed by Barack Obama in 2015 in which Tehran agreed to nuclear curbs in return for sanctions relief.

In June, Netanyahu went on a whirlwind four-day tour of European capitals, meeting with national leaders in Berlin, Paris and London, part of a diplomatic campaign of attrition, his aides said, to get the Europeans to block Iran’s expansion of its military and political influence in the region.

He got more of a hearing than he would have in the past, say his aides. As his trip wound down, they claimed he had made progress in persuading European leaders that they need to do more to counter Iranian influence in the Middle East and contain Tehran’s military ambitions in the region.

From being isolated on the World stage during the Obama era, Netanyahu, thanks to his ties to the Trump White House, has become a mover and shaker, helping to shape an ‘arc of strongmen’ from Washington to Moscow, where he has nurtured close ties with Russian leader Vladimir Putin, whom he talks with on average twice a week, say Israeli diplomats.

Both President Trump and his Russian counterpart singled out Netanyahu for praise during their joint press conference earlier this month in Helsinki. “We have worked with Israel for decades – there has never been a country closer to us, and Putin is also very close to Israel, we have both talked to Benjamin Netanyahu, and both countries want to help Israel defend itself,” Trump said. The U.S. President said later in an interview with Fox News that he was under the impression Putin is “a fan of Bibi,” referring to the Israeli leader’s nickname.

Netanyahu’s enhanced standing on the World stage stands in contrast, though, to his increasingly beleaguered position politically in Israel, where he is engulfed in a series of corruption scandals and facing mounting public dissatisfaction over the rising cost of living and disapproval of what Israeli academic Jonathan Rynhold has argued, is “his pandering to the political parties which represent the Ultra-Orthodox, known in Israel as the Haredim.”

Nonetheless, Rynhold noted in an expert comment for Britain’s Chatham House: “Polls show that Netanyahu continues to be viewed as the most suitable person to serve as prime minister, even if a majority of Israelis are dissatisfied with his performance.”

Surveys over the last several months have suggested that while a majority of Israelis see Netanyahu as corrupt, they would still vote for him. While his party has slid somewhat in the last few weeks, polls indicate it continues in lead with some analysts saying the drop had more to do with his flip-flopping on social issues than his policy on Trump and the Palestinians.” https://www.voanews.com/a/meet-trump-envoy-at-large-benjamin-netanyahu/4505499.html

Rock the Casbah, 1982, (official video) – video speaks more to the current truth of Trump-Netanyahu-Saudi today than at the time. Link – http://youtu.be/bJ9r8LMU9bQ (NB: Ads are for the benefit of the official youtube channel).