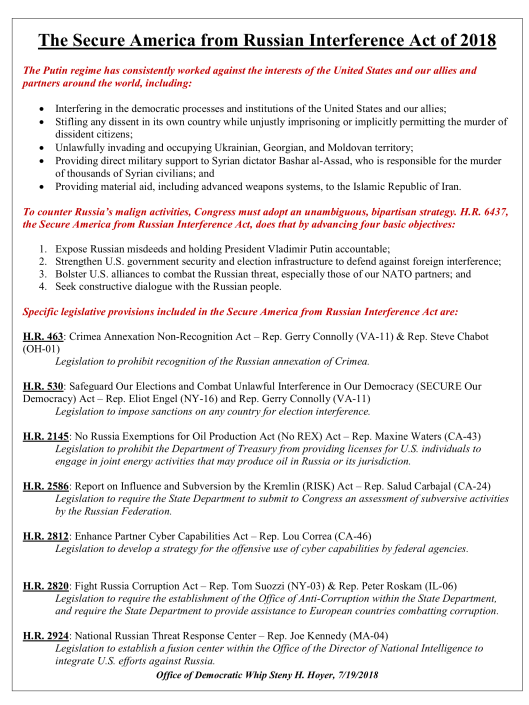 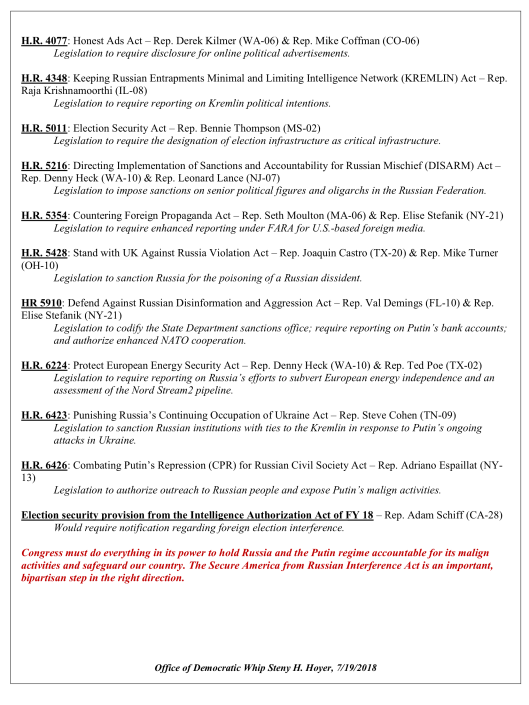 The Putin regime has consistently worked against the interests of the United States and our allies and partners around the world, including:
* Interfering in the democratic processes and institutions of the United States and our allies;
* Stifling any dissent in its own country while unjustly imprisoning or implicitly permitting the murder of dissident citizens;
* Unlawfully invading and occupying Ukrainian, Georgian, and Moldovan territory;
* Providing direct military support to Syrian dictator Bashar al-Assad, who is responsible for the murder of thousands of Syrian civilians; and
* Providing material aid, including advanced weapons systems, to the Islamic Republic of Iran.
To counter Russia’s malign activities, Congress must adopt an unambiguous, bipartisan strategy. H.R. 6437, the Secure America from Russian Interference Act, does that by advancing four basic objectives:
1. Expose Russian misdeeds and holding President Vladimir Putin accountable;
2. Strengthen U.S. government security and election infrastructure to defend against foreign interference;
3. Bolster U.S. alliances to combat the Russian threat, especially those of our NATO partners; and
4. Seek constructive dialogue with the Russian people.
Specific legislative provisions included in the Secure America from Russian Interference Act are:

H.R. 2145: No Russia Exemptions for Oil Production Act (No REX) Act – Rep. Maxine Waters (CA-43)
Legislation to prohibit the Department of Treasury from providing licenses for U.S. individuals to engage in joint energy activities that may produce oil in Russia or its jurisdiction.

H.R. 2586: Report on Influence and Subversion by the Kremlin (RISK) Act – Rep. Salud Carbajal (CA-24)
Legislation to require the State Department to submit to Congress an assessment of subversive activities by the Russian Federation.

Congress must do everything in its power to hold Russia and the Putin regime accountable for its malign activities and safeguard our country. The Secure America from Russian Interference Act is an important, bipartisan step in the right direction.

Note that text version added to facilitate search, both within post and by search engines.