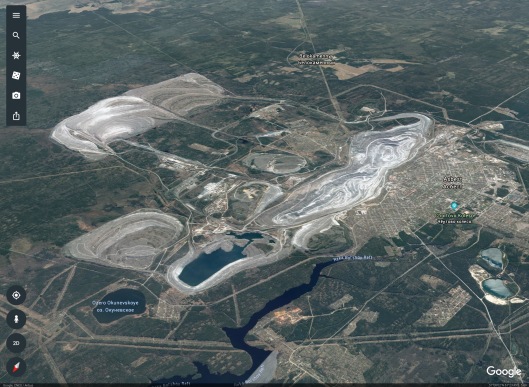 “All types of asbestos cause lung cancer, mesothelioma, cancer of the larynx and ovary, and asbestosis (fibrosis of the lungs). Exposure to asbestos occurs through inhalation of fibres in air in the working environment, ambient air in the vicinity of point sources such as factories handling asbestos, or indoor air in housing and buildings containing friable (crumbly) asbestos materials….” http://www.who.int/ipcs/assessment/public_health/asbestos/en/

According to the US EPA:
“Three of the major health effects associated with asbestos exposure are:
* lung cancer
* mesothelioma, a rare form of cancer that is found in the thin lining of the lung, chest and the abdomen and heart
* asbestosis, a serious progressive, long-term, non-cancer disease of the lungs”
https://www.epa.gov/asbestos/learn-about-asbestos#effects 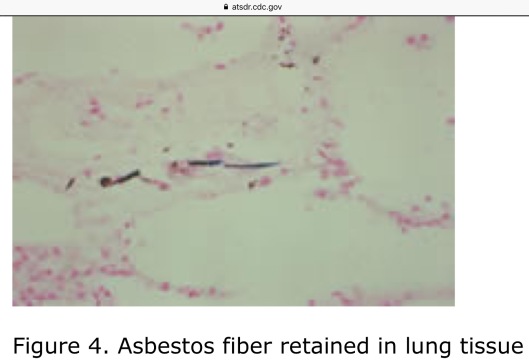 Asbestos liability is probably also at stake:
“Oil refineries are full of asbestos, not just carbon” By Coby Beck on Oct 24, 2008 https://grist.org/article/it-was-asbestos-times-it-was-the-worst-of-times/

“Helping Putin and Russian oligarchs amass fortunes by selling a product that kills thousands each year should never be the role of a U.S. president or the EPA, but this is the Trump administration,” says EWG’s Ken Cook
by Jessica Corbett, staff writer Published on Wednesday, July 11, 2018 by Common Dreams

“Donald is on our side!” declared a Facebook post from the Russian mining company Uralasbest, which put U.S. President Donald Trump’s face and a seal that reads “Approved by Donald Trump, 45th President of the United States,” on pallets of its chrysotile asbestos products.

Praising the Trump administration’s new asbestos policies, which were announced last month, the company’s post thanked the president for supporting recently-resigned Environmental Protection Agency (EPA) Administrator Scott Pruitt, “who declared that his agency would no longer deal with matters related to side effects potentially caused by asbestos,” according to a translation by Guardian.

The post also pointed to the president’s claim, in his 1997 book The Art of the Comeback, that asbestos is “100 percent safe, once applied.” The U.S. Centers for Disease Control and Prevention, meanwhile, found that from 1999 to 2015, asbestos killed at least 45,221 people in the United States alone, and the World Health Organization states on its website, “All types of asbestos cause lung cancer, mesothelioma, cancer of the larynx and ovary, and asbestosis (fibrosis of the lungs).”

Ahead of Pruitt’s resignation—after facing public outrage over his rollbacks of environmental regulations and a mountain of ethical scandals—he published a proposed rule (pdf) on asbestos in the Federal Register on June 11. https://www.epa.gov/sites/production/files/2018-06/documents/epa-hq-oppt-2018-0159-0001.pdf. The rule would allow for approval of “new uses” of asbestos.

Pruitt also revealed the EPA, as Newsweek reported, “will not consider the health risks and impacts of asbestos already in the environment when evaluating the dangers associated with the chemical compound. …That means asbestos used in tiles, piping, and adhesives throughout homes and businesses in the United States will remain largely unchecked and unaccounted for.”

The Trump administration’s policies and Russian company’s stunt come amid concerns among lawmakers that Russia—which has the world’s largest asbestos industry, according to the Center for Public Integrity—will become the United States’ main supplier. https://www.publicintegrity.org/2010/07/21/3447/worlds-asbestos-behemoth

As Chemical & Engineering News noted in December, 95 percent of asbestos used in the United States was previously imported from Brazil, but in November, Brazil banned the mining, use, and commercialization of asbestos.

Responding to the Russian firm’s celebration of the administration’s recent moves on asbestos policy, Environmental Working Group (EWG) president Ken Cook warned,
“Vladimir Putin and Russia’s asbestos industry stand to prosper mightily as a result of the Trump administration’s failure to ban asbestos in the U.S.”
“By allowing asbestos to remain legal, the Trump administration would be responsible for a flood of asbestos imports from Russia and other countries into the U.S., as well as the wave of illnesses and deaths that will continue for years to come,” concluded Linda Reinstein, co-founder and president of the Asbestos Disease Awareness Organization. https://www.ewg.org/release/russian-asbestos-giant-praises-trump-administration-actions-keep-deadly-carcinogen-legal

Considering how many American deaths have been tied to asbestos exposure, Cook added, “Helping Putin and Russian oligarchs amass fortunes by selling a product that kills thousands each year should never be the role of a U.S. president or the EPA, but this is the Trump administration
This work is licensed under a Creative Commons Attribution-Share Alike 3.0 License” https://www.commondreams.org/news/2018/07/11/russian-asbestos-company-puts-trumps-face-seal-approval-pallets-its-products (Additional embedded reference links at the original.)

“Open AccessArticle
Global Asbestos Disaster
by Sugio Furuya, Odgerel Chimed-Ochir, Ken Takahashi, Annette David and Jukka Takala Int. J. Environ. Res. Public Health 2018, 15(5), 1000; https://doi.org/10.3390/ijerph15051000 Received: 13 April 2018 / Revised: 9 May 2018 / Accepted: 14 May 2018 / Published: 16 May 2018
Abstract
Introduction: Asbestos has been used for thousands of years but only at a large industrial scale for about 100–150 years. The first identified disease was asbestosis, a type of incurable pneumoconiosis caused by asbestos dust and fibres. The latest estimate of global number of asbestosis deaths from the Global Burden of Disease estimate 2016 is 3495. Asbestos-caused cancer was identified in the late 1930’s but despite today’s overwhelming evidence of the strong carcinogenicity of all asbestos types, including chrysotile, it is still widely used globally. Various estimates have been made over time including those of World Health Organization and International Labour Organization: 107,000–112,000 deaths. Present estimates are much higher.
Objective: This article summarizes the special edition of this Journal related to asbestos and key aspects of the past and present of the asbestos problem globally. The objective is to collect and provide the latest evidence of the magnitude of asbestos-related diseases and to provide the present best data for revitalizing the International Labor Organization/World Health Organization Joint Program on Asbestos-related Diseases.
Methods: Documentation on asbestos-related diseases, their recognition, reporting, compensation and prevention efforts were examined, in particular from the regulatory and prevention point of view. Estimated global numbers of incidence and mortality of asbestos-related diseases were examined.
Results: Asbestos causes an estimated 255,000 deaths (243,223–260,029) annually according to latest knowledge, of which work-related exposures are responsible for 233,000 deaths (222,322–242,802). In the European Union, United States of America and in other high income economies (World Health Organization regional classification) the direct costs for sickness, early retirement and death, including production losses, have been estimated to be very high; in the Western European countries and European Union, and equivalent of 0.70% of the Gross Domestic Product or 114 billion United States Dollars. Intangible costs could be much higher. When applying the Value of Statistical Life of 4 million EUR per cancer death used by the European Commission, we arrived at 410 billion United States Dollars loss related to occupational cancer and 340 billion related to asbestos exposure at work, while the human suffering and loss of life is impossible to quantify. The numbers and costs are increasing practically in every country and region in the world. Asbestos has been banned in 55 countries but is used widely today; some 2,030,000 tons consumed annually according to the latest available consumption data. Every 20 tons of asbestos produced and consumed kills a person somewhere in the world. Buying 1 kg of asbestos powder, e.g., in Asia, costs 0.38 United States Dollars, and 20 tons would cost in such retail market 7600 United States Dollars.
Conclusions: Present efforts to eliminate this man-made problem, in fact an epidemiological disaster, and preventing exposures leading to it are insufficient in most countries in the world. Applying programs and policies, such as those for the elimination of all kind of asbestos use—that is banning of new asbestos use and tight control and management of existing structures containing asbestos—need revision and resources. The International Labor Organization/World Health Organization Joint Program for the Elimination of Asbestos-Related Diseases needs to be revitalized. Exposure limits do not protect properly against cancer but for asbestos removal and equivalent exposure elimination work, we propose a limit value of 1000 fibres/m3.” Full article http://www.mdpi.com/1660-4601/15/5/1000 (This article belongs to the Special Issue Global Panorama of National Experiences in Public Health Actions to Ban Asbestos)
http://www.mdpi.com/search?authors=Jukka%20Takala&orcid=0000-0001-5722-7052
NB: In the abstract 10 to the power of 9 in the original was replaced by the word billion. See original at link above. https://en.wikipedia.org/wiki/Power_of_10