Recall that Dem primary run off candidate Howard Sherman and wife Sela Ward gave $10,000 to the candidate he proposes to oppose – Mississippi Republican Senator Roger Wicker, at the end June 2017. On May 6, 2016, their niece, Savannah Ward, listed herself as Staff Assistant at the US Senate. Both Mississippi Senate seats were occupied by Republicans: Roger Wicker and Thad Cochran. The Senate was and is dominated by the Republican party. While listing herself as “Staff Assistant at the US Senate” on May 6, 2016, she says that she will be leaving Mississippi for the first time to go to DC, and mentions her Aunt Sela. So, was she working for a Republican Senator in their Mississippi office? And/or was she about to go work in the Republican dominated Senate for the summer, or longer? These are questions that someone needs to answer, especially as she was paid to work on Sherman’s campaign. It also raises the question of if the $10,000 which they donated to Wicker had to do with their niece, rather than simply the millions per year in contracts for their Hope Village foster child housing project? 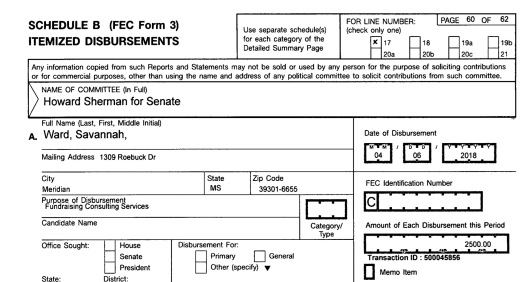 US Senator Murkowski has a job description for Staff Assistants:
“Staff Assistant Job Description 01052018 – Senator Lisa Murkowski
assists person who have appointments with the Senator or other staff members. (e.g., ensures that the Senator’s appointments are on-time and that the Scheduler is aware of a visitor’s arrival);. ○ maintains handout … https://www.murkowski.senate.gov/download/staff-assistant-job-description

Roger Wicker was the chairman of The National Republican Senatorial Committee for 2016.