Convicted and registered sex offender Jeff Epstein’s place, listed in the allegations, is just a stroll through Central Park away from Trump Tower 5th Avenue. It’s a little over a mile away.

Warning: If you have not yet reached the age of majority (adulthood), please do not read this post. In most, but not all places, this is age 18. After the link to Trump attorney Michael Cohen threatening a reporter, the lawsuit-allegations become very graphic-explicit in their descriptions. For age of majority (adult) by location see: https://en.wikipedia.org/wiki/Age_of_majority

One news outlet said that the content of the first filing of the allegations was unbelievable. The opposite is true. Those who have followed Trump will almost certainly recognize Trump’s manner in the accusations. It sounds just like the Trump we’ve come to know since 2016. If Trump is innocent of the allegations, the person who wrote them was a good enough student of Trump’s personality to make allegations which sound like things which he could have said and done. It is very believable and becomes more believable by the day.

Non-graphic excerpt from second filing of allegations against Trump and Epstein of attack against 13 year old girl:
“Plaintiff was enticed by promises of money and a modeling career to attend a series of parties, with other similarly situated minor females, held at a New York City residence that was being used by Defendant Jeffrey Epstein. At least four of the parties were attended by Defendant Trump…

11. Immediately following this rape, Defendant Trump threatened Plaintiff that, were she ever to reveal any of the details of the sexual and physical abuse of her by Defendant Trump, Plaintiff and her family would be physically harmed if not killed….” Jane Doe vs. Trump and Epstein: Case 1:16-cv-07673 Document 1 Filed 09/30/16

This really sounds like Trump! The religious right really knows how to pick ’em. From the first filing.

“Jeffrey Edward Epstein (born January 20, 1953) is an American financier and registered sex offender. Epstein began his career at the investment bank Bear Stearns before forming his own firm, J. Epstein & Co. In 2008, Epstein was convicted of soliciting an underage girl for prostitution, for which he served thirteen months in prison….” https://en.wikipedia.org/wiki/Jeffrey_Epstein

The lawsuits may have been withdrawn, but it doesn’t mean that Trump is innocent. The person may have been threatened, or become too fearful because of the earlier alleged threats.

Michael Cohen threatening reporter: http://youtu.be/t5DGmhbpPUo
Recall that Stormy Daniels alleged that she was threatened in a parking lot. 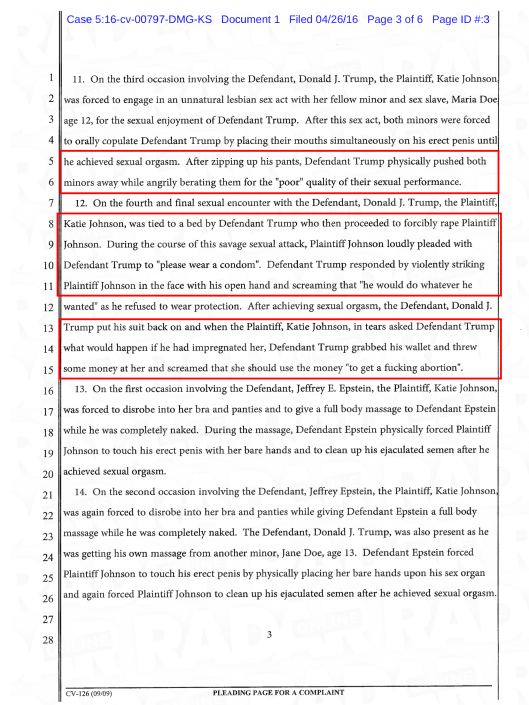 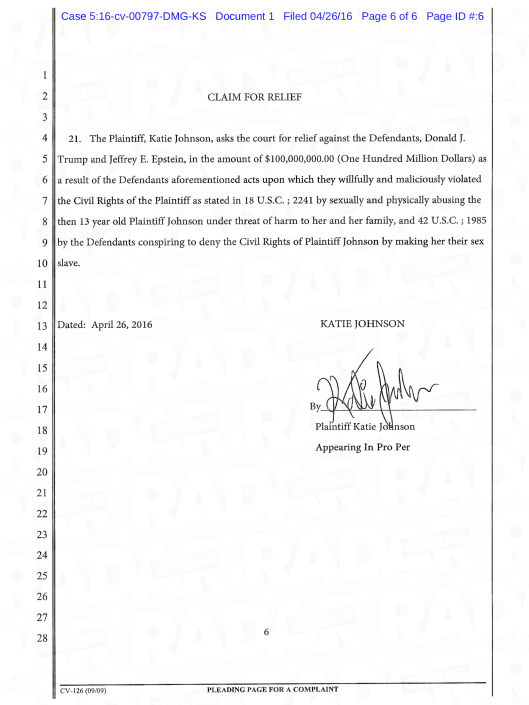 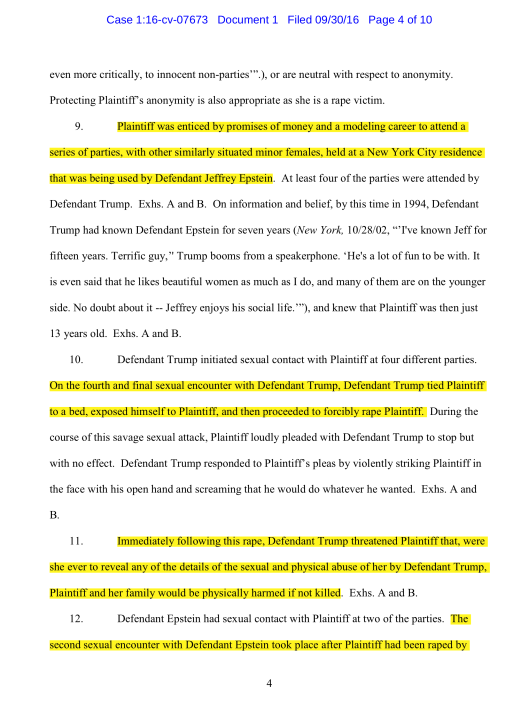 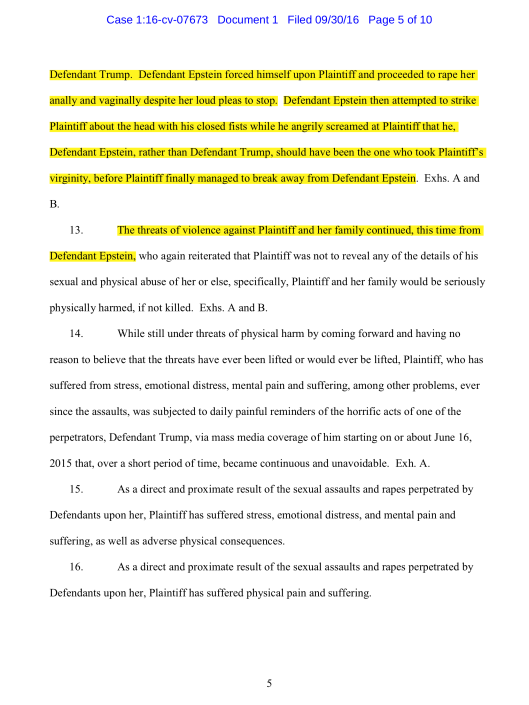 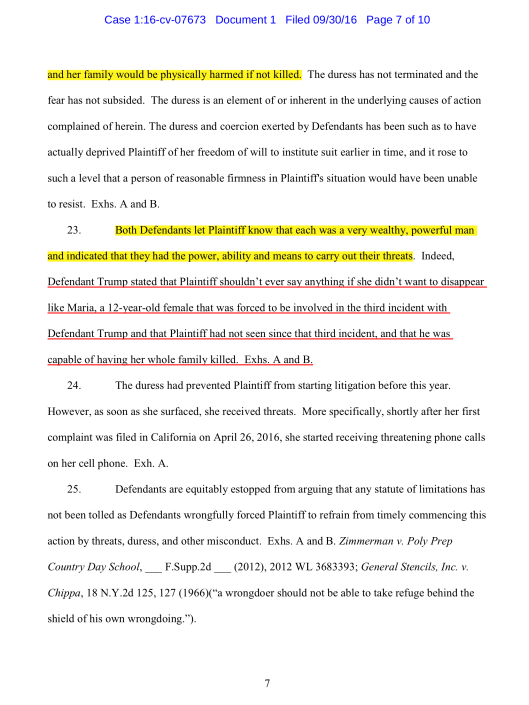 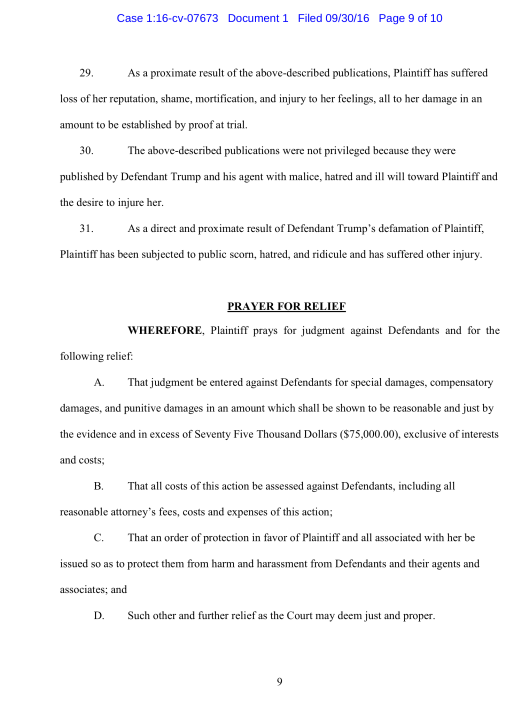 “Donald Trump on witness list for civil case involving billionaire paedophile Jeffrey Epstein US President ‘identified as an individual who may have information’, by Tom Embury-Dennis Wednesday 15 March 2017 19:26 https://www.independent.co.uk/news/world/americas/donald-trump-jeffrey-epstein-civil-case-witness-list-billionaire-paedophile-a7631891.html

Isn't Trump friends with Jeffrey Epstein? And 100+ mobsters? I think we're past the point at which stories about the moral character of the men whose company Trump keeps are interesting. Trump's milieu is, at base, seedy, venal, and criminal. This story only deepens that picture. https://t.co/VApnN765w6